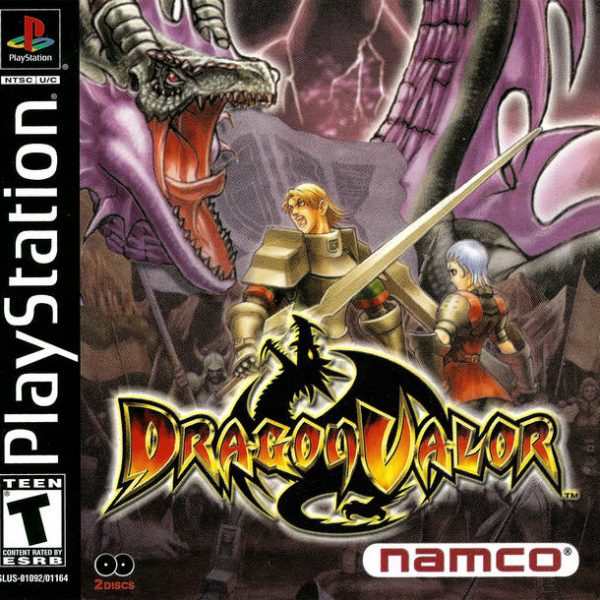 Certain titles in the RPG realm have a tendency to slip past consumers. Sometimes it’s due to timing. Other times it’s due to marketing and lack of advertising. In the case of Dragon Valor, both happened. Worse, it managed to get lost in the far reaches of the forgotten realms along with other RPGs of old. Dragon Valor’s biggest problem is that it underwhelms you in nearly every department. Nothing about the game is memorable and, as a result, not many have played it and not many will wish to play it. Sometimes being average and not aiming for the top is a good, noble feat. Dragon Valor could have aimed higher. I’m glad I gave the game a chance but I wouldn’t be surprised if other RPG fans passed it by for other titles.

The story of Dragon Valor takes place in a medieval world where dragons are the archenemy of all other living things. However, a family of warriors known as Dragon Valors have been the only force capable of stopping these scaled scoundrels. As this struggle continues, a small village called Brize is caught in the crossfire. Literally! People are getting burned by a dragon’s flame! Unfortunately, a young girl named Elena gets scorched and dies in the arms of her big brother, Clovis. After Clovis finishes grieving, he meets a warrior who slowly draws his last breath and gives Clovis a powerful sword made of magic. Now, Clovis is on a mission to avenge his sister and slay the dragons that took everything away from him.

Clovis is out for dragon blood and it’s a great start for the story. Unfortunately, once Clovis’ chapter seems to picking up speed, it ends abruptly. After Clovis finishes off the dragon, the next chapter begins. Clovis will marry one of the two girls he could potentially encounter and their offspring will continue the legacy. In the following chapter, this child matures and becomes the main character, inherits the strengths and traits of his parents from the previous chapter and ventures to fight another dragon. This family lineage feature may offer incentive to try the game multiple times. However, you learn very little about each child and the result leaves you with undeveloped characters, both hero and villain, and a world that doesn’t have much history. Namco should have done more with this seemingly unique feature of carrying on a family legacy as well as the story as a whole.

Playing through the game multiple times may seem tempting if the controls and battles are fun. Alas, Namco missed the mark again. Dragon Valor is an action RPG. On the surface, it looks like there is some fun stuff here. Your character wields a sizable blade that is swung with ease. You can perform a three hit combo, a thrust, an upward thrust, a downward slash, a downward thrust, a running slash, an air juggle, a flying kick and a charged slash attack. Most of the time, the three hit combo gets the job done fine. Enemies are ridiculously dumb, thus giving little reason for you to make use of the evasive maneuvers you have in your arsenal. Your character is also capable of a double jump, which comes in handy during the various platform dungeons. Alongside the sword, your character acquires magic that levels up with finding tombs of various colors. With the exception of a few boss battles, the best magic is your healing spell. You’ll get your typical fire ball, ice spray, a few trap spells and some status enhancers but healing magic will likely be the only spell in your slot. There are no armor pieces or alternate weapons, but you can pick up power ups (and healing items) from defeated enemies. Some last the entire game while others last for a chapter.

It all sounds good but there is something missing: speed. Dragon Valor is short, but also slow. Not only do the dialogue events display the words on one speed, they progress automatically. You can skip them, but you’d miss out on what little story is available. Shopping is worse. You can only visit shops once as you progress through the one-way only path. When battling, your character walks slow. Annoyingly slow. You might as well tape down the L2 button, which allows you to run, because you’re not going to be getting anywhere with the normal walking pace. Combat isn’t that engaging, either. Some of the boss battles are fun, but those are too few and far between. Namco could have, once again, done more with the action. Your character has an arsenal of attacks, but it’s rare for you to find a reason to use them all. The usual boss strategy is to wait for an opening and use your three-hit combo. Then run away or double jump away from attacks, heal if need be and go back for another attack.

This especially comes as a downer because at a glance, Dragon Valor’s 3D polygons make it look like a solid action game. Well, solid for the time. Aside from a thrilling opening full motion video with more dragons than tabletop session, the character models look ridiculous compared to games these days. Picture a bunch of colors and shapes put together that don’t match and that will give you some idea of what to expect for Dragon Valor. Monsters didn’t fare much better. Environments look fine, but this is a game that could have gone the 2D route like Valkyrie Profile or Tales of Eternia. Instead, the creators wanted to fit in with the rest of the 3D world. It’s a shame because the actual character art is gorgeous. Luckily, the music composed by Nobuhiro Ouchi is fantastic. The style of music is 1980s pop meets glam-rock meets Japanese anime. No question, the soundtrack in Dragon Valor is the best thing about the game. The script is read in silence, but your characters will shout and grunt when they attack enemies.

Hopefully you’re not getting the wrong impression from me because Dragon Valor isn’t that bad of a game. Instead, this is a title that is terribly average. Average is boring and no one wants a boring action RPG, especially when the central focus is something cool: dragons. Boss battles can be fun and there is something unique with creating the family tree. Unfortunately, most of the game is spent slowly moving from one place to the next and combating foolish enemies with a standard three hit combo. Finishing the game once takes only seven hours, so you’re better off borrowing this game from a friend if you really can’t get enough dragons or action RPGs in this era. Those who enjoy it will undoubtedly go back for more and try different brides to see different sides of the story. Finishing the game unlocks an art gallery which allows you to see the lovely character art. Dragon Valor could have been another special gem of video game from the golden era of RPGs. Unfortunately, due to some silly features, ugly graphics and lack of a meaningful story, it gets lost in the depths of the forgotten video games abyss. Still, be sure to check out the soundtrack if you ever get the chance.