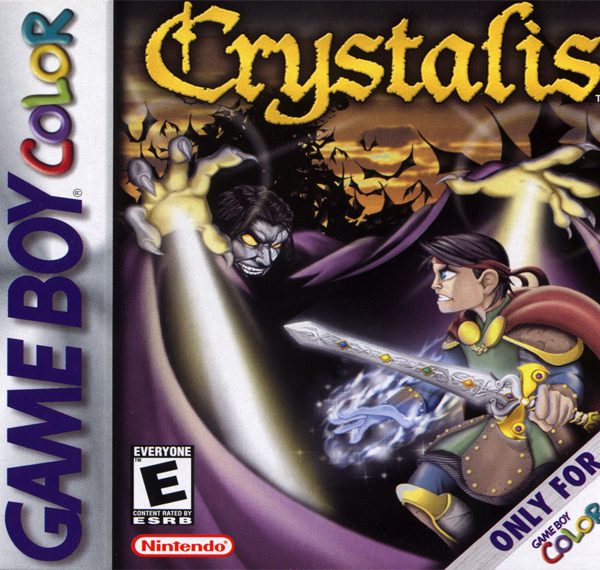 Author’s Note: This review was originally published on October 9th, 2003. I finished Crystalis years before writing the review; I think I was bored and wanted to “share my thoughts” with the world. I still have a low opinion of this version of Crystalis, but it’s not nearly as fanboyish as displayed in this old review.

Crystalis was a game on the NES. I never got to try it, but when I heard that it was getting remade for the Game Boy Color, I was interested in it (and was getting ready for a long trip).

Story: 4/10
After a long war ended, the world was slowly dying. In order to rebuild this world, magic was used. An evil person named Dragonia decided to mix magic and technology together. Four wizards decided to play hero and created four magical swords of the elements: Fire, Water, Wind and Lightning. The swords merged to form Crystalis. It was intended for this sword to destroy Dragonia. Well, Dragonia broke the Crystalis into the previous four swords. According to legend, a hero will find the swords, create the Crystalis, and defeat Dragonia.

They explain all of that to you in the entire opening. There are no plot twists, climaxes, or anything. I never played the original NES game, but if it’s anything like this version, I’ll pass on it.

Gameplay: 7/10
At first the game is a lot of fun. It plays a lot like Zelda and Seiken Densetsu. You walk around the field, slashing monsters with your sword, cast some magic here or there, you talk to people, and buy new armor. When you equip certain accessories, you can do special attacks with your sword which is always exciting. There are also a lot of nifty side quests that can be done in order to get new armor and items. But you’re going to be doing all of this for the entire game. You’ll go to town, get some information, and go fight the baddies. This sounds similar to most action/RPGs, but Crystalis has no addictive drive that keeps you coming back for more. The gameplay just lacks a certain something that makes the adventure fun.

Characters: 6/10
You get to meet with the four wizards in this game, and each one has different pieces of helpful information. But other than that, there are no characters that develop. The hero is a mute, so you don’t get any reactions from him.

Graphics: 8/10
These are good, especially for a Game Boy Color. The backgrounds have a lot of nice detail in them. The character sprites are large and also have some detail in their costume design. The nifty special affects for doing power attacks are actually pretty cool the first couple of times.

Music and Sound: 2/10
The music is TERRIBLE! Oh my god…turn off the volume and put on a CD, or the TV, or both. All the tunes are very off pitch, it’s quite painful.

There is actually a small bit of voice acting in this game. That’s actually quite commendable, given what system they’re dealing with. Other than that, the sounds are pretty bad as well.

Replay Value: 5/10
Once through (or none through) is plenty. The only reason I see someone coming back is to get things they’ve missed. I didn’t care, and just sold it after I finished it.

Difficulty: Hard
This game is pretty difficult. You’ll have to do a lot of level building in order to fully pass the final dungeon (which is not a joy, I might add). It really gets tedious at certain points in the game.

Buy or Rent: Rent
Rent this game to see if you are willing to stick with it. I bought it, and I kind of wish I didn’t. It really comes down to whether or not you greatly enjoy action/RPGs.

Crystalis had potential, but it wasn’t that great in the end. Some may enjoy it, others will wish to break it. It does have some interesting elements which I’m sure were great during the NES times, but I feel that some improvements could’ve been made.