Live a life in Live A Live.

Create your perfect world in Legend of Mana Remastered. 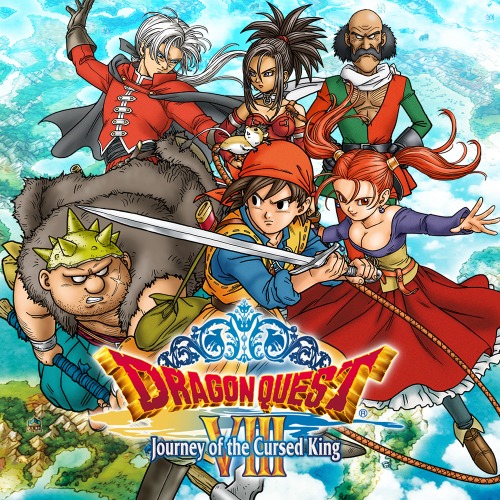 Playing the Nintendo 3DS version of Dragon Quest VIII is a reminder of how finite the battery life of a portable console is. This tiny cart is packed with content that led to hours upon hours of game time. Keeping an extra charger close by was necessary. Originally released on the PlayStation 2, Dragon Quest VIII: Journey of the Cursed King has been ported to the 3DS and filled with new stuff. Fans of the series will eat this up regardless of playing the original on the PlayStation 2 or not. If you’re new to Dragon Quest VIII and are given the choice, then I recommend this modern 3DS version.

The diabolical jester Dhoulmagus has stolen an ancient scepter from the Kingdom of Trodain. This unleashes a curse upon the kingdom. The townsfolk are put into a deep sleep and the castle’s architecture gets covered in thorny brambles. The king is transformed into a green imp and the princess gets turned into a horse. The only one who remains unscathed from the sudden chaos is a castle guard that happens to be the hero of this tale. Together with the king, the princess, and the ugly ex-bandit Yangus, you need to get the scepter from Dhoulmagus and lift the curse. The premise is uninteresting. Oftentimes it’s predictable. However, there’s a sense of grandeur to it. The world in DQVIII feels larger than it has in previous games. You meet a lot more characters, venture through more locations, and there are multiple antagonists. The characters and setting will always be enough to keep you going. Well, most of the characters. Two personalities that are with you from the start (Yangus and the king) are irritating. Their constant antics are a sad attempt at comedy relief. When it was their turn to speak, nine times out of ten I rolled my eyes or cringed. The rest of the main cast, thankfully, have more dimensions. Party Chat lets you see their thoughts on the current situation and adds a welcome layer of personality to each character.

Dragon Quest VIII is modern looking game with classic features. If you have any familiarity with the series, then you’ll have a good idea of what to expect. The hero and his party will travel through a vast world armed with their weapons, magics, and ambitions to stop Dhoulmagus. Towns will act as pitstops where everyone can obtain new gear, learn the latest gossip from the locals, rest at an inn, or utilize the services of the church. Churches provide a variety of services but the two most useful are seeing how many experience points are needed before characters level up and saving the game. While this version of DQVIII features a Quick Save option, performing a standard save can only be done at a church. It’s an outdated feature that really needs a facelift. Finally, most towns will have important NPCs that provide you with the next story objective. When it’s time to leave, you’ll find yourself on an expansive world map that is a blast to explore. Wandering from location to location on foot, on the back of a giant cat, by boat or in the air is always enjoyable because there’s a lot of neat stuff to discover. Dungeons are also fun to explore. Some have simple puzzles whereas others are mazes filled with expansive corridors. Entering a new area for the first time adds to that grand sense of adventure.

Combat in Dragon Quest VIII uses a tried-and-true turn-based battle system. Battles begin when you run into an enemy. Both your team and the enemy team take turns slapping each other around until one side falls. After battle, you’re rewarded with experience points, money, and sometimes an item. The usual joys and sorrows of Dragon Quest’s combat are in full force. The diverse party means a lot of variety. Characters will earn Skill Points when they level up which can be distributed towards various specialties. Watching your favorite party members become more and more powerful with their unique abilities is rewarding. On the negative side, there are enemies that will seemingly jump the turn order, a lot of overpowered enemies capable of one-shotting your teammates, bosses being able to attack upwards of three times, and the inability to access all your items in your item bag. Again, if you’ve played a Dragon Quest title then you know what to expect. Unlike some of the other modern games I’ve played, I found Dragon Quest VIII to be challenging. I never got completely wiped out, but there were times when I feared the worst.

Dragon Quest VIII is a beautiful game. I say this as the furthest thing from an Akira Toriyama fan, too. Seeing this lush world filled with varying characters and monsters is a treat to behold. Spell effects and abilities have just enough pizazz to keep each battle as fresh as possible. Half the fun of exploring comes from seeing each new area for the first time. Things aren’t as great in the audio department. The music isn’t anything special and the voice acting will be a hit or miss depending on the player. For me, the voice acting was a miss because my least favorite characters (Yangus and the king) got the most lines. Luckily, you can adjust all aspects of the audio as needed. I turned voices off and it made things more enjoyable.

Another handy feature in the 3DS version is the option to increase the speed of battles. This made a world of difference in keeping the momentum going. Other 3DS exclusives include using the console’s camera to snap photos for a rewarding side quest, both Red and Morrie joining the party, hefty post game content, and secret endings to unlock. When all was said and done, I managed to get a solid 65 hours out of Dragon Quest VIII. However, those that wish to see and do it all will be looking at more than 100 hours. Surprisingly, there’s a lot of replay potential. There’s different ways to build your characters, as well as some secrets that you might not find during your first run. I can see myself going back for another run down the road. Hopefully, my 3DS will be able to endure all of those long game sessions again. While Dragon Quest VIII is playable on the PlayStation 2, I highly recommend the 3DS version. Just remember to keep the console’s charging supplies handy.

Overall, 7.5/10: A solid port of one of the most cherished entries in a classic series. Dragon Quest VIII on the 3DS will satiate all RPG fans that want a familiar game with modern touches.