Rejoice! SaGa Frontier has been remastered!

Live a life in Live A Live. 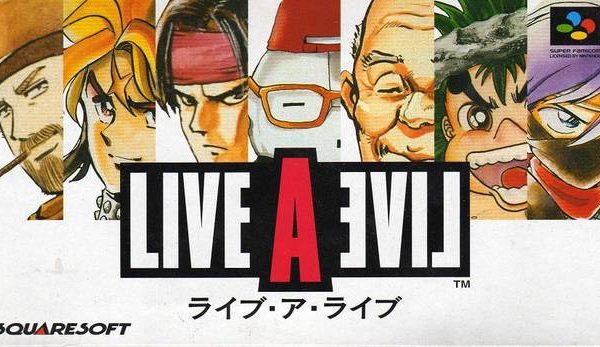 When someone mentions RPGs and the Super Nintendo, I immediately think of Squaresoft excellence: Final Fantasy IV and VI. Chrono Trigger. Secret of Mana. These are games that have stood the test of time and are easy to play over and over. One game from their library that didn’t get localized for westerners was Live A Live. It’s hard to tell whether or not the game would have been as well received as some of Square’s other hits. Thanks to the efforts of Aeon Genesis, a translation is available. Live A Live is an unbalanced but charming RPG. There’s also a surprising amount of edginess to it that might have offended Nintendo of America’s delicate sensibilities at the time.

I have a couple of theories regarding why Live A Live never officially made it to our side. The first has to do with its presentation. During exploration, things look par for the course for a 90s Squaresoft title. The 2D sprites on top-down field maps are a classic, enduring look. Live A Live’s variety of characters and scenarios mean you’ll be looking at tons of different locations: office buildings, spaceships, caves, wrestling rings, and much more. The character sprites are expressive despite their smaller size. The graphics are at their best when you’re in combat. You have stunning sprite work with equally stunning animations. You also have some racy enemy and monster designs that would have made the censorship police at Nintendo of America clutch their pearls. The level of creativity is amazing, but I’m betting some people will be offended. One final note on the presentation: the music is sublime. This was Yoko Shimomura’s first game project and it sounds like a masterpiece.

My second theory regarding a lack of an official localization has to do with the story. Or rather, the stories. Live A Live has a clever method of storytelling. You pick from one of seven scenarios that take place in a different era. A ninja on a mission to overthrow an evil warlord. A robot attempting to help its crew arrive safely to Earth on a carrier spaceship. A lone gunman in the wild west that offers his services to a small town to stop a gang of bandits. Players will pick one character/scenario, play it to its conclusion, and then move on to the next. Many of the stories feature dark, moody, and taboo themes. You might be wondering what happens when you complete all the stories. Without stepping into spoiler territory, you’re rewarded with an eighth scenario. Completing this will unlock a ninth scenario. These tie the sagas together into a morbid epic that is unlike anything you’ve seen. It’s worth it to see things through to the end.

Some scenarios are easier to complete than others, and a few of them offer enough variety to give them a second go around. For instance, the Secret Orders scenario will reward you if you kill zero enemies or if you kill 100 enemies. The Contact scenario has a couple of hidden extras and a secret boss. Each scenario doesn’t take long to complete, either. I think the longest one (not including the final scenario) during my time totaled three hours. Gameplay outside of combat is straightforward. Some scenarios have places for your MC to shop or create custom gear. Others require you to talk to the right individuals to move the plot along. It’s standard stuff. The turn-based combat is standard, too. It takes place on a 7X7 grid with your team and the enemy randomly placed at the start. Each team member can take their turn to move, use an attack, use an item, or pass their turn. Some attacks require charge time. This offers some strategy since enemies might move out of the range of an attack. Combat is finished when all enemies are defeated, or all your team members are down. An interesting feature is that knocked out team members can be revived with any healing item or skill. However, if they’re attacked again while at 0 HP, then they’re permanently out of the battle. Finally, the grid can be filled with special tiles that provide healing or continuous damage.

Live A Live’s combat is easy to understand, but it’s also tedious and unbalanced. The tedious part can range from enemies being just out of reach with your favorite attacks, a high random encounter rate depending on the scenario, scarcity of items, or a lack of decent experience even after a tough encounter. I think I’d be able to overlook these issues if the game didn’t have so many difficulty spikes. Going through the motions in most of the scenarios will cause a roadblock since you can save your progress anytime. These can be from tough bosses or random monster hordes. Battles will go from being over in a few seconds to being over after fifteen minutes fighting for survival. A lot of patience (i.e. grinding, trial and error, etc.) is needed to get through the later/best parts of the game. I think it’s worth it, but there are many moments of frustration along the way.

Live A Live is a short game with multiple endings and a fair amount of replay ability. I finished the game in about 20 hours with most of that time spent in the final scenarios. On the surface, the game is unpretentious and charming. Its structure isn’t built for long playthroughs making it easy to pick up and play. The further you get and the more scenarios you complete, the charm is traded for something deeper. Sadly, the gameplay has a hard time keeping up. The game doesn’t outstay its welcome, but combat will get tedious sooner than later. Come equipped with patience before living the lives of very different individuals from across time. It’ll serve you well as you experience everything offered in one of the most unique Super Famicom games of all time.

Overall, 6.5/10: Live A Live is filled with quirks and personality. It’s also an exercise in patience. Despite that, it’s still worth your time.