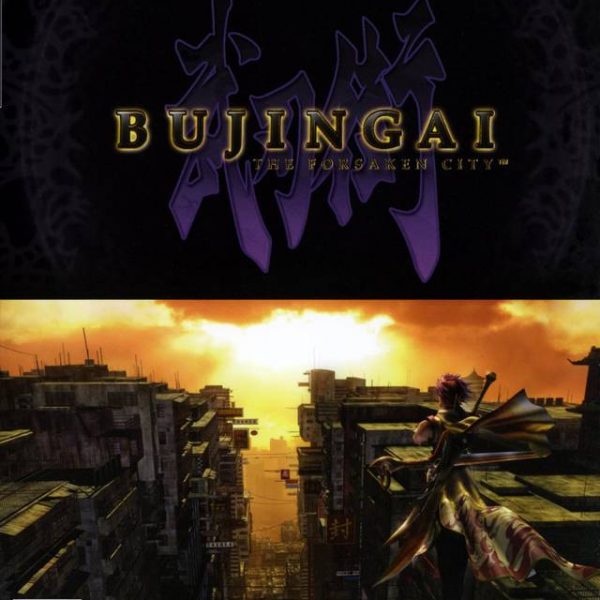 If you wanted to count the number of third-person action games on the PlayStation 2, then you’d be busy for hours. Indeed, my favorite console of all time is filled to the top with action games that range from unplayable to unforgettable. Bujingai: The Forsaken City falls somewhere closer to the unforgettable status despite its problems. If you feel like the well has run dry with hacking and slashing on the PlayStation 2, then consider Bujingai: The Forsaken City.

Bujingai’s story is easy to dismiss. It takes place on Earth in the very distant future. After some nuclear experiments went awry, most of humanity was wiped out. Those that survived were granted powers. To make things worse, a dimensional rift was opened that, naturally, caused demons to start gushing in. A demon has possessed the body of Rei Jenron, a master swordsman. Hellbent on destroying what remains of Earth, Rei begins his goal in the abandoned city of Bujingai. The only one who can stop him is fellow master swordsman and rival Lau Wong. Now, here is where things start to get a bit fuzzy with the story. Lau appears from outer space while riding on a cloud. Like, he just shows up out of nowhere and is ready for action. It’s strange. As Lau continues to fight his way through Bujingai and its surrounding areas, flashbacks shed some light on what happened to turn Rei into a demonic host. Like I said, the story can easily be ignored. Lau is a silent protagonist, so he doesn’t have anything to say about the situation, anyway.

Bujingai’s is at its best and worst when you take control of Lau and command him to slash apart multiple demons of varying shapes and sizes. Usually, Bujingai is an absolute delight to play. Inspired by old Wuxia movies, combat in Bujingai is festive and highly choreographed. Lau is a nimble warrior that wields two swords. Using the square button, you can perform a standard set of attacks. The triangle button lets Lau perform a spinning attack that is great for situations where he is surrounded by enemies. While performing the combo with the square button, you can hit the triangle button to set up a new combo string. These include the aforementioned spin attack, a sword-uppercut, a bicycle kick, or a magic spell. Lau can find and equip various magical abilities. They range from a fireball to a ballet inspired whirlwind to a shower of arrows. Some spells increase his defense or attack at the expense of decreasing the power of the other. One of the most important things Lau can do is deflect attacks from his enemies. Next to his health, Lau has a defense meter that will decrease with every deflected attack. During his deflecting, you can press the square button to begin a powerful counterattack. This is critical to use with more powerful enemies. Magic can countered, too. Instead of deflecting, Lau will gather energy and attempt to push the spell back towards the foe. These are the most powerful attacks you can do.

Lau is a strong warrior, but he’s also a nimble one. He runs at a brisk pace, can dodge and evade, and has a unique jump follow up. Instead of a typical double-jump, Lau will glide for a couple of seconds. Tilting the left stick will alter his course. Lau is capable of running alongside and up walls, performing rebound jumps, and swinging across poles. Using these techniques, you can discover golden coins hidden in every level. Collecting these will unlock bonuses. Other collectibles include blue orbs that are used to increase Lau’s abilities, yellow orbs that are used to restore health, red orbs that are used to restore magic, spell upgrades, and keys that are used for a specific level.

Most of the time, Bujingai is great. Lau will dance and dismember enemy upon enemy with martial art mastery and grace. But, that same level of mastery is what causes Bujingai to take a stumble. I’m not even talking about the fidgety camera. Nothing that Lau does is simple. Every action he performs is like an elaborate dance. If you’re trying to land a simple jump, then you’ll have to pay close attention to your distance. If you’re fighting a group of enemies by a cliff, you need to make sure Lau’s attacks don’t cause him to fall off of it since his motions are so exaggerated. Later stages have tricky platforming sections that require careful use of Lau’s glide. The overall challenge in Bujingai is on the lower side since Lau has so many options and upgrades. However, you can still find yourself running out of health very quickly. A generous continue system lets you pick up where you failed, but your overall score will be lowered. Depending on how well you do at the end of a stage, you’ll be rewarded with extra blue orbs. It’s frustrating knowing that your score could have been higher if Lau didn’t flail himself off of cliffs so much.

Bujingai: The Forsaken City is a gorgeous game with settings and characters that match the over-the-top action. Japanese pop culture icon Gackt plays the role of Lau. Motion capture technology was used to create his likeness and part of his move set. It’s neat seeing him in such a unique role, but at the same time, it feels like a good fit for him given Lau’s flashy persona. Enemy design is interesting, but not as varied as I hoped. You’ll be fighting the same enemy with palette swaps many times throughout the game. Boss designs are cool, but there are only a handful of these. In fact, you will have to fight the same boss multiple times. The music in Bujingai is excellent. The Chinese-themed instrumentals mixed with both rock and synth work well. There is never a dull listening moment. The voice acting is serviceable. The Japanese version features some respectable voice talent, but our version lacks a Japanese language option.

Other than the game working against itself, Bujingai’s most glaring issue is its length. While the game pushes you to return to previous stages to better their scores, going through it once only takes about seven hours. Collecting all of the gold coins will let you access movies, interviews, character data, and more bonuses. Finishing the game also unlocks a higher difficulty. Even then, the game can still be completed in little time. It’s a shame that the game ends so quickly because it’s an overall good time while it lasts. If you watch the interviews you unlock by finding the gold coins, you’ll notice that Bujingai: The Forsaken City was a labor of love. It’s clear that Taito and Red wanted to create an action game that stood out from the crowd. I think they succeeded, but there are times the game stands out a bit too much. These incidents are few and far between, but they happen. Despite these issues and its short play time, I recommend Bujingai: The Forsaken City to all PlayStation 2 owners looking for yet another solid action game.

Overall, 7/10: Bujingai: The Forsaken is a stylish and sleek action game that sometimes trips over its own stylishness and sleekness.