How many damn steam-rooms does Dracula really need? 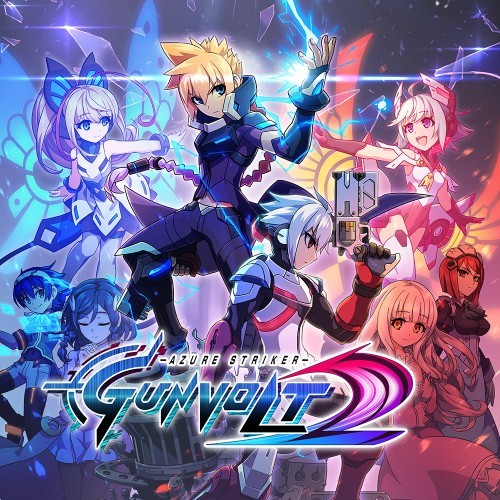 One of the coolest villains in the first Azure Striker Gunvolt was a scientist named Copen. There wasn’t much revealed about him, but one thing was for sure: he despised adepts and had the ability to decimate them with his unique gun. I wanted to see more of Copen, and of course, I wanted to see more of Gunvolt. Azure Striker Gunvolt 2 delivers on both fronts. This is a sequel that manages to be greater than the progenitor due to the retention of the game play mechanics that worked and the addition of new features that make the game worth playing twice in a row.

After the events from the first game that caused him to be spiritually fused with Joule, Gunvolt has been under the radar. Of course, the quiet doesn’t last as new threats start to loom on the horizon. With the aid of his new friends, Quinn and Xiao Wu, Gunvolt embarks on a new mission to put a stop to the group known as Eden. Eden is composed of powerful adepts that wish to eliminate all humans. Gunvolt, sporting his new digs and his electric powers, gets ready for action. However, he’s not alone. Copen also has his sights set on Eden. The two warriors promise to stay out of each other’s way in order to fulfill their own objectives. This means that there are two campaigns to experience, one with Gunvolt and one with Copen. Both stories retain the fantastic writing from the first game, and the new heroes and villains keep things fresh from the moment the game begins.

With Copen sharing the stage with Gunvolt, you have two adventures to look forward to playing. Gunvolt’s is the more familiar of the two since he has kept all of his abilities from the first game. He can dash, bounce up walls, jump, and fire bullets from his unique guns to tag enemies. Once an enemy has been tagged, he can use his Flash Field ability to send bolts of lightning directly towards them. Using his Flash Field also allows him to slowly drift downwards. Of course, relying too much on his Flash Field will cause him to overheat and he won’t be able to use it for a few seconds. Gunvolt has access to special skills that can be assigned to the X button. For Azure Striker Gunvolt 2, he can equip new parts, new guns, and learn new abilities upon leveling up. Finally, there are a variety of challenges you can try to finish in order to earn materials used in synthesizing new gear.

Playing as Gunvolt is still a joy, but playing as Copen offers a new perspective that keeps the action going if you get tired of zapping enemies into oblivion. Copen can perform similar actions, such as the dash, the wall climb, and the standard jump. Copen’s weapon of choice is a powerful gun that deals greater damage than Gunvolt’s. However, Copen’s gun cannot be modified. Furthermore, his gun isn’t used to tag enemies. Instead, Copen uses an air dash to ram into enemies, tag them, and then use his gun to focus on the enemy. His air dash allows him to rebound and ricochet from enemy to enemy; impressive acrobatics result in enemy after enemy getting tagged. Since Copen can only tag one enemy at a time, it’s critical to master his air dash and plan routes accordingly. Copen’s air dashes are not infinite. His suit relies on resources called Bullits. Missing a target during an air dash will result in the loss of a Bullit. Similar to Gunvolt, Copen can activate a quick charge to reload his Bullits efficiently. The fun doesn’t stop there. Copen’s suit can equip a variety of subroutines that provide enhanced effects. Furthermore, defeating a boss will grant Copen a new gun, similar to a classic Mega Man title. Copen has other tricks up his mechanical sleeves to see his way to victory, but I’m sure you get the idea.

No matter which campaign you select, you will be treated to the same sleek visuals from the first game. New bosses and enemies, new levels, and plenty of colorful animations provide a visual sensation. The music is expectedly great; perfectly matching the futuristic, cybernetic and technology driven world Gunvolt and Copen call home. The majority of the script is fully voiced in Japanese. During most boss fights and stages, you can experience back and forth dialogue between the characters. It’s a nice touch, but it’s distracting. I wish there was a way to enjoy it without constantly getting hit by enemies.

Both Gunvolt and Copen offer provide hours of entertainment. While it’s possible to finish both campaigns in about two hours apiece, it’s always fun (and recommended) to go back to previous levels to participate in challenges, acquire new raw materials and synthesize new gear. Overall, Azure Striker Gunvolt 2 can last a long time depending on how much you want to do. Those that really wish to challenge themselves can participate in Runner Mode, which can add even more time. All of this content adds up to make Azure Striker Gunvolt 2 an excellent platform adventure. Inti Creates kept everything that made the first game so successful, and they added the right amount of new features that managed to make things more enjoyable. I highly recommend Azure Striker Gunvolt 2 to everyone looking for a great game.