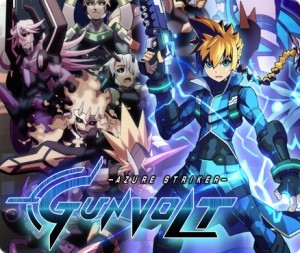 While slightly different from traditional Mega Man and Mega Man X titles, the Mega Man Zero series created by Inti Creates was a challenging and sleek 2D action series that featured Zero in his own game. Continuing with ZX and ZX Advent, Inti Creates showed that they really knew what they were doing in showing deference to Capcom’s most iconic character while standing apart from the OG titles. Taking cues from those games, they have created and published a new series that all fans of the Mega Man universe will undoubtedly enjoy: Azure Striker Gunvolt.

Azure Striker Gunvolt takes place in our world in the distant future. Certain humans have developed powers called Septimal Abilities that allow them to manipulate the elements or perform feats that normal people could never dream of doing. These “people” are known as Adepts. One particular Adept goes by the name of Gunvolt (GV to his friends) and works as an agent for an organization called QUILL. GV’s latest mission is to infiltrate the Sumeragi Group in an attempt to assassinate an Adept capable of manipulating other Adepts. The target ends up being a young girl named Joule that houses Lumen, the Adept in question. Defecting from QUILL, GV takes Joule under his wing in order to protect her from the Sumeragi Group.

Azure Striker Gunvolt’s story is surprisingly detailed for a 2D action game. There is a ton of lore behind the world of Septimal Abilities, Adepts, Lumen, QUILL, and more. Even better is that the game has a fantastic script with some modern dialogue that really pulls you in. GV has a smart mouth, but deeply cares about his friends and making the world a better place from the Adepts that want to cause harm. Watching his relationship develop with Joule/Lumen and some of his old friends from QUILL makes the game more than just a run and gun adventure.

However, the real draw to Azure Striker Gunvolt is the game play that feels like a Mega Man title with a modern twist. Fans of the Mega Man Zero series will feel most at home, but anyone familiar with the lore of the blue bomber will be able to adapt and adjust in a matter of minutes. GV can equip a variety of accessories, guns and medallions to give him bonuses. He can also gain experience points from defeating his enemies, which allows him to level up and grow in power. Players will immediately get accustomed to GV’s abilities to jump, dash, and kick off of walls. His gun doesn’t provide much in the ways of damage, but it does allow him to tag his enemies. When an enemy is tagged, GV can use his Septimal power of lightning to send bolts of electricity to the enemy. This deals significant damage, and the more an enemy is tagged, the more damage is dealt. Defeating an enemy grants you points known as kudos. By defeating multiple enemies, defeating enemies in the air and/or defeating an enemy with a full tag, you will earn more points and more kudos. Reaching 1000 kudos will cause the background music to change. However, if GV gets damaged, the count resets back to zero. The action is fast, the stages are full of traps and enemies, and it takes practice and timing to fully utilize GV’s abilities for each circumstance. Using GV’s lightning has a limit, too. If you use it too much, he will overheat and it will be unavailable for a set amount of time. Even worse, this leaves him more vulnerable to damage. Since his lightning abilities can be used to glide from a jump, there will be times you run out of juice and end up falling down a pit or on some spikes.

The action is a blast most of the time. However, there are certain times things can be too chaotic. This especially occurs during the boss battles. Each boss has a Septimal Ability that has just as much flash and destructive power as GV’s lightning. The screen can become crowded with particles, colors, projectiles and more before you know it. As you try to dodge and tag and zap an enemy, chances are you’ll be suffering damage because there is too much going on. Luckily, GV has access to skills that can be used by tapping the bottom screen. These can damage foes or help GV when he’s in a pinch. However, they have limited use. Bosses will be the trickiest part of GV, but they are very rewarding when you finally defeat them.

When a stage ends you will receive a rank based on your kudos and your completion time. You will also get to play a mini-game in which you uncover parts. These parts are used to create new pieces of equipment. Stages can be revisited for the sake of completing Challenges. Finishing Challenges is the best way to earn more parts for synthesis equipment due to the RNG of the aforementioned mini-game. GV can also speak with Joule between stages to build his relationship with her. He can also give Joule special gems that are hidden in the game’s stages.

Azure Striker Gunvolt is a graphical masterpiece that looks good with or without the 3D effect turned on. The 2D graphics feature crisp sprites and vibrant backgrounds. The art style has a look that is reminiscent of Mega Man Zero, yet it has plenty of originality. The music isn’t as memorable, but its techno and electronica inspired tracks help add to the setting.

Azure Striker Gunvolt has two endings, both of which can be easily obtained. With a variety of challenges, plus the overall “Mega Man” feel to it, this is a game that has tons of replay value. Finishing the game the first time might take a good five to six hours, but I can see most people replaying the game over and over again. Aside from the boss battles getting too distracting, this is a fantastic game through and through.