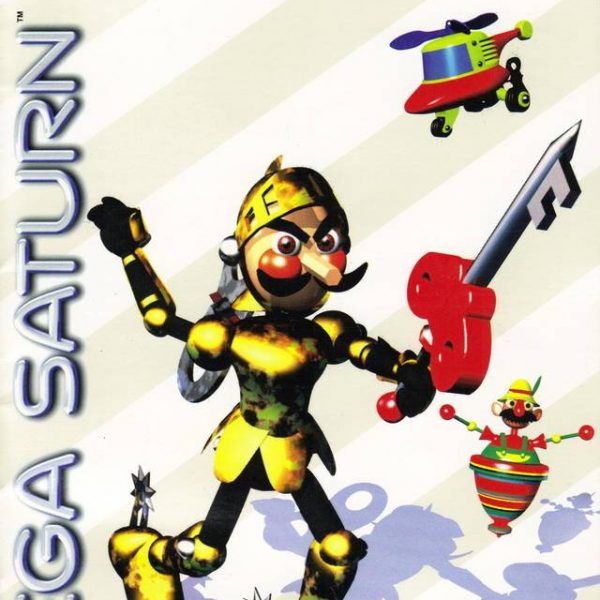 Clockwork Knight is lighthearted and cleverly designed side-scrolling adventure title for the Saturn. One of the console’s few launch titles, Clockwork Knight is an easy game that doesn’t take very long to finish. However, what it lacks in challenge and length, it makes up for in aesthetics and humor. There’s something about Clockwork Knight that will make gamers of all ages and skill types appreciate what it offers. There are much better games of this style out there, but those that have yet to try Clockwork Knight will be pleasantly surprised.

Clockwork Knight takes place in an unnamed household where, at the stroke of midnight, a toy fairy princess named Chelsea sings a song that brings all of the toys in the house to life. During a night that’s as common as any other, the toys are enjoying their brief moments of animation until an unknown creature composed of various parts kidnaps Chelsea and hypnotizes lesser toys to attack others. The Clockwork Knight Sir Pepperouchau takes it upon himself to travel through the house to take it upon himself to rescue Chelsea and set things right. Pepperouchau (Pepper for short) will get some support from other toys, but for the most part, he’s on his own. Fans of a certain Pixar movie will find the most enjoyment from this tale. The thing that surprised me most about it was the ending. Those that finish the game will understand why.

Sir Pepper will need to travel through this house while avoiding pitfalls and battling possessed toys. Each stage has a time limit, but the stages are so short that you won’t need to worry about it. Pepper is more agile than he looks; he can run at a brisk speed and perform some impressive jumps. His weapon of choice is his key. With it, he can perform a thrusting attack against enemies. Tapping the attack button repeatedly allows him to spin on his joints and deal continuous damage. Some foes and objects can be picked up and tossed. His key is also used to unlock passages. Each level is filled with items to find to help Pepper such as extra lives, restorative items, and special coins. In the event that you lose all of your lives, you can spend these coins to continue from the last area instead of starting the game from the beginning. At the end of each stage, you can bet your coins in a mini-game and attempt to win more.

The controls in Clockwork Knight are responsive and easy to learn. For the most part, there is nothing challenging facing Pepper. Enemies can be easily disposed of despite Pepper’s limited range. There are a few areas where the jumping can be a bit tricky, plus some stages have slippery surfaces. Those outliers aside, each stage can be finished without much trouble. Losing a life requires you to start from the beginning of the stage, but it’s easy to get back to where you were. Plus, with every item resetting, there is never any risk of having to start the entire game over. Boss battles in Clockwork Knight are a bit different. They’re not hard, but they have more energy than they should. Only one of them provides a fun battle. For this sort of game, boss battles are usually a highlight.

Even if boss battles are lacking, the boss’ designs are fantastic. In fact, this is a great looking game due to it’s creative use of 2D and 3D. Pepper will encounter a wide variety of heroes, enemies and stages. It’s especially entertaining when you see massive enemies fall apart into tiny, plastic pieces. After finishing a boss, you are treated to a movie sequence that moves the story along. The music is catchy, but after the game ends chances are you’ll forget most of the tracks. This includes the vocal numbers used during the beginning and end of the game. Clockwork Knight’s presentation holds up very well to this day.

Aside from the lackluster boss battles, the biggest problem with Clockwork Knight is the length. Clockwork Knight can be finished in as little as an hour. There are multiple difficulty levels, but the challenge doesn’t add anything new to the adventure. There are no secrets to unlock or other characters to use. However, the ending is still worth seeing because it sets the stage for Clockwork Knight 2. I’m glad I gave this launch title a shot. Not only does it show what the Saturn is capable of displaying, but it helps create new potential for brand new franchise. It has its problems, but this is still a platform adventure title that is worth checking out.

Overall, 6.5/10: Clockwork Knight will be over before you know it, but it’s creative story and presentation help it stand out.