One of the ways I get into the Halloween spirit is through gaming. Around this time of year, I like to try a new game with mystery or horror as its central theme. Last year, I went through The Suffering on the PlayStation 2. This year, I decided to try the game’s sequel. The Suffering: Ties That Bind has the goods to deliver another action packed gore fest. Unfortunately, it suffers (I know, I know) from some of the first game’s problems and introduces new ones. It’s not a bad game, but it’s hard to recommend. Gamers that couldn’t get enough of the first game will be the ones that get the most enjoyment from it.

Ties That Bind’s opening takes place years before leading man Torque arrives on Carnate Island. While serving time in Eastern Baltimore Correctional, Torque and one of his friends get surrounded by members of the Blackmore gang. As the inevitable prison riot ensues, Torque begins seeing visions of his future on Carnate. Then, the game cuts away to the end of The Suffering. Guided by Carmen’s voice, Torque decides to head to his home in Baltimore to discover the truth behind his troubles. Torque winds up at Baltimore Harbor, but is captured by a group of elite soldiers under the command of a woman named Jordan. Held in captivity by her mysterious group known only as The Foundation, Torque’s troubles are beginning. 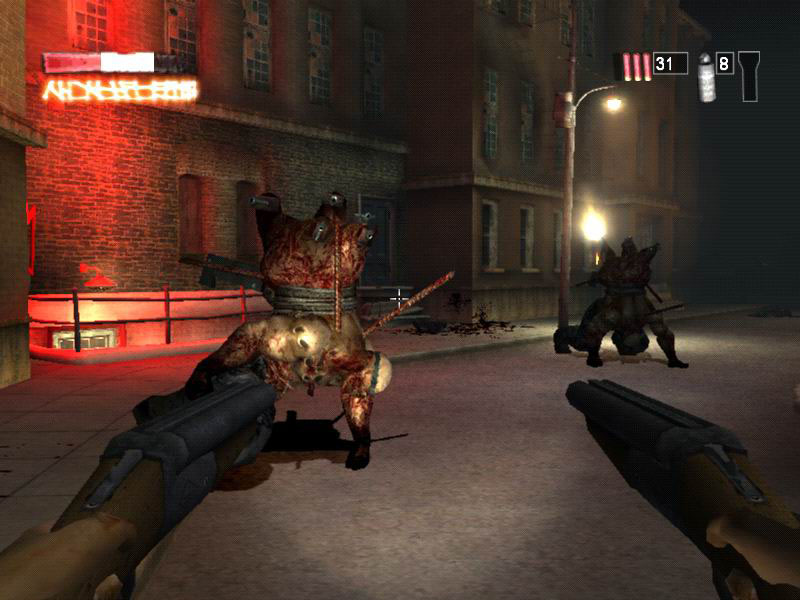 Even with dual, sawed off shotguns, enemies will take a while to go down.

The introduction sequences drop a bunch of new characters on your lap. Torque and his family are still important parts of this story, but it’s these new ones that make the narrative worth seeing through to the end. Jordan is a vicious, ambitious woman. Blackmore is a mysterious, ominous, and dangerous individual that is a constant thorn in Torque’s side. The biggest problem with the game’s story is the ending; if you blink you’ll miss it. In other words, once you finish the last stage, the ending lasts for a few seconds and the credits roll. It would have been nice to have been rewarded better after enduring all of the crap Torque has to go through.

Indeed, Torque goes through some stuff in Ties That Bind. It shouldn’t be any surprise considering all that happened on Carnate Island at Abbott Penitentiary, but now Torque has to navigate the mean streets of Baltimore, Maryland in order to reach the conclusion. Gameplay remained largely unchanged. You control Torque with either a third-person or first-person perspective as he moves from one area to the next. Along the way, he can pick up archive material, memos, and other bits of material that shed some light on the history of Torque’s hometown. The more important materials he’ll pick up are flashlight batteries, guns and ammo. Xombium pills are still scattered throughout, but now Torque will use them automatically. It would have been nice to store them since, more often than not, Torque will need them if he wants to make it out of Baltimore alive.

Ties That Bind is a brutally difficult game. I played on the normal difficulty level and had a tough time. The problem is that the game puts too much at you too quickly. Monsters that move at supersonic speeds, monsters that shoot fire, monsters that shoot fire and electricity, monsters that just shoot…Torque’s one-many army persona can’t hold up against this onslaught of terror. It’s a shame, too. Monsters in the Ties That Bind are as interesting as ever. Some old favorites like the Slayer have returned, but new ones like the Gorger are the true stars. The downside is that it’s hard to appreciate their gruesomeness since you’ll be spending more time trying to stay alive, reloading ammo, messing with Torque’s aiming, and looking for spare pills. Less combat would have been more.

As Torque kills these creatures, his Insanity Meter below his health will increase. Once again, Torque is capable of transforming into a massive, hulking brute of a creature. The creature’s form and skill set changes depending on his morality. Once again, Torque will be offered a series of choices throughout the game that will effect his alignment. When you encounter these moments, two voices will tell you the outcome.

Ties That Bind has the same look as the The Suffering. Everywhere Torque travels, there will be blood, entrails, decay, rust, and more indications of death and destruction. Some environments start to look similar to previous ones, but the game tries its best to keep things fresh as you continue the journey. One area where Ties That Bind truly shines is the sound. I’m not just talking about the eerie shrieks and howls of the enemies, but the voice acting. Rachel Griffiths and Michael Clarke Duncan are two examples that provide their talent to Ties That Bind. Every actor and actress delivers a solid performance and brings Ties That Bind to life. There isn’t anything worth noting on the musical side since, most of the time, there isn’t any music playing. 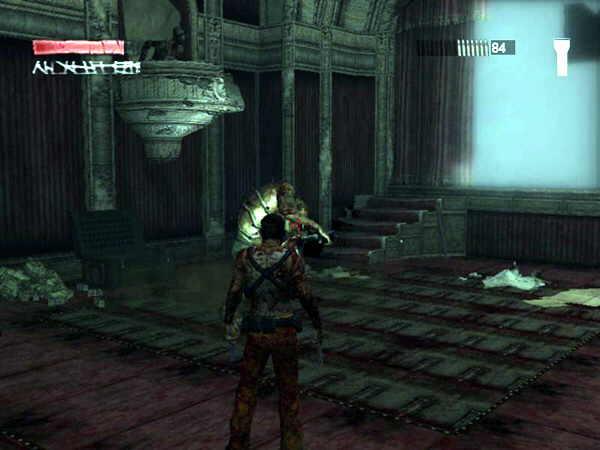 This abandoned theater is one of the game’s more exciting locations.

Thanks to a generous check point system, getting a game over isn’t a total bust in Ties That Bind. Still, it can and will happen no matter which difficulty you select. I had to restart a checkpoint more times than I’d like to admit, but I was still able to finish the game with one of the better endings in about seven hours. The game’s narrative moves at a nice speed, but it’s the combat that will extend the game time. A variety of cheat codes can help make the experience less frustrating, but use them with caution. They tend to cause the game to glitch. It sounds like I’m putting down Ties That Bind, but that’s not my intention. I’m glad I played it. I was just hoping for more in terms of narrative, and less in terms of messy combat. If you enjoyed the first game, then you’ll enjoy this one. Otherwise, taking control of Torque one time should be enough.

Overall, 6.5/10 – The Suffering: Ties That Bind will appeal only to those that couldn’t get enough of its predecessor. If you need some more blood, gore, and exploitation in your life, then you might want to look elsewhere.