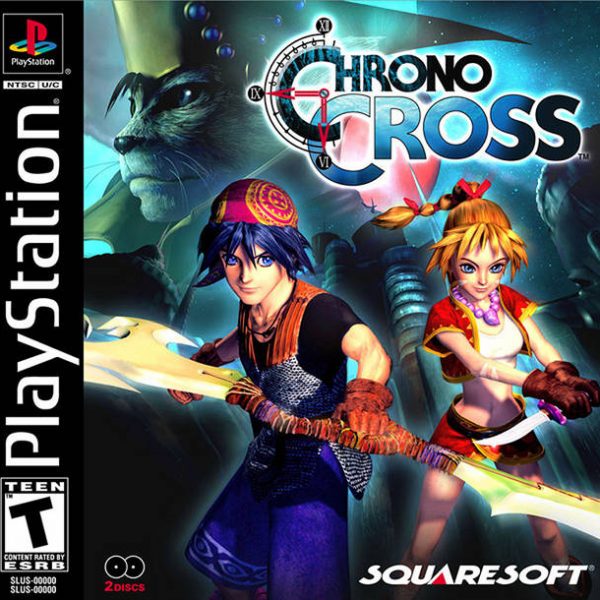 Author’s Note: This review was originally published on April 6th, 2009. Like other reviews of the time, this one features “witty” taglines to separate each section.

Other than a few Final Fantasy titles, I am unable to think of a game that received more hype than Chrono Cross. The funny thing is, the hype was created from good reason. Chrono Trigger was an awesome game, after all. Hearing that Chrono Cross picked up 20 years after the events of Chrono Trigger is enough to make any time-traveler create hype. I, of course, was no different. I did not get relive the magic that was Chrono Trigger from Chrono Cross. Hell, I got something entirely different. It’s not that Chrono Cross was a bad game, it’s just that the hype was all for nothing. It was so different from what was expected and had the game been slapped with a different title, I am willing to be that it would have received more praise. Well, that wasn’t the case.

Good Morning Cro- er Serge!
After a breath-taking FMV introduction, you take the role of Serge and two of his friends in a mysterious dungeon. Luckily, the dungeon was nothing more than a dream as Serge is awakened by his mother. After leaving his village, he ventures to the beach and uncovers a portal that takes him to a parallel universe. The world looks the same, but the people are entirely different. Little does Serge know that he is on a quest for the fate of time and space.

Let me guess. You were hoping for a story where a boy goes to the fair and ends up in the past to look for a girl with blond ponytail. That is far from the case. While the game does take place years after the events of Chrono Trigger, and while the events of the Chrono Trigger receive reference from time to time, Chrono Cross is an entirely different saga. On the one hand, you get a new story in a new setting. On the other hand, you are left with something that could not satiate the Chrono Trigger fans’ hunger for time travel. As an RPG, the story was not bad. Heck, it had some interest twists thrown in, and it had the opportunity for multiple endings and pathways. Unfortunately, Chrono Cross allows you to recruit over 40 characters. Taking a page from the Suikoden book, you end up with plenty of characters with very little development, unlike the seven, fleshed out characters in Chrono Trigger.

Parallel Playing.
The story in Chrono Cross is a bit different than what was expected, but the game’s features are what set the title miles ahead from the predecessor. Chrono Trigger was a classic RPG. You had the menus where you organized your things, the shops where you purchased equipment and items, and a battle system where you leveled up after a certain amount of experience points were acquired. You had the this and that and the other thing. Chrono Cross does away with all of that, which is another reason why it got people upset. Personally, I was fine with the change, although there were times I yearned for the simplicity of Chrono Trigger.

Serge and two other party members travel from location to location on a world map that is similar in design to the one in Chrono Trigger. When you arrive at a destination, you will be in a village or a dungeon. In villages, there are people you can talk to, opportunities to recruit party members, and shops. Weapons and armor are no longer purchased with money alone. Instead, you need raw materials to make them, and then you pay a fee. The new approach is interesting, but often times you will find yourself cursing the fact that you are missing just one raw material to make the next best piece of equipment. The other type of shop allows you to purchase magic. While the characters learn three skills unique to them, there are hundreds of spells you can purchase for them to use as well. I will talk more about the magic system later in the review, but for all and intents and purposes, it is best to consider the magic shops as the locations where you not only get magic, but “healing items” as well. Now, there are key items in this game, but they are used for puzzles. By hitting a button, you will bring up the key items menu. You select your item near the location and see if something happens. Simple, yes?

Finally, we have the menu screen. Besides the typical character management, you have the magic system. Ah, the magic system. The idea is a mixed bag. Personally, I think it tries to look overly complex, when in reality it is needlessly cumbersome for those who love to micromanage. Basically, every character has slots that can hold a magic spell. Slots range in level from one to eight. Each spell has a certain level. Thus, you set a spell in a slot, and you are able to use that spell. Obviously, high level spells cannot be placed in low level slots, but by placing low level spells in high level slots, the spell gets a bonus. Those who love to customize their characters can place magic spells one slot at a time, but for the rest of us, you can hit a button to have an “optimized” spell set placed in the characters’ slots. Because each character is associated with an element (white, black, red, blue, green, and yellow) it is recommended that you place spells associated with their element. The magic system is fun in the sense that you have access to a wide variety of spells, but the bad side of it comes with the system being out of place. Like, why did they do this? Seriously, having each character learn their own spell set would have been fine. The idea is interesting, but the execution ends up becoming rather jumbled.

One Shot Of Magic.
So, you have your weapons, armor, and magic equipped. It is now time to put them to use with the battles. When you run into a foe, you will enter a battle. The best thing about these, boss battles included, is that you have a 100 percent success rate of running away. That aside, the battles are quite different from what was expected. Heck, there aren’t even any experience points in the game. Instead, Chrono Cross uses a system similar to SaGa Frontier in which various stats go up after a battle, little by little. If you beat a boss, you gain a star level. This increase all of your stats. Stars are also used to cast powerful magic.

Instead of the Active-Time Battle system, you have a turn-based system. Your three characters can attack and use magic. However, the attacks are separated by weak, strong, and fierce. Weak attacks deal less damage, but they have higher accuracy. Obviously, fierce attacks hit harder but are less accurate. Each attack takes away a character’s action meter. When that meter is drained, the turn is over. Magic takes away part of the action meter, too. A bit of strategy comes in with the magic system because all magic can only be used once per battle. The fun thing about the meter is that you can maximize damage by going over the limit of the meter. However, this means that character’s turn will arrive later than usual. Another cool mechanic is that you can switch character turns on the fly. For instance, if you are attacking with one person, you can hit the directional button to go to the next person, and then go back to the original to deal high damage.

One thing you will notice about the battles is the elemental field. On the top, left-hand corner, is an oval with three sections. These represent the current elements used. So, if the three sections from left to right are green, black, and red, it means that a black spell, then a red spell, and finally a green spell were used in that order. Thus, the oval fills from right to left. While this field has little relevance in most battles, you can use powerful magic attacks if all three sections are the same color. Speaking of the colors, each character is weak to the opposite color, so it is important to switch characters regularly in order to be safe from powerful magic damage.

As you can see, the battle system is very different than from what it was in Chrono Trigger. While there are still double techs and triple techs available, everything else about the battles is different.

Jealousy Issues.
Despite the differences from the expected outcome, one thing remains the same: Square knows how to produce beautiful graphics. Chrono Cross sports some of the most lush, exotic locations in video game history. There were times I found myself saying, “Damn, I wish I were there right now.” Seriously, beaches, rain forests, mountains, and festive villages spread across the world of Chrono Cross. I’m jealous! I want to live there! Character models, in and out of battle, are just as beautiful. Even in comparison to systems like the PS3 and Xbox 360, the presentation of Chrono Cross is lovely to behold.

Beyond Bag Pipes.
While a few of the tunes in Chrono Cross come from Chrono Trigger, the rest of them are original. Some are good, some are not. The unfortunate thing about the not good tunes is that you will be hearing them often (i.e. the battle themes). Seriously, what is with all of the damn bag pipes? The opening theme, though, was done exceptionally well. In terms of sound, there is no voice acting. The sound effects were spot on.

Chrono Crossing Over.
Chrono Cross will last you about 30 hours. However, there are multiple scenarios, characters, and endings that you will be unable to get in the first run. Thus, this game has plenty of reason to go back for more. Like Chrono Trigger, there is a fabulous New Game Plus option. When everything has been seen, there will be over 100 hours of game time. Chrono Cross was not a bad game, but it was different than what was expected. Those who liked Chrono Trigger may find some redeemable qualities in Chrono Cross. However, there were so many differences that it may turn others away from it. Had Chrono Cross been called something different, it would have been excellent. As a follow up title to Chrono Trigger, it was unable to achieve the level of greatness Chrono Trigger gave us.