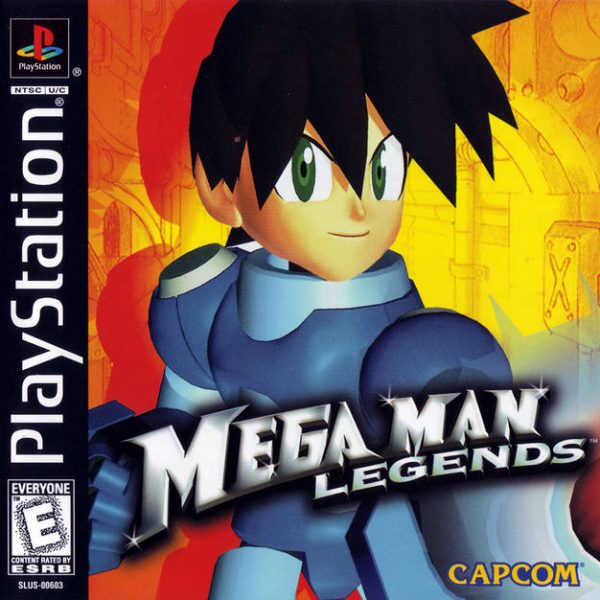 Author’s Note: This review was originally published on February 1st, 2011. This was one of the last reviews where I used the “witty” taglines to separate each section.

Can You Dig It?!
Mega Man Legends takes place in a world where most people make a living as diggers. Diggers are archaeologists that hunt for hidden relics and lost technology. During a dig, Mega Man and his partner Roll end up crashing their ship on Kattelox Island. Instead of continuing with their digs, Mega Man decides to fend off the pirate family, the Bonnes, and hopefully get his ship back up and running.

Mega Man and Roll now have more personality than usual and this adds more depth to the story. While token Mega Man mascots like Rush, Beat or Ike are nowhere to be seen, the new characters you see will make up for that. My favorite happens to be the adorable robo-monkey, Data. The cast of characters in MML is well designed and full of humor that you’d expect in a cartoon. It’s also the debut of the hilarious Tron Bonne. Overall, it may not appeal to some, but it does have it’s charms.

The Dark Dimension.
Mega Man Legends combines the best genres (action, adventure, and RPG) in not the best way. You will control Mega Man and complete missions such as finding a hidden item, fighting a pirate or exploring ruins. It sounds fun, and there are things that make it that way in small increments such as shopping for health upgrades, finding items and weapons to upgrade the Mega Buster, combining materials to make new weapons and uncovering hidden secrets with new abilities. Unfortunately, most of that fun is hampered by the fact that switch to the third dimension has too many flaws. Walking around and moving the camera is awkward. The action happens fast and having a camera incapable of keeping up makes you more likely to get frustrated. The lack of analogue controls doesn’t help, either. Mega Man’s jump is pathetic; so much so that the smallest of ledges will require you to be right up next to it in order to grab on. A lock-on feature slightly helps with fending of multiple foes, but enemies have to be close for it to work properly. Great ideas are in Mega Man Legends, but their execution is in need of adjustment. Like other titles from that era, MML goes to show you that 3D isn’t necessarily the right way to go.

Block Man!
To my knowledge, there is no Block Man in any of the Mega Man titles. Unfortunately, Mega Man Legends would be the one to have him. Actually, most of the characters could be considered progeny of this Block Man. What I’m trying to say is that the graphics are blocky. It’s not blinding, but it could be much better. For some characters, like Tron Bonne’s worker bots, the blocky look is fine. However, the jagged edges and messy modeling of the rest of the cast needs some buffing and polishing. I understand that this is an early Playstation game, but other 3D games got the proper treatment to make them look good. Well, I will admit it’s fun seeing Mega Man without his helmet for a good portion of the game. If anything, it gives him more of a personality.

On the flip side from the visuals, the audio is excellent. The voice acting is perfect for the game; hilarious and comical. The music, despite being scarce, is of the quality you would expect of a Mega Man title.

Legendary Ambitions.
I understand that the time difference between Mega Man Legends and this review is vast. However, I’m capable of playing older games on the Playstation and still give them good scores because of the games being, well, good. I got through plenty of classics. I will continue to play these classics. Mega Man Legends has good intentions and is ambitious, but that’s about all the good I can say for it. The actual game play falls short of being playable, and as any Mega Man fan knows, shoddy game play in a Mega Man is a big no.