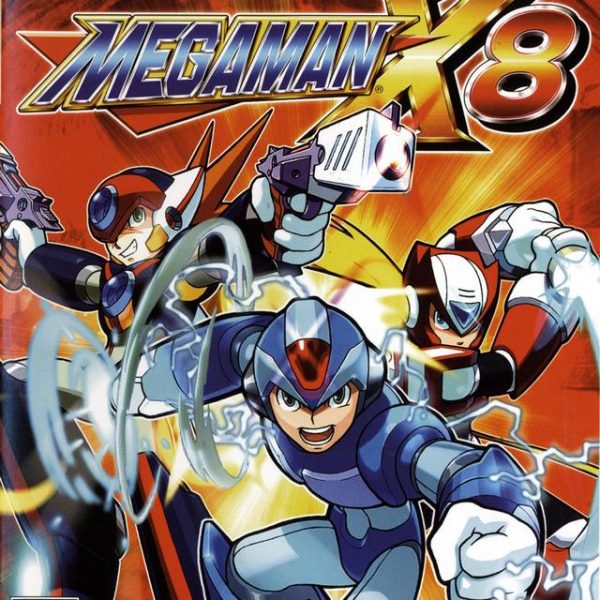 Author’s Note: This review was originally published on December 28th, 2004.

Mega Man X fans who have played as the coolest reploid since his debut on the SNES can finally rejoice. Since Mega Man X5, we have bee hit with lame title after lame title. With the latest Mega Man X8, however, the neo-blue bomber finally gets the justice he deserves.

Story: 7/10
The story revolves around the Jakob Project, a new plan created by the reploid Lumine. Lumine has decided to send new prototype reploids to the moon via a giant rail elevator called the Orbital Elevator. Thanks to the Jakob Project, these prototypes can live freely on the moon without the humans or the Maverik Hunters. However a villain of the past, Vile, has returned and is causing havoc in the area known as Noah’s Park. X, Zero, and Axl are on the scene as they discover that Vile has kidnapped Lumine! Whatever is going on, it can’t be good. The trio have a new mission on their hands.

Like the other Mega Man X games, you have 8 Maveriks to fight until you get to the last boss. Once again, the final boss is Sigma. However this time, you learn more about his past with Zero along with his relation to the Jakob Project. The story, for a a Mega Man X game, is well done. Still, it’ll leave you with more questions about X, Zero, and Axl. I guess that’s why Capcom should make a Mega Man X9! Anyway, there are two new characters in this game: Pallette and Layer. These to gals act as new navigators, along with Alia. With the addition of these two new characters, and the return of the rest of the Mega Man X crew, we’ve got an awesome cast on our hands with Mega Man X8.

Game Play: 10/10
Ah, finally we are back to 2D. That’s right folks, Mega Man X8 plays entirely in 2D with 3D characters and backgrounds. Well, there are two stages in which you drive in vehicles which are in 3D, but those don’t count. You first pick the Maverik you want to fight and then you choose your characters. You can take two at a time. X can shoot a charged blast of energy, and get upgrades from Light Capsules. His new armor is called Neutral Armor. The Neutral armor has two leg, two head, two buster, and two armor upgrades. You can put together any combination you like to make X the ultimate fighting machine. Zero uses his classic Z Sabre and can perform combos. He can also get a bunch of new weapons including a huge hammer, a scythe, and a pair of fans. Zero is the only character who can double jump. Axl wields a variety of guns and has a rapid fire abilitiy. He also can transform into enemies by taking their DNA. He also has a rolling evade skill and a hovering ability. All characters have the air dash skill. I usually pick Zero and X. Fortunatley, Axl has been made ten times more useful in this game, unlike his debut in Mega Man X7. He really packs a punch this time! So anyway, you choose your two characters and then you choose one of three navigators. Alia gives you basic information about the stage and the boss at the end of the level. Pallette tells you about secret routes to hidden items. Layer will help you out with the enemies of the area, such as weaknesses, how they attack, and whether or not Axl can copy their DNA. This adds a bit of replay value to the stages. If you played Mega Man X5, then you are probably like me and hated it when Alia interrupted you every five seconds. If you played Mega Man X7, you probably are like me and hated hearing Alia constantly ask for attention as you were getting hit by enemy fire. In this game, they are much more helpful and much less annoying. Like other Mega Man X titles, there are hidden things all over each stage and you’ll need to use the right team of heroes to get it. In order to get one thing, you may need X and Axl. However, you may have to go back later to the same stage with Zero and Axl to get something else. Despite all the backtracking, it’s really fun. The coolest new feature of the game play are the metals. Metals are triangles of various shapes and colors. You collect them and use them to buy chips. Chips include Life Tanks, upgrades for health and weapons, new abilities. Depending on what mode of difficulty you play, you can find Rare Metals throughout the stages and get new upgrades. These can range from Full Life Tanks to new weapons for Zero. So, you gotta search high and low for these Rare Metals. As you’re searching, your going to be running through some of the most challenging levels ever in a Mega Man X game. Each character has a life bar. You can switch them in and out anytime. Once both life bars run out, you fail the mission and have to start over. If you’re playing on Normal or Hard mode, you get a limited amount of retries. As your blast your foes to bits, you slowly build up a meter. When the meter is full, you can perform a double attack. This is a great skill to use against the bosses. Speaking of bosses, each one has an interesting story to tell, depending on who you face him with. What Optic Sunflower says to Zero is completely different from what he says to X. This adds more replay value. Like the other Mega Man titles, the Maveriks all have a specific weakness. Once the Maverik is gone, X gets a new ability, Axl gets a new gun pertaining to the Maverik’s power (so Burn Rooster nets Axl a flame thrower), and Zero learns a new sword technique. The classic good stuff is back with some awesome new stuff. The game play of the latest and greatest X game is stellar.

Graphics: 8/10
Another thing that Capcom finally brought back were more anime cut scenes. The characters look great with cel-shaded animation. Next, the characters during the actual gaming look good, but not great. I don’t think anything will ever compare to their greatness back on the SNES or the PS1. Still, they are better than before from X7. Next, we have the backgrounds. They really look awesome. The detail to each stage was done very well. Finally, during the in-game conversations, you get to anime pic shots of each character as they speak (like in LUNAR and Saiyuki). The characters don’t look as great as they have before, but the overall graphics are great.

Music and Sound: 5/10
Sadly, the music this time around isn’t memorable as it has been in other X games. While the music is good, it’s not the calibur of other titles. Music is a very important factor in any Mega Man game (X or not) and this title is unfortunately lacking in this area.

The sounds are good, though. The voices aren’t so bad that they’ll make your ears bleed like they did in Mega Man X7. Also, Axl doesn’t sound like a stupid little kid anymore. While Capcom improved the sounds, the music was left behind.

Replay Value: 10/10
Since I started playing Mega Man X, I remember that I beat the game every day. Like the other Mega Man X titles, you’ll always be coming back for more. Not just because of the Rare Metlas you missed or to get a new ending (three endings to view), but because it’s a fun game. While one game is short, you’ll be playing it over and over to clock in the hours for this title.

Buy or Rent: Rent
Now personally, I would buy this game because I love Mega Man X stuff and this would be another thing to add to the collection. However, most people should rent it because it is a short game. One rental period is more than enough to beat it once, or tin some cases twice.

Mad props go to Capcom for getting it right this time around. Let’s hope that if they make a Mega Man X9 that they keep this classic stuff and improve on some factors to make the ultimate Mega Man X eXperience!