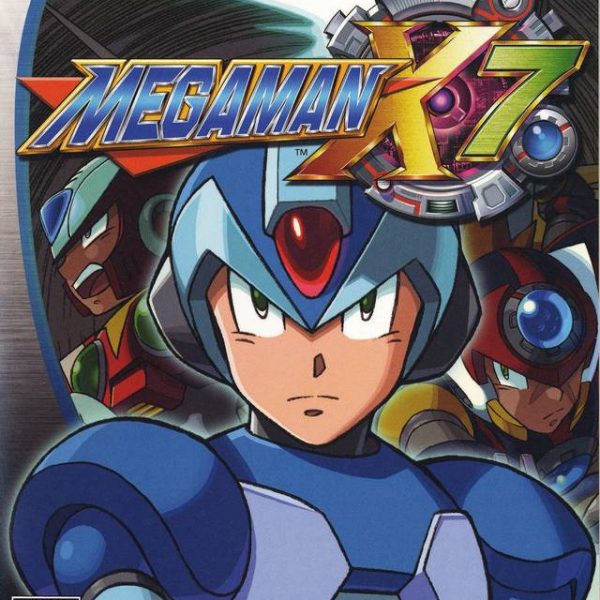 Author’s Note: This review was originally published on October 18th, 2003.

The seventh addition to the Mega Man X series has arrived for the PS2. Despite all of the new changes, it still is a pretty fun game once you get used to it. There are tons of flaws though…

Story: 5/10
Mega Man X, a mighty hunter has strived for world peace since he came to be. However, he has fought too much and decided to put his gun to rest and look for a better way to achieve peace. Since X left, a new group appeared called Red Alert. One of the Red Alert members, Axl, despises the methods used by Red Alert and escapes. He meets up with the mighty Zero, and hopes to stop the evil coorperation.

That’s the beginning of the story. You’ll learn more about it as you complete the stages. What I don’t like is that the story revolves around Axl and Zero…NOT MEGA MAN X!! I mean…what the hell?! He’s the person who we all know and love! And of course, Sigma is back. Seriously, a new bad guy would be cool every now and then. Oh, and I really don’t like Axl. He has some cool moves, and can assimilate the form of certain enemies, but I don’t like him that much. Zero and X are just as kick ass as ever, and the new villain, Red, is very cool as well.

Gameplay: 7/10
This has got to be the toughest Mega Man game yet, and I like it. The controls are really difficult at first, but once you get used to them you’ll have an easier time. Each character (X, Zero, and Axl) has their own set of special skills. Axl can hover, Zero can double jump, X gets new parts…fun little things like that. You pick two characters for a stage, giving you plenty of options. You can effortlessly switch characters with just the push of a button, making boss battles a bit simpler (if that’s possible!). As you finish of Mavericks, you get new powerups. Zero, once again, gets new moves for his sword. New to the game is that Zero also gets a spear, daggers, and other nifty power ups. In each difficult stage you’ll find Reploids asking for help. Save them, and you may get an energy chip. These chips are used to customize your two characters that you selected for that stage. You can increase their speed, power, or the effectiveness of recovery items. Their is a lot of customization, so saving Reploids is very important. X still finds capsules from Dr. Light, there are heart tanks in every stage, and energy tanks are available in certain stages as well.

There is a lot of bad things in the game play, however. First, sometimes the view will switch to 3D. This is fine, but usually you can’t rotate the camera. It makes going around the corner very frustrating. Also, if one of the Reploids you’re trying to save gets killed…it’s gone forever. This wouldn’t be so bad if you knew who gave you a chip and who didn’t. X isn’t an playable character until you complete a certain number of stages. This means that he’ll miss out on heart tanks and upgrades from the chips. A lot of the levels are insanely difficult. The power ups for X are insanely obvious, getting rid of the challenge of looking for them. Overall, the game play needs a lot of tweaking to get back to the old fashioned Mega Man playing style that is familiar. Although Capcom did try some new things, it will take a while to get used to.

Graphics: 9/10
The cel-shading works in this game. Usually I’m not a fan of it, but I feel it fits pretty nicely. The character models are nicely done. The environments are also great. I wish that there were more enemies, however. It gets boring seeing the same thing in every level. Still, the cel-shading works for MMX7.

Music and Sound: 6/10
The music, as usual, rocks the house. The upbeat, techno and rock music is fitting for every stage. You’ll definitely fee like cranking up the volume…or at least you would if it weren’t for…

THE TERRIBLE SOUND! Oh my god…the voice acting in the cut scenes is done so bad…ugh! You can change to Japanese voices, but you’re stuck with the American acting in the stages. Not only does each boss have an annoying battle cry and voice (Flame Hyenard = the most annoying thing I’ve ever heard), but the heroes you select lack emotion. I miss X and his high squeaky voice, like he was meant to have! And Zero sounds like a 40 year old man! Axl has a little kids voice, while he is actually a teenager. But the worst…is Alia…and her messages. Like in X6, you can choose whether or not to listen to Alia. This time, Alia has a voice. She talks…and talks…and when you’re trying to kill something or rescue a Reploid, it just makes so annoying. And you CAN’T turn her off. Capcom really messed up on this part of the game. Too bad, because the music was great.

Replay Value: 10/10
It’s Mega Man, so you’ll be playing many times. With the customization options, the high challenge, and the fact that Mega Man is fun…you’ll play this game for a long time.

Difficulty: Hard
Yup, this is one tough cookie. The new game play styles coupled with the boss and level difficulty add up to one hard game. But after you complete it, you’ll feel very proud of yourself! Unlike other very hard action games (Shinobi for the PS2), this game is NOT impossible.

Buy or Rent: Rent
Personally, I’ll be playing this for a while so I bought it. But if you just want to beat it, then give it a rental. I’m confident that it can be beaten in a day or two, despite the difficulty level.

Mega Man X7 does have flaws, but it still has some of that blue bomber feeling. If only X were more important in this game, then I’d be a bit happier but whatever. If they make a Mega Man X8, they should learn from some of the mistakes they made.