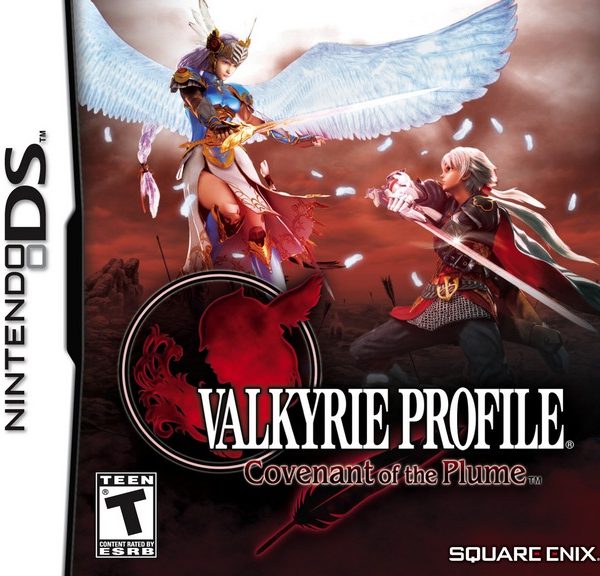 Author’s Note: This review was originally published on May 9th, 2009. This was written during a time I used “witty” taglines to separate the review’s various sections. Hopefully this review will remind you to always seek a second opinion.

The next entry in the Valkyrie Profile series received very mixed reviews. Negative reviews sprang from the big time websites and magazines, whereas glowing reviews sprang from people on message boards. Trusting the latter group, I picked up Valkyrie Profile: Covenant of the Plume and played it from start to finish multiple times. Those who like the series, or those who like strategy games with plenty of challenge should look into this dark, tragic, and fun adventure.

Tragedy and Strategy.
Unlike Valkyrie Profile and Valkyrie Profile: Silmeria, Covenant of the Plume is a strategy game surrounding a human named Wylfred. Living the life of a mercenary with his best friend Ancel, Wylfred hopes to battle enough in order to exact revenge upon Lenneth. After his father became one of Lenneth’s einherijar, Wylfred’s young life spiraled out of control: his younger sister died of hunger, and his mother became insane. Now, Wylfred will do anything to get back at the goddess.

Unfortunately, Wylfred’s life as a mercenary is short lived after he is killed by a monster. However, the mistress of the underworld, Hel, hears his final cries and offers him a second chance of life. With a price, of course. Wylfred is granted the Destiny Plume. By invoking the plume’s powers, he will gain powerful abilities capable of ending the life of any being, but to do so he must forfeit the lives of those he holds dear to him.

Covenant of the Plume has a great story, and was treated with excellent story writing. The language is reminiscint of the lingo used in the dark ages. The best thing is that there are multiple pathways and characters to try. Thus, there are multiple endings. While this may come as a downer at first, you will soon overlook this because the game lasts only 8 to 10 hours. The factor that determines your ending is how often you use the plume. Regardless of the path you take and the ending you witness, a fun, bleak tale awaits you.

Adventure And Accouterments.
While Covenant of the Plume is an SRPG, other things about the game remain true to the Valkyrie Profile nature. The world map is explored by pointing and clicking to your desired destination. The menus allow you to view your characters and customize them. Ah, the fun that is to be had with this. First, your characters can equip a variety of weapons and armor. Each weapon has a number attacks, with three being the most. You can alter the order of the attacks for your characters depending on your playing style. You can also teach your characters special skills and abilities through the use of books. Obviously, there is plenty of customization, and I love games that give me that option. Outfitting my favorite characters with the best equipment was always fun. Unfortunately, the equipment available in shops is usually crappy when compared to the rewards you get from battle. It is not until the later chapters when you start getting equipment that is actually useful.

Besides the customization, you can go to the tavern to hear rumors. Often times, these rumors will unlock bonus battles. Other times, they will keep you updated with the exciting events happening in the world. After you are done with the shops and taverns, you can finally set off to battle.

Win That Sin!
Unless you use that vile plume (Pokemon reference? Yes, yes I did.) battles in Covenant of the Plume are difficult. Bottom line. Point blank. Period. Your party consist of only four people, and you are usually facing up to eight enemies. Also, you need to fulfill a sin requirement every battle. To do this you have to do one of two things. The first is to overkill your enemies, or you can sacrifice a comrade. If you do not fulfill your sin requirement, your next battle will be exponentially more difficult. If you barely make the minimum, you get crappy rewards. The only way to get the best equipment is to go above and beyond the amount of sin needed. Future battles without said rewards are very, very difficult.

So, what do you do? Well, first off, let me explain how battles work. Like any strategy game, you have your characters that move on an isometric grid. There is an ally phase and then an enemy phase. When one of the sides is no longer standing, the battle ends. Your characters can do the basic things found in strategy games. You can move, use AP to activate abilities or items, or attack an enemy if you are in range.

Still, with all of these abilities and tactics available to you, even the most seasoned SRPG veteran will have trouble without the aid of the plume. If you want that best ending, you mustn’t touch that plume, which ultimately makes the game insanely difficult. Sure, anything is possible, but don’t say I didn’t warn you. However, remember what I said about the game being short? Not only is it short, but all of your abilities and items carry through on successive plays. Thus, you can begin new games with awesome weapons.

You can also begin a game anew with Wylfred’s special and awesome abilities. When you decide to sacrifice a character with the plume, fun things happen. The character who gets “plumed” becomes insanely powerful. Thus, you can easily over kill all enemies with that character’s attacks alone. Furthermore, this will earn Wylfred a new ability. These amazing skills can cause paralysis to all enemies, freeze all monster enemies, half the HP of all enemies, and so much more. Once the battle ends, the character who got “plumed” is gone forever. Thus, the usual method of playing the game consists of using the plume multiple times on initial playthroughs, and then not using it all when Wylfred has an arsenal of devastating skills. By witnessing all of the endings, you can unlock the bonus dungeon, giving Covenant of the Plume excellent replay value. While the battles seem difficult at first, it is because Tri-Ace wanted players to experiment with the plume. Since you can skip story events, playing the game multiple times is a breeze.

Back to Beautiful Basics.
While Valkyrie Profile: Silmeria had 3D models, Covenant of the Plume returns to the 2D world with vividly drawn sprites and gorgeous character portraits. There are also excellent cutscenes that help advance the story, and also show off the true power of the DS. Special attacks, towns, battle fields, and everything else about the presentation of the game is gorgeous. The game’s sound track will tickle original fans of the first Valkyrie Profile with delight due to the fact that most of the songs are from the first game. While there were a few original tracks, hearing some of Motoi Sakuraba’s best work remixed for the DS, was an excellent choice.

Making Room For The Plume.
Seeing all that Valkyrie Profile: Covenant of the Plume has to offer will take you about 30 hours. As I have said, it is expected that you will play through the game multiple times. When you finally see it all, you will still come back for more because like the other Valkyrie Profiles, this game is addictive. It may seem overwhelming at first, but using the plume the proper way will yield excellent results. If you are looking for an excellent game and don’t mind grueling difficulty, check out Covenant of the Plume. Now, it is once again time to worship Freya. Even on a portable screen, that goddess still has it going on!