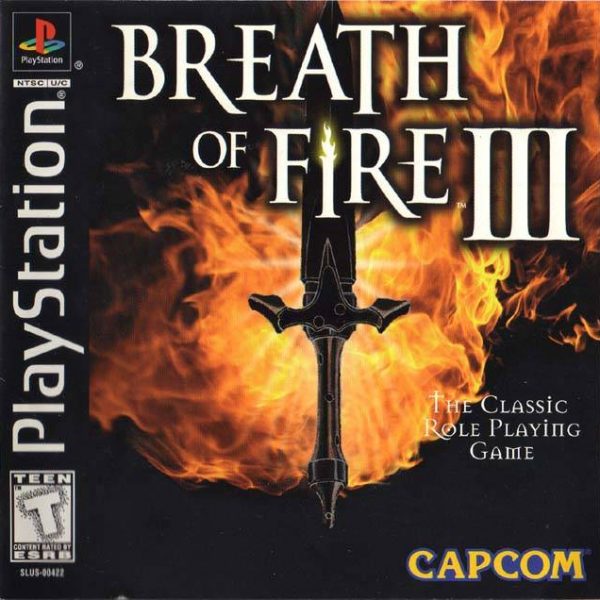 Author’s Note: This review was originally published on May 9th, 2006. This was written years before I started using “witty” taglines for each section, but they (sort of) appear in this review. I remember wanting to give some overdue praise to one of my favorite games of all time instead of studying for finals.

Opening Opinions of Optimism:
I figure that it’s time I pay my respects to the favorite game in my first played RPG series, ever. While I was upset to learn that Breath of Fire III was going to be for the PS1 and not the SNES, receiving both as a gift made me happy. The Breath of Fire series has always been about classic, role-playing game-play while adding new elements to the series and genre. Breath of Fire III continues this tradition, and does so beautifully. There are a few flaws, but overall the game was one of the most enjoyable RPGs ever.

Brilliantly Basic Battles!
The main reason why I enjoyed the game so much was because of the battle system. Most people are probably confused as heck when they ponder why I enjoyed the battles because the random encounters were too frequent in some areas, some of the enemies weren’t balanced, and the system used a very back-to-basics turn based style. It’s hard to say why I liked it so much, but I did. Dare I say it had a certain charm to it? Anyways, you can tell when you get into a battle because an ! will appear over your character’s heads. If it appears over all three members of your party, then you most likely surprised the enemy. However, if you get into a battle without an ! appearing, the enemy most likely caught you by surprise. Your characters can attack, use magic, use items, defend, run away, etc. One cool thing is that you can do is examine enemies. Doing this allows you to learn enemy skills, some of which are very potent. This also allows people like Momo, who mainly use healing magic, to earn some attack spells. Once again, there are dragon transformations for Ryu. In this game, you find Genes. There are elemental Genes, as well as Genes that grant you certain skills. You have to find most of them, but some are giving to you as part of the story. Mixing and matching Gene combinations was very fun, and added a bit of strategy to the game’s battles. This is especially true during some of the more difficult boss battles. Unlike the previous (and disastrous) BoF, you are in the dragon transformation state until you run out of MP. Ryu loses a certain number of MP with every turn. The battle ends when all enemies are defeated, and unfortunately you share experience points so it takes a bit longer to level up. Despite this, the battles were fun, at least for me.

Semi-Stellar Story and a Cool Character Cast!
The game begins in a mine in which two diggers find a crystal containing a dragon whelp. After the crystal shatters, they attack the dragon. This is when you start playing, for the dragon is you. Eventually, you end up down a cliff and are found in human form by a cat-man named Rei. The boys name is Ryu, and he has forgotten his memory. Rei and his friend Teepo are free-lance bandits, and now Ryu has joined the team. Together, they will take on any job the town gives to them, while at the same time hoping to uncover where Ryu came from.

The plot takes a few twists here and there, and some of them are interesting. For the most part, the story is nothing really ground-breaking. While the story is average at best, the characters are what really make the game a winner. There is the return of another Ryu and another Nina, as well as a bunch of other new characters. In fact, there is a cameo appearance by a certain blue-haired lady that was in the first two BoFs. Unfortunately, you only get six party characters for battle, but since they change over the course of the game I did not care too much about this.

Walking and Whacking Wherever!
When you aren’t battling the baddies, there are many things to do. The world map of BoFIII consists of various areas. There are no random encounters on here, however there will be times when an ! appears over Ryu’s head. This means that you can go into an area that holds treasure and monsters. This is a great way to build up experience. Another thing you can do is shop around the towns and talk to the townsfolk. What’s even more fun, however, is using the action button against them. In BoFIII, you can switch who is the lead character when walking around. Most of them have certain actions that they do that are used to solve puzzles, such as kicking boulders, slashing ropes, and firing bullets. If you use these on the townspeople, not only do they look at you funny, but they sometimes drop money! It’s both amusing and rewarding. Speaking of rewards, this game introduces players to the Master system. There are various masters in this game in which you can become an apprentice. They affect certain stats every time you level up. If you level up enough and talk to your master, they will teach you a new skill. These type of skills are similar to the ones that are used by the monsters that are learned through examination. Both types can be shared with other members of the party through the use of Skill Ink. There are various masters in the world of BoFIII, and being able to study under some of them requires a bit of work. Still, in the end, they are well worth the investment. Besides the Master system, there are a plethora of mini-games for you to play. Fishing has returned, and this time is much better. There is also a Faerie World in which you can build an entire community similar to that of BoFII, only this time with faeries. The Faerie World is by far the most rewarding mini-game in the game and well worth the invested time. The new areas in which you walk around, that aren’t enemy infested, always have something for you to do before advancing the story and that is very important in any RPG.

Pointless Puzzles in Dangerous Dungeons!
The areas with the enemies usually are a bit on the long side. Since there is no exit spell in this game, it can get quite frustrating backtracking through a long dungeon after a difficult boss battle. While getting back is not as bad as it could usually be, getting to the boss can get annoying because of the puzzles. RPGs and puzzles typically go hand-in-hand, but the puzzles in BoFIII are some of the most annoying ever seen. In some cases, the directions are vague. In other cases, the puzzles take too long and ask too much of you. The Desert of Death is probably one of the worst things to ever exist in RPG history. Other than these annoying puzzles, the dungeons are the usual things you’d expect in any RPG you’d play. Once they are completed, there is rarely any reason to go back unless you need to train or obtain a treasure you missed.

Gorgeous Graphics Galore!
The world of BoFIII is indeed a beautiful one. There were so many colors used, it really appeals to the eyes. First, the characters. Each character was uniquely drawn and has a very distinct look to them. Their character portraits appear in the menu screen, and some characters change their appearance over the course of the game. The same change applies to the character sprites, which you will be seeing most of the time. These were done very well, in fact the NPC’s look great, too. The same can be said about the imaginative monsters. While many of the designs are used many times throughout the game with different color schemes, the bosses are truly unique and…well… down right cool in some cases. The dragons that Ryu transforms into are the same way, and just wait until you see some of his more powerful forms. Magic effects are dazzling, special effects are vivid, and everything else about the character graphics was done well. The same can be said about the backgrounds. While a little boring at times, such as in the desert or in a long dungeon, they were well made for the most part. The graphics were done well overall in BoFIII.

Speech Sounds Super!
Now, when I first started a battle and heard the characters shout when they attacked or say the name of the magic spell being cast in Japanese, I was shocked. This was something new to me. To this day, I still love it. While the voice acting is minimal, it was done very well. The other sounds in this game are just as spot on.

Musical Masterpiece? Mainly Mundane…
The OST in BoFIII is nothing really to write home about. While some of the tracks were well written, for the most part they are forgettable. While it has been a while since I played the game, if the OST is good you can remember a song no matter how long ago you have played it. The music is average at best.

Final Feelings:
If you see this game at a video game store, buy it. It’s a great old-school quest that will definitely take you down a great trip to memory lane. Not only that, but there is a bit of replay value due to some foreshadowing. The game did not take all that long, I’d say about 30 hours to finish and that is including side quests. If you want to find all the masters and Genes, then you may have a bit of a longer play time on your hands. Either way, it’s a game worth owning. Breath of Fire III was a game that not only was fun, but every time thinking about it I think of the good memories. That, my friend, is what a good game is all about.