Soul of the Samurai takes place during a period in history I find fascinating: the era of feudalism in Japan. Before the westernization and the Meiji age, Japan was filled with dojos, samurai, spies, shogun, and all other sorts of wonderment. At the start of the game, you can choose to follow either Kotaro Hiba or Rin. Kotaro is a ronin that has returned from a sojourn to visit the grave of his parents. Rin is a ninja searching for her missing brother that went missing while protecting a large sum of gold. Both have arrived in the small village of Matsuna. Unfortunately, the village is far from welcoming. The authorities will attack anyone onsite. Villagers are complaining of bizarre headaches. Something is going on. Kotaro and Rin need to get to the bottom of it. The story is predictable and short, but it makes up for these issues with heart. You’ll feel for Rin and her struggles, and you’ll cheer for Kotaro as he goes from apathetic ronin to heroic savior. Both the heroes and villains would have benefited from more narrative, but for what little there is, it’s a fun ride.

A ronin and a ninja walk into a bar…

No matter which character you pick, the formula for the adventure remains the same. You will be given an objective and need to fight your way through enemies to reach it. Before the objective can be totally fulfilled, you will fight a boss. Navigating through the village and its surrounding areas is easy thanks to its pre-rendered style and, more notably, it’s lack of tank-like controls. At first glance, anyone that looks at Soul of the Samurai will hypothesize that it’s another early 3D action game that doesn’t handle well. In Soul of the Samurai, both Kotaro and Rin more relatively easily. Their walking speeds are slow, but by holding a button you can have them run. Pushing the triangle buttons causes them to draw their weapons. Using the circle button will use an equipped item. The X button is used to jump, and the square button is used to examine, talk, and (most importantly) attack.

Combat is where the gameplay is more varied due to Kotaro’s and Rin’s playstyles. Both characters can guard, perform a riposte, and make quick lunges when their weapons are drawn. Both characters can acquire new moves by defeating enemies and earning “experience points.” Both characters can equip a variety of weapons. The catch is that it becomes pretty clear from the start that more finesse is needed when playing as Kotaro. Kotaro uses traditional samurai blades. His starting abilities include a three-hit combo and a thrust. The problem with his move-set is that it’s slow; his moves require meticulous button pressing and spacing. While he hits harder than Rin, it’s clear from the start that Rin is the more effective character. Not only does Rin strike quicker and longer with her starting move-set, but she has access to shuriken, exploding shuriken, and more long-range weapons that will knock even the toughest boss monsters on their asses. Don’t misunderstand: both characters are fun to play. But, if you’re planning on only playing through the game once, then you should play as Rin.

I don’t recommend playing it once, of course. To get the true ending, you need to go through the game as both Kotaro and Rin. Truthfully, there will be some growing pains no matter on who you start with. Soul of the Samurai is a difficult game. There are tough enemies, tougher bosses, limited healing supplies, and some finicky moments with the camera. I saw the game over screen an embarrassing number of times, but it didn’t take long for me to figure out how to adjust my play style and carry on. Other than one area near the end of Kotaro’s campaign, I never felt the game was unfair with its difficulty. Save points come at just the right time, and there was never a moment I was without healing supplies. 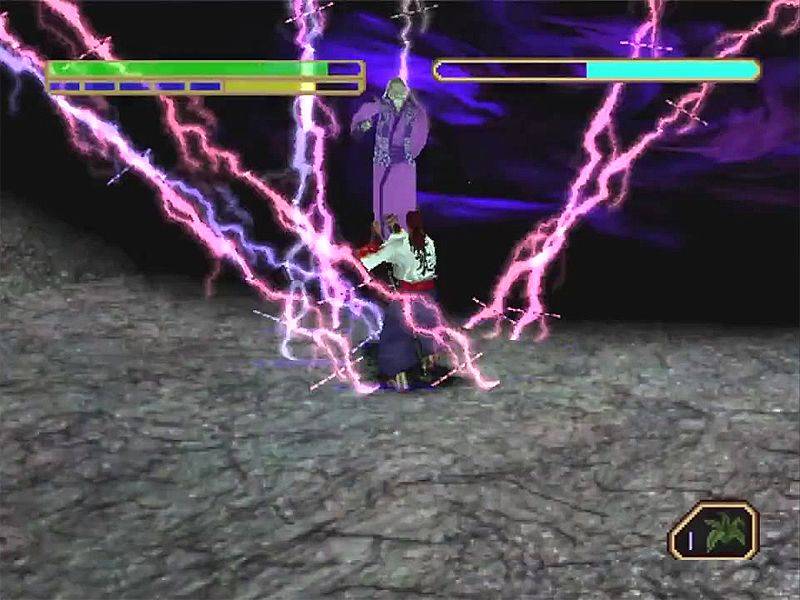 Speaking of save points, I have to praise the way the game handles saving. Whenever you save, the game will compose a haiku depending on where you are in the story. It’s a clever feature that adds to the overall presentation. The rest of the game looks like something you’d expect from 1999. It was an era of jagged 3D models and pre-rendered graphics. Surprisingly, Soul of the Samurai still looks decent. Rin, Kotaro, their enemies, and the environments look and move better than expected. At the start and end of the game, there are some gloriously campy movies that attempt to show the power of the PlayStation. If you just want to blaze through the game, you can press the Select button to skip all story sequences. As expected, Soul of the Samurai’s soundtrack is filled to the top with classic, Japanese-styled music with just enough modernity to remind you that you’re playing a video game. If you want a more survival-horror themed adventure, you can turn off the music. Aside from a few moans and groans, there isn’t much to the game in the way of voice acting. But, it’s not an issue.

My biggest problem with Soul of the Samurai is that it’s short. After four hours, I finished the game with both characters and acquired the true ending. It was a great way to kill some time, but I wanted more. I’ll play it again, of course. Despite its rough edges, this is a game with a lot of heart and (pardon the word choice) soul. Fans of games like Onimusha, Nioh, and/or Tenchu that feel like they’ve drained all of their resources should give Soul of the Samurai a glance. If anything, it’ll remind you when Konami used to care about the quality of their products.

Overall, 7.5/10 – Soul of the Samurai is a fun title that will provide you with a brief but exciting visit to feudal Japan.