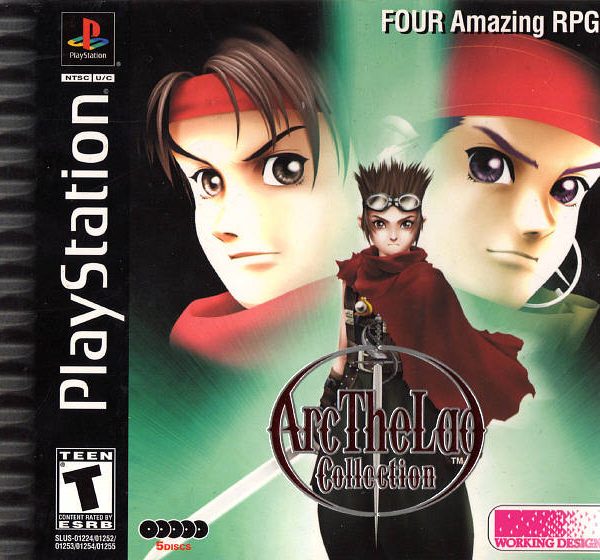 Author’s Note: This review was originally published on August 6th, 2003. It’s filled with typos and ridiculous language. This review has so much cringe you can cut it with a knife.

After I played Arc the Lad: Twilight of the Spirits, I wanted more Arc. So I stole someone\’s Arc the Lad Collection and despite the graphic and music changes, the collection is really great!

Story: 10/10
There are three games in this collection, each one different. It should be noted that I\’ve played only the first couple of hours of each game.

Arc the Lad: Arc is a young boy whose father has gone missing ten years ago. Arc sets off on a quest to find his father\’s whereabouts, he ends up seeing that the Holy Ark has been broken. Arc is no match for the monsters released, but gets rejuvenated by a spirit. His adventure then begins in resuscitating the Ark and (as usual) saving the world.

Arc the Lad II: The hero of this game is Elk, a member of a tribe who manipulates flame. He and his partner Cougar are hunters who hunt for money. After a bizarre encounter on a ship with a young girl, Elk gets ready for the adventure of a life-time.

Arc the Lad III: The final game in the collection focuses around Alec. Together with his best friend Lutz, he sets out to rid his town by a bandit invasion by hiring a hunter. After the hunter beats the bandits, Alec and Lutz set off to make the world a better place by becoming hunters.

So there are three stories that focus around one giant setting. My only complaint is that Arc I is too short, and Arc II is too long (or so I\’ve heard). Still, three stories in one collection is awesome!

Gameplay: 9/10
The menus can be frustrating at times in each game because you get so many characters to manage. But some of you may like this. Other than that, RPGers will feel right at home. You can walk around the towns, talk to various people and go shopping. I really liked it. In each game, you can also catch monsters and use them in battle.

Battles: 10/10
Arc the Lad uses a Tactical RPG battle system. But unlike most strategic games, you can move around freely on your battle range grid. If you\’re next to an enemy, you can attack by pressing X. Like any good RPG, some characters are stronger attackers than others. Magic and items require the use of a menu (like in all strategic RPGs). The battles go MUCH faster than they usually do in most Tactical RPGs. There are tons of spells to learn, and they get stronger as you progress in the game. The battles are a lot of fun, and each game has an improvement in each system.

Characters: 10/10
Working Designs helped produce this game, so you know that the characters are going to be wonderful. And in each game, they are! There are unique characters in each game, and some make cameos in the later installments! Plus, each one has their own personality, way of speech, weapons, armor…the works.

Graphics: 9/10
After playing too much Twilight of the Spirits, you sort of have to get used to the cute 2D sprites. Arc I has cute 2D sprites, and the backgrounds are nicely detailed. Arc the Lad II uses the same sprite and background type of design. This time, they\’re much more crisp. In Arc the Lad III, the sprites look more realistic. It is also the first Arc to go into 3D. Overall, I\’m satisfied with the graphics.

Music and Sound: 8/10
The tracks can repetitive, although they are fitting. The main theme is what sticks out above the rest; very enjoyable.

The voices are all in Japanese, something I wished they did for the PS2 Arc. The slashes and zaps are all on target and sound great.

Replay Value: 10/10
With three games, you\’ll be playing the collection for a long time. Arc the Lad II has a HUGE battle arena, and Arc the Lad III has a ton of jobs for you to do.

Difficulty: Medium
You\’ll have to level up many times if you want to beat each game, but most of the time the battles aren\’t too bad. Some of the side quests can be quite tough.

Buy or Rent: Buy
Buy this! Not only is it too long to finish in about 8 rentals, but you\’ll just be a satisfied customer owning this fine piece of video game. If you find it new, you\’ll have lots of little goodies installed in the box.

With three games, great characters, and fun battles Arc the Lad Collection is something you won\’t want to miss. Be sure to look for it and buy it.