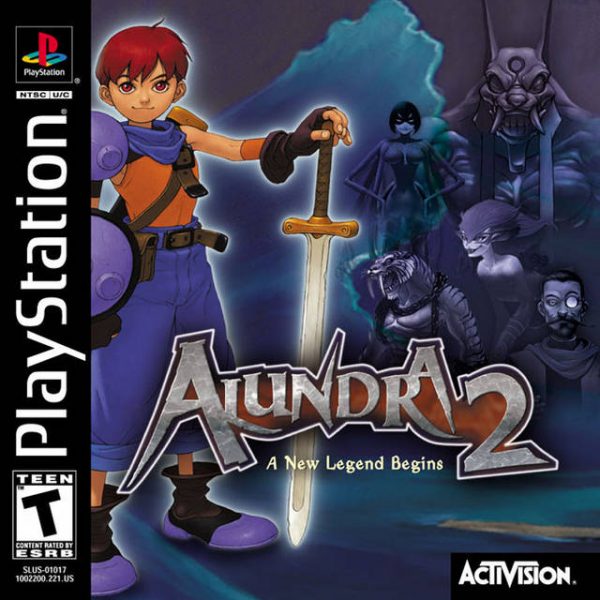 Author’s Note: This review was originally published on May 29th, 2009. Like other reviews around the time, it features “witty” taglines for each section.

Most gamers who have played Alundra 2 frown upon it. The biggest reason is because it is nothing like the original Alundra. Obviously, people were hoping for a repeat of the early Playstation game and ended up with the obverse. Well, Alundra 2 is not that bad, but it could have been much, much better.

The Return of Alun—wait…
Alundra 2 is the story of a pirate hunter named Flint. After a mishap on an airship, he ends up meeting Princess Alexia. The strong-willed princess hopes that Flint can restore her kingdom to its former glory. Pirates are increasing daily and it is up to Flint to to do all he can to make things right again.

With plenty of humor, not a hint of of dream adventuring, and, well, pirates, Alundra 2’s story is unlike anything from the first game. This is one reason why people frowned upon it bearing the same name as the predecessor; it was not a sequel at all. Still, on its own, the story is entertaining with some of its witty humor and pop culture references, despite the fact that it lasts for only a few hours.

The Dark Side.
The thing I loathe about various PSX games is that they go ape-**** about having 3D presentation. Alundra 2 is no different. See, I’m always going to prefer 2D to 3D, and this was my biggest gripe about the changes from Alundra to Alundra 2. The graphics in the first Alundra were beautiful, lush, and detailed sprites! Alundra 2 has characters that look like they came from the world of Final Fantasy VII, which I found to be rather ugly. While the areas you explore are half-way decent, they are not enough to make up for ugly character models.

Cartoon Cacophony
For a Playstation game, Alundra 2 has decent voice acting, nearly on the level of Valkyrie Profile or…umm…or…something else. Like the story, the characters’ voices use humor and silliness to get their points across, similar to what you’d expect from your favorite cartoon. In the music department, the game doesn’t shine as well as other PSX titles, but there were still a few catchy tracks here or there that gave the game a bit more flavor.

In A Clunky Funk
Truth be told, Alundra 2 could have been worse as far as ARPGs are concerned. Remember Brave Fencer Musashi? Well, Alundra 2 is a bit better. Not by much, though. Flint’s playability is clunky the majority of the time. Like most ARPGs, there are monsters that come at you and traps to avoid. Keeping Flint alive can be a struggle because he walking pace is snail-like. With the push of a button, he will dash and move much faster. However, this will cause him to slip and slide all over the place. I guess every damn place is made of ice. His attacks, both physical and magical, as well as his jumps are just as awkward. This makes the platforming aspect of the game very frustrating, very quickly.

Alundra 2 does have a fully rotatable camera and fully customizable controls. There are also shortcut keys for items and magic usage. When the main quest gets too harrowing, you can participate in mini-games and side-quests. While these distractions are fun in small doses, they don’t progress the story. At some point, you will end up realizing, “Crap. I still haven’t finished that quest or solved that puzzle.” Ultimately, playing the game is what will get those things completed. Unfortunately, doing so is just plain not fun most of the time.

Key Ingredients.
In theory, Alundra 2 sounds like it could have been amazing. It has a fun story, 3D action with platforms and puzzles, decent voice actors and actresses, and other ingredients that could create an excellent game. Unfortunately, the execution made the game anything but enjoyable. Regardless of your history with the first game, the second game bearing the Alundra name should not be played. There was potential for a classic, but the end result was the obverse.