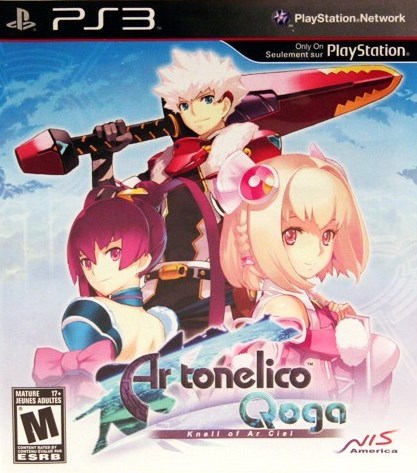 The final episode in the Ar tonelico saga has arrived. Discarding sexual innuendos for in your face cleavage shaking and nearly naked females, Ar tonelico Qoga: Knell of Ar Ciel is a mature game on the outside. On the inside, you’ll find a game that wraps up the entire franchise in a perfect way with the character development, item creation, vast world and history and cast that makes this series stand out. Fans of the first two games need to do themselves a solid and get in on the action of Qoga. If you’re new to the Ar tonelico games, you can still hop right in. You’ll miss a few references, but it’ll still provide a unique experience unlike any other. Due to some game freezing and other minor issues, Ar tonelico Qoga is far from perfect. However, it’s still a game meant for fans of the RPG genre.

The game takes place in the fantastical but fading world of Ar Ciel. In the town of Blue Canyon Hamlet we meet our hero Aoto, a young apprentice steeplejack. As per usual, Aoto is slacking off from his duties. However, he ends up meeting a Reyvateil on the run named Saki. Pursued by the Clustanian Army, Aoto defends their attacks and ends up joining his friend Tatsumi to find out more about Saki. Along the way to the town of Eternus Shaft, they meet another Reyvateil named Finnel. Finnel has her own agendas, but her tsundere personality gets in the way of revealing them when you first meet her. Finally, Aoto meets the renowned Revyatalogist Hikari Gojo. This unlikely team of five must travel the world of Ar Ciel while avoiding the advances of Clustania, the conglomerate called the Archia Think Tank, a variety of creatures known as Antibodies and the hidden secrets of Saki and Finnel. The result not only is one that makes a great story, it is one that wraps up all of Ar tonelico. I can go on about the mysterious Tower of Origin, the Sea of Death, the Rinkernator and other places that encompass the vast world of Ar Ciel, but that would take up too much space. If you’ve played the first two games, you’ll know that there is a vast history to Ar tonelico. Qoga is no different. As you travel the world, your team’s personalities develop into wonderful characters. Expect the unexpected with them. Tidbits of information get revealed to you as progress through the story and in the end, you’re left with yet another well developed cast of characters.

Your Reyvateils will be the ones who reveal the most to you, though. Literally and figuratively. Staying true to it’s predecessors, Ar tonelico Qoga’s various cities have Dive Shops and inns. Inns allow you to have private conversations with your Reyvateils. It’s also where you can make items and customize your song magic. More on that later. The more you get to know your Reyvateil companions in the real world, the sooner you can get to know their true selves in the virtual world. This is where the Dive Shops enter the formula. These allow Aoto to enter Saki’s and Finnel’s Cosmosphere, which is a virtual world that the Reyvateil creates based on her feelings. In the Cosmosphere, you spend Dive Points (earned from battle) to learn more about the character. As you advance through their Cosmospheres, you’ll learn more and more intimate details about them. This, and choices you make throughout the game, will determine which ending you witness. The good thing about Qoga’s multiple endings is that you can use a New Game+ to restart at certain points in the game. This allows you to avoid the hassle of starting from scratch with no money, experience and DP.

Anyways, back to the Cosmopsheres. Instead of unlocking outfits and new song magic, Ar tonelico Qoga does something completely different. Saki and Finnel have multiple personae. Instead of putting on new clothes, they change who they are! Furthermore, going through the Cosmosphere unlocks adorable spirits called Hyumas. Hyumas can equipped to the Reyvateil to add bonuses to the song magic during their Purge. More on that later, too. Once you finish the current Cosmosphere level, you will create a Paradigm Shift. This indicates that you have cleared the level and that the Reyvateil’s feelings have grown for Aoto. However, to be able to enter new areas of the Cosmosphere requires work in the real world. The Cosmospheres are an excellent diversion from the main game, and gave a ton of insight about your Reyvateil characters.

The more you access the Cosmosphere, the more powerful Hyumas you can use. In order to program them, you must ask your Reyvateil’s to shuck their clothing. No, seriously. The most powerful Hyumas can only be equipped if your Reyvateils wear next to nothing. You can offer them gifts if you want them to trust you, or you can continue to access their Cosmospheres. Is this fan service? Absolutely. But, in order for their songs to reach full power, it’s important for them to remove their clothes. So, take what you will with that one. Hopefully you have no qualms about seeing anime chicks wearing few articles of clothing.

These nudist tendencies apply to battles as well. Unlike the first two games, Ar tonelico Qoga features a real-time battle system. As your three vanguard characters (Aoto, Tatsumi and Hikari Gojo) fight off enemies, your Reyvateil of choice charges her song magic. You can switch the vanguard you control on the fly, but Aoto is usually the best option. Hitting the square button allows you to perform a normal strike. This can be done up to three times. Hitting the square button plus a direction on the control pad will allow you to perform a special attack that takes away a small portion of energy. On the bottom of the screen you’ll notice a few things going on. The first is a meter that has intervals in orange and pick. If you strike an enemy when the interval is pink, you’ll gain a huge boost in song power. To the right of the meter is the Heart Gauge. Once a certain amount of energy has been charged, you’ll see the words Purge Ready. This means you can hold down one of the should buttons and shake the controller. Doing so will cause the Reyvateil to strip one layer of clothing, enhance your attacks with an element, grant you a bonus from the equipped Hyuma associated with that element and exponentially increase the strength of the song magic. Sound confusing? It’s not. Just play the game and you’ll slowly get introduced to all the features with ease. Despite their simplicity (what?!) I long for the days of the turn-based combat. These real-time battles have a tendency to get clunky. There isn’t a satisfying thwack when your weapon makes contact, guarding can be tricky and enemy attacks act more of an annoyance. There are a few shining moments, such as unleashing a vanguard’s special attack or watching the Reyvateil decimate the enemies with a song. Unfortunately, getting to that point means mashing the square button many, many times.
Ar tonelico Qoga’s biggest issue is the freezing. While not as bad as Heavy Rain, Qoga will freeze during a battle or during an initial loading sequence from time to time. All I can say to you is this: save. And save often. Nothing is more frustrating than having to restart from a certain point due to a game glitch. The thing that gets me about this is that we’re in the year 2011. Games are still freezing. What’s wrong with this picture? Seriously, game developers, CHECK YOUR WORK! A game should not be freezing, nor should we worry about our consoles being turned into ornaments. Like I said, it’s not as bad as it is in other games, but it’s still a major problem that should have been addressed.

Moving on, let’s look at another issue: the graphics. Ar tonelico Qoga is a pretty game, but the creators opted for boring 3D models instead of cel-shading. Qoga takes place in a world clearly influenced by anime. Heck, half of the signs in the cities are written in hiragana, katakana and kanji. Why not make the characters look this way? Sure, they’re colorful and the spells are flashy, but they don’t feel right. Backgrounds and environments fare a bit better, especially the cities. Another issue are the monster designs. Get ready to see the same robot or Antibody time and time again, only with a different coat of paint. It’s almost as though the creators spent more time perfecting the Reyvateil’s scandalous breast jiggle animation (clearly influenced by Dead or Alive) and their Purge animations (clearly influenced by Sailor Moon, only in reverse order) and forgot about other important issues. At least the music is top-notch. Not only are there more hymns, the regular tracks sound great. Be sure to pick up the game new so you can get the free OST included! Voice acting is done well in English, but the purists (otakus) can switch it to Japanese.

Ar tonelico Qoga: Knell of Ar Ciel will take you about 30 hours to finish. However, there are a ton of endings which can easily be acquired, a wonderful New Game+ option, plenty of fun trophies to unlock and other reasons for playing it again. For me, I went through Saki’s route and immediately started back at a certain point so I can see another route. Whether you decide to see it all or just see a bit, fans of RPGs should pick up this title. Ar tonelico Qoga does have some explicit content, but that’s what the fans of this series have come to expect. Thus, the fans are those that need to check this out the most. There are issues with it, especially the freezing. Also, if you’re unsure of the M rating, you may want to wait until you become exposed to more mature material. However, I couldn’t have asked for a better conclusion to this RPG franchise.