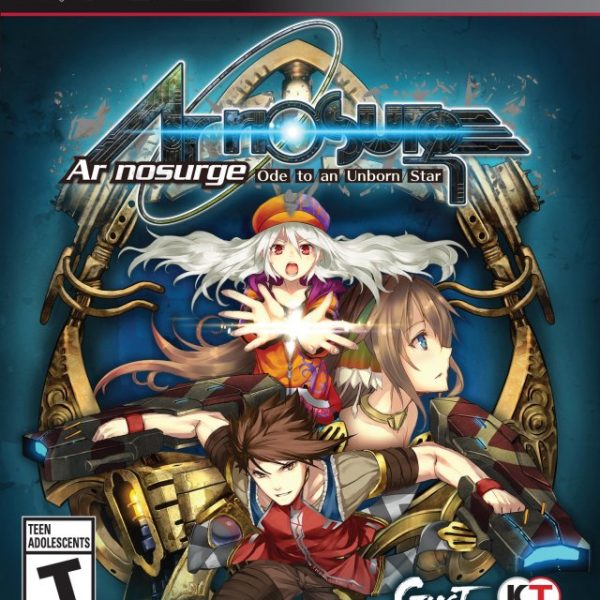 I just love to talk and be social. Conversation is a fabulous art that is slowly starting to deteriorate in our modern society. However, like anyone with common sense, I know when to stop talking. My point of all this? Too much chatter can get annoying; the most extroverted of people need a break from it. Unfortunately, the developers of Ar nosurge: Ode to an Unborn Star never got that memo. The amount of useless banter and dialogue that got tossed around in this RPG set in the same world as Ar tonelico is just one of the problems with the game. Annoying characters, shoddy voice acting, unbalanced battle difficulty and a divisive plot twist turn what might have been an epic RPG into an upsetting one.

Ode to an Unborn star begins in the town of Felion, which is part of a giant colony ship called Orei. There, we meet one of our hero sets: the amnesiac Delta Latanoil and his lady-friend Casty Rianoit. The two live a rather uneventful life until Delta has a vision that shows the location of a captured friend. Delta and Casty follow the clues as they defend against a race known as the Sharl and a villainous church. Ar nosurge has an interesting setting, but it is important to keep in mind that the game is actually a sequel to Ciel nosurge, a visual novel never released outside of Japan. Already, we have a problem. The amount of stuff that happened in Ciel nosurge was enough to make a 70 hour game. While there are resources online that could fill you in on everything, it’s not the same as actually playing the title. Thus, Ar nosurge throws you into the lion’s den. For most of the game, chances are you will be confused as to why/how all of the characters know each other so well. It’s similar to reading a book from somewhere in the middle all the way to the end instead of from the beginning pages. Things get clearer by the time you reach the third of three phases.

Eventually, players will unlock the ability to perform Zapping. Zapping is just a fancy term for switching. Similar to games like Suikoden III and Arc the Lad: Twilight of the Spirits, you simultaneously control two parties, and you must switch between the two to advance the plot. Delta and Casty make one team. The other team is the heroine from Ciel nosurge, Ionasal kkll Preciel and her robot partner, Earthes. Seeing the story unfold from two different perspectives has always been a neat feature in RPGs. Unfortunately, Zapping is actually a component of the story. Personally, the “big plot twists” made me raise an eyebrow.

Ar nosurge gives players a variety of things to do that will make fans of Ar tonelico feel right at home. First, there is a huge list of items to synthesize that fans of Atelier will enjoy. Delta and Earthes are able to dive into their partners and unlock bonuses, CG art and new Song Magic. Instead of Cosmospheres, Ar nosurge uses the term Genometrics. The unique thing about Genometrics is that you actually get to dive into the souls of NPCs as well as those of Casty and Ion. The upside to this is that you get to learn even more about the characters. The downside is that you have to often times make the correct decision to advance. Failing to answer a question properly will mean that you get kicked out of the Genometrics and have to spend more money and more Dive Points to reenter. Near the end of the game, neither becomes a problem. Still, the process gets tedious due to all of the trial and error. One final thing about Ar nosurge that will make Ar tonelico fans happy is the ability to chat with the characters by collecting Conversation Topics.

There is one huge downside to all of this stuff: the amount of dialogue. Made a new item? Get ready for pointless conversation. Doing something in Genometrics? Get ready for some pointless conversation. Heck, half of the topics during the intimate Conversation Topics are pointless. I understand the need to develop the characters, but there is a time when you will just want everyone to shut up and allow you to proceed with the actual story or battle some monsters. Speaking of which, the battle system in Ar nosurge also have its share of ups and downs. Once again, fans of Ar tonelico will spot the similarities. At the top of the screen is the Encounter Gauge that changes colors the closer you are to starting a battle. The length of this gauge indicates the amount of enemies you will have to fight. At the start of a battle, you select a Song Magic to use and take control of your melee fighter. Delta and Earthes are able to perform a variety of skills and they learn more as they level up. As you dish out the damage, the strength of the song will slowly increase. Performing well in battle will let Delta/Earthes have multiple turns. When the enemy attacks, you must defend your heroine from damage. Both sides go back and forth thwacking each other, but you can also use items, attempt to run away or use powerful Friend Skills.

Activating Song Magic will end the battle. Depending on how much energy you acquired, you can wipe out all of the enemies in one shot. This was a neat feature because it was a satisfying feeling watching enemies upon enemies get smoked by a spell. The downside to this is that the game is mind numbingly easy. Even on the most difficult setting, Ar nosurge’s battles are a breeze. Also, battles have a time limit. If you don’t perform well and you run out of time, the battle will end you and you will receive no rewards. Boss battles lack a time limit, but they are either too easy or too unfair. While I really enjoyed the battles as a whole, I would have liked more characters, Song Magic variety, melee skills and enemy designs.

The graphics in Ar nosurge are quite lovely. The various dungeons and towns you visit combine steam punk, Japanese culture, fantasy, and science fiction. The 3D character models move well and the Song Magic is very entertaining to watch. Unlike most games from Gust, conversations use the actual 3D models instead of a 2D still portrait that has a variety of expressions. This makes the world of Ar nosurge more interactive. Some of their outfits are questionable, though. One character named Nay is wearing something that makes her look like a stripper from the 1980s. Plumber crack was never in style, but she has no problem revealing it. Of course, the music in Ar nosurge is fantastic. Alongside the tunes in battle, towns and dungeons, there are phenomenal hymns performed that add an intangible level of emotion. I have no complaints about the music, but I do have complaints about the voice acting. Players can go with English or Japanese, but no matter which one you select, you will run into problems.

Selecting English voice acting means that you hear a fraction of the dialogue. For instance, while you explore a dungeon, your allies have a variety of comments to say. In English, they won’t be voiced. The same can be said about Genometrics, a chunk of story dialogue and even battles. Also, and this is just a minor nitpick, hearing Johnny Yong Bosch as another main character is getting tired. Now, selecting Japanese voice acting means you hear more spoken dialogue. A good variety of the locations in Ar nosurge have Japanese influence, thus it feels more appropriate to select Japanese. However, in battle, you will hear the heroine cheering your melee fighter. With Delta and Casty, there is no problem. With Earthes and Ion, it will drive you insane. Hearing Ion go, “SUGOI! SUGOIYO!” over and over at a screeching level of volume and in such a way that it overlaps is a recipe for madness. Despite listening to an exciting battle track, I need to mute the television during longer battles. I’m not sure what the hell happened during recording or programming, but Ion’s voice just…I can’t anymore with it. I wanted to like Ion and Earthes, but this made me despise them.

As you can see, Ar nosurge has problems. Luckily, content isn’t one of them. This game will last you a good 30 hours. If you want to unlock all of the trophies, you are looking at another 10 hours. A few of the secrets can be permanently missed, but most of the extra content is relatively straightforward. No matter how much you decide to do, you will have to put up with a slew of problems that often time block the good parts of the game. I have a really difficult time recommending Ar nosurge: Ode to an Unborn Star. Fans of RPGs might enjoy it, but they will be lost for the majority of the game due to it being the sequel to Ciel nosurge. Fans of Ar tonelico might enjoy it, but the changes made to the battle system and to the diving might rub some the wrong way. All of the nonsensical chatter that occurs during the game will try anyone’s patience. Ar nosurge: Ode to an Unborn Star is an upsetting title. There are some good things going for it, but chances are you will be hard pressed to focus on them.