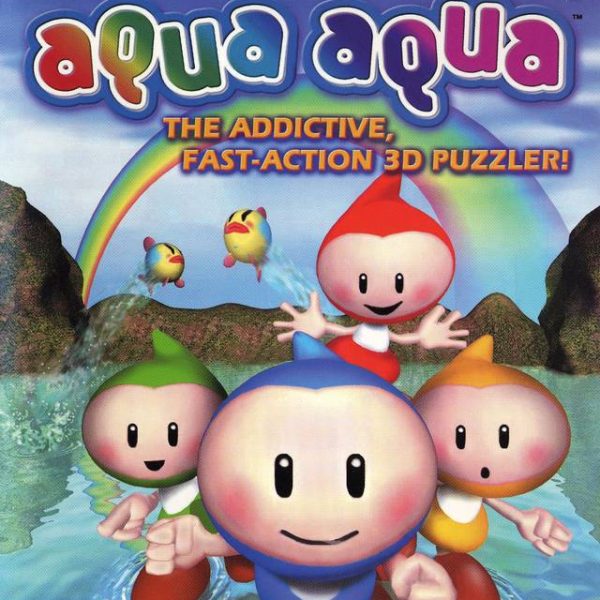 During a moment I was playing Aqua Aqua, someone walked into the room and started watching me. He asked me, “What in the world is going on?” My response was, “Honestly, I have no clue.” Aqua Aqua is a puzzle game that is as bizarre and over the top as they come. It’s simple concepts usually get pushed to the wayside as things start to get more and more hectic the further you get. Gamers that enjoy puzzle games will likely find something redeemable in its weirdness, but once the game ends there is very little reason to go back for more unless it’s for two player mode. Of course, that means actually finding someone else who understands it.

Aqua Aqua takes place on a place called The Planet. Billions of years ago, The Planet was inhabited by four monsters named Sparsit, Slackbridge, Bounderby and Gradgrind. These four fiends wanted to claim The Planet for themselves, but the creator of The Planet decided to send water spirits called Aquas to the land in order to see if they could claim it for themselves. The fact that there is even a story in the first place in Aqua Aqua is worth noting since most puzzle games lack one. In Aqua Aqua’s case, the story is as whimsical and simple as they come. Aside from some precious movies here or there, there isn’t much exposition.

Aqua Aqua is a 3D puzzle game where you need to use randomly shaped pieces to build hills, craters, mountains, and/or holes to trap and hold water. If you let too much water escape, then the game ends. It sounds simple, but there’s much more to it than first glance. The various types of pieces that fall need to be carefully placed across the stage. Uppers are used to raise the land. Downers are used to lower the land. One of your main goals is to balance the height of the board with Uppers and Downers in order to prevent an Earthquake. Alongside Downers, you can use Bombs to lower the land. However, Bombs can also cause holes that allow water to escape. Water pieces will fall and need to be set in the created structures so water doesn’t get lost. At times, it will start to rain. This can cause even more water to fill up.

Dropping all of the above pieces onto the board will add to your score. However, the key to scoring huge points in Aqua Aqua is filling up the board with as much water as possible and then using the Fireball piece to cause an evaporation. During various intervals in the stage, a message will appear indicating that you need to get your score up to a certain point. Otherwise, one of the four fiends will damage the board and cause major leakage.

It’s a lot to keep track of, but things just keep getting weirder in Aqua Aqua. Pieces of junk will randomly appear and be placed on a Bingo card. Rainbows (and even double rainbows) will start shining across the screen. Fish, dinosaurs, and other little animals will take up residence in smaller areas of water. Ice cubes will fall from the sky and freeze your water. Keeping all of this in mind, the best way to succeed in Aqua Aqua and get through its four story levels is to create a variety of tiny lakes and one giant lake. Aqua Aqua is fun, but one of the issues with it is that the controls are overly sensitive. You also need to finish the tutorial mode before you can enjoy other modes like Story and/or Versus. For a game that emphasizes a fast pace, it’s weird that the developers made it a requirement to slog through the dull tutorials.

The presentation in Aqua Aqua is charming and vibrant. The music is relaxing and gets complimented by adorable voice clips. The graphics are impressive considering the game’s age. Early PlayStation 2 games just shy of a new millennium release date usually lack visual appeal, but all of the colors and craziness really shine on the console.

After you get used to the madness in Aqua Aqua and start racking up points, you can expect to finish Story Puzzle Mode in under a couple of hours. Quick Puzzle Mode will allow you to revisit previously completed stages so you can further increase your score. Finally, Versus Puzzle Mode lets another player join in on the watery wackiness. Aqua Aqua is unlike any other puzzle game I have played before. For that reason, I recommend it. Just be prepared for a somewhat tricky learning curve and odd activity.

Overall, 6/10: Aqua Aqua stands out among other 3D puzzle games, but sometimes it stands out for the wrong reasons.