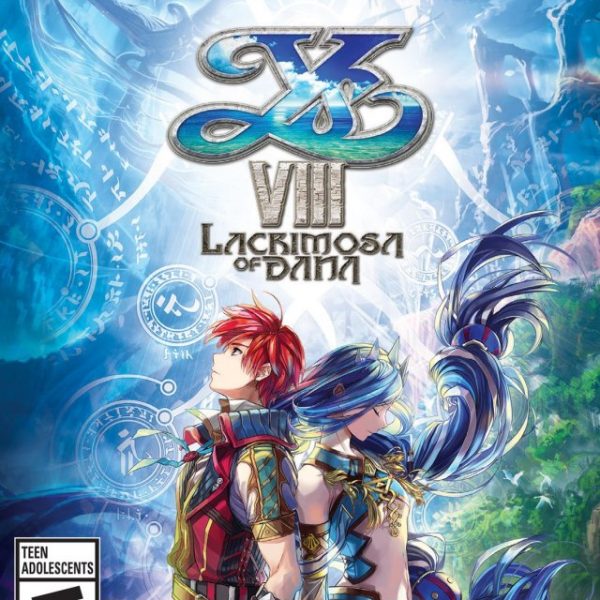 Something I appreciate about the Ys series is that its hero, Adol Christin, is always capable of fending for himself. Others have helped him in his many adventures from the sidelines, but Adol is the one who has always done the heavy lifting. To add to this, he’s always been a man of few words. He doesn’t need to say much; he just wants to go on adventures. Adol, and Ys by extension, were changed in Ys Seven. At first, I embraced the changes. Ys Seven was a fun, quick romp that added new canon to the Ys world and featured a more mature Adol. Memories of Celceta felt like a polished a version of Seven and ended up being one of my favorite games in the series.

In many ways, Ys VIII: Lacrimosa of Dana can be considered an upgrade from Memories of Celceta due to some quality of life features and a similar presentation. It’s unfortunate that neither of these aspects can save Lacrimosa of Dana from its share of problems. The game feels so far removed from what Ys stands for, and as it continues to outstay its welcome, the more evident this becomes. All told, this is my least favorite entry in the series mainly due to it not feeling like Ys.

The game begins with Adol on the Lombardia, a passenger liner. This massive ship is taking him and Dogi to their next adventure. The voyage comes to an abrupt end when a massive sea-monster destroys the ship. Adol wakes up on the Isle of Seiren, an uncharted landmass said to house countless dangers and known in nautical legends for being responsible for many-a-ship getting lost at sea. Adol’s newest adventure takes place entirely on this island. Based on this premise, it sounds like the start of a classic Ys. Adol is all alone and gets the chance to explore brand new territory. For the first chapter, the promise of adventure and discovery while the odds are against you creates a solid blueprint for a new Ys. By the time the second chapter begins, problems with the game begin to slowly trickle in. By the time you discover the origins behind the Isle of Seiren, it’s not only disappointing, but it’s confusing, too. I’m not sure how Lacrimosa of Dana fits into the Ys canon.

Once again, Adol isn’t alone on his journey. Over time, he gets joined by other party members and needs to find other castaways that were on the Lombardia. Adol’s teammates are well-written characters that I enjoyed seeing in action. Hummell Trobaldo, for example, is a “transporter” that doesn’t say much and lets his giant bayonet talk for him. The problem with them is that they always have to open their mouth just when you’re about to start exploring new territory. Was it really necessary for the team to make another comment about needing to be careful? No, it wasn’t. This happens every single time you enter a new area. But, these stalls in progress are nothing when the game shifts perspective to the titular character: Dana. At times, the story will shift to this heroine to shed some light on the happenings on the island years before Adol’s time. If the uninformative conversations with Adol’s teams are a tap on the brakes, Dana’s segments are a full-on slam. Every time I went from exploring the mysterious Isle of Seiren to every-day life with Dana, groans and eye rolls immediately followed.

When exploration resumes, some of your time will be spent finding castaways. Some of these NPCs will provide you with services such as goods, medicine, weapon upgrades and new armor. Cool. All of these NPCs have their own history and events, many of which are locked behind fetch quests. Not cool. Again, Falcom added unnecessary fluff. Adol’s a good person and wants to help when he can. In Lacrimosa of Dana, everyone is relying on Adol for something. These NPCs managed to survive a shipwreck and defend themselves from beasts until Adol found them. And yet, they can’t be bothered to gather their own materials? A final incident in which exploration comes to a stop is when obstacles get in your way. Taking a cue from a Metroidvania, you’ll have to remember to retrace your steps to older areas after you get a certain item or find enough castaways. The game does a good job of keeping track of all of these, but again, it slows down the momentum.

There are times when exploration moves smoothly and this is when Lacrimosa of Dana truly shines. When everyone finally shuts up, Adol and his posse will fight a variety of monsters that are ready to give them a vicious Isle of Seiren welcome. Each character’s weapon has a property: slash, strike or pierce. Most enemies are weak to one of these properties. By exploiting their weakness, you will usually earn better rewards from their defeat. With six characters that can execute a set of unique skills, action and combat rarely grows stale. Using skills frequently increases their power and fills up the Extra Gauge. This allows you to unleash a devastating ultimate attack. Defensively, the Flash Move and Flash Guard have returned. With a supply of vicious monsters and imposing bosses, the combat in Lacrimosa of Dana is fun, but it can be overwhelming in later areas. It’s more important this time to build your party with one of each weapon type or enemies won’t fall. Lacrimosa of Dana’s best action moments are during Raid Battles. Not only is there a lack of inane chatter, but it lets you really utilize all you know about the combat system. Swarms of monsters will attempt to destroy your home base. As the waves continue, the castaways you rescued will offer their support. Dogi will allow you to add upgrades such as catapults and barricades. These raids are one of few examples in which the castaways are actually looking out for one another. Once a raid ends, you get rewarded based on your performance.

The Vita version of Lacrimosa of Dana looks excellent. Adol and the rest of the cast have colorful outfits and move well. The environments are quite lovely and feature blue oceans, lush forests, detailed architecture, and more. The downsides to this loveliness are the loading times. While I’m not sure how the loading times are on other versions, my guess is that the load times on the Vita are worse than them due to the Vita’s hardware. The music is the only aspect of Lacrimosa of Dana that keeps the Ys tradition. From the moment the game begins on the Lombardia to the end of the (overly) long journey, the music is magnificent. Ys has always been filled to the top with fantastic music; Lacrimosa of Dana is no different. There isn’t much to say about it. If you know the series, then you know what’s waiting for you.

It’s just unfortunate that the music is the only aspect that retains a sense of Ys throughout this 40 to 50 hour long journey. By now, you realized that Lacrimosa of Dana outstays its welcome. A generous new game plus and multiple difficulty options might sound tempting for those that wish to experience the journey again or unlock all of the trophies. As I fight for the last couple of trophies needed for a platinum, I keep thinking about how far-removed this entry is from the rest of the series. I enjoyed Ys Seven and Memories of Celceta. A major part of that enjoyment stemmed from the adventures lasting just the right amount of time and still retaining some sense of self. Lacrimosa of Dana’s pacing and overflow of content turns what could have been another grand adventure for everyone’s favorite red-haired adventurer into a bloated expedition that never seems to have an end in sight.

Overall, 6/10: As any other action RPG, Ys VIII: Lacrimosa of Dana would have been fine. But, this is Ys. Adol should start flying solo again.