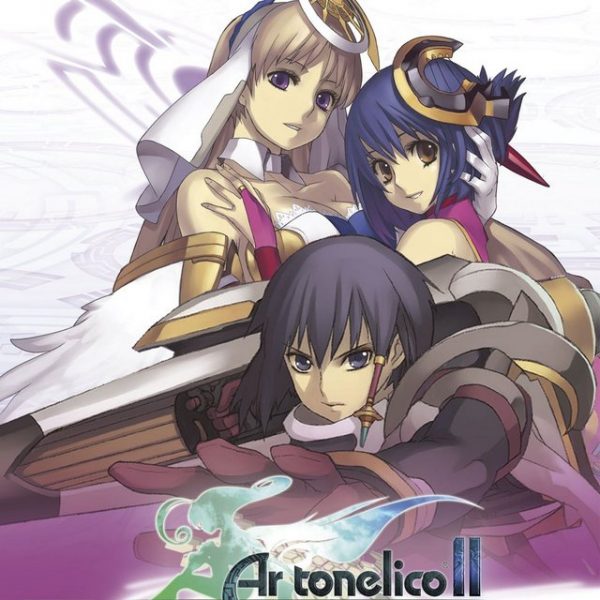 Author’s Note: This review was originally published on June 19th, 2009. Like other reviews of the time, it features “witty” taglines to separate each section. Those that are interested in Ar tonelico II will be happy to know that there’s a fan-made patch out there that improves the translation.

The second installment of the sleeper series arrived on our shores. Ar tonelico II: Melody of Metafalica gives players a new chance to explore well developed characters, a massive world with tons of history, and plenty of silly, adult like humor. While my return to the Ar tonelico world was fun, it was far less enjoyable than my first trip.

Making of Metafalica.
Croix Bartel, a member of the Grand Bell Knights, works diligently to save what little is left of the world of Metafals. During a quest, he and his sister Cocona are told to protect the Holy Maiden, Cloche Leythal Pastalia. The two of them soon meet up with Croix’s girlfriend, Luca Trulyworth. Also a Reyvateil, Luca is humbled by the appearance of the Holy Maiden. These two Reyvateils do not know that they have more in common than meets the eye as they, Croix, and a group of heroes unite to create the paradise known as Metafalica.

Like the first Ar tonelico, there is plenty of history about the world. The two games are not connected, but playing the first game will give you a bit more insight as to how the world of Ar tonelico II functions. The story, while drawn out at times, was surprisingly good. Conversations had a tendency to drag on longer than necessary, but the overall plot was a satisfying one. The characters were a different story. In the first Ar tonelico, there were characters I liked and characters that took up space. In Ar tonelico II, there were characters I liked and characters that angered me to no end. Croix was a lame hero compared to the naive but lovable Lyner, and Luca was no better as far as heroines go. Overall, I expected more out of the characters. Like the first game, you can chose which Reyvateil to follow when you reach a certain point.

Taking a Dive.
Besides an improved item craft system, Ar tonelico II features plenty of stuff for you to do; the most important being the Dive. You can enter an area called a Dive Shop. The Dive Shops allow Croix to enter Luca’s or Cloche’s Cosmosphere, which is a virtual world that the Reyvateil creates based on her feelings. In the Cosmosphere, you spend Dive Points (earned from battle) to learn more about the character. Not only that, but you will also be able to craft Song Magic, which is the way Reyvateils fight, in the Cosmosphere. Once you finish the current Cosmosphere level, you will create a Paradigm Shift. This indicates that you have cleared the level and that the Reyvateil’s feelings have grown. However, to be able to enter new areas of the Cosmosphere requires work in the real world. The Cosmospheres returning were an excellent diversion from the main game, and gave a ton of insight about the new Reyvateil characters.

The other thing that reveals more to you about Luca and Cloche are Talk Topics. Whether you find them in the field or get them from a Cosmosphere, resting at an inn will allow you chat with your Reyvateil about many things. Again, these conversations lead to more information about the characters. Not only that, but they help unlock new areas of the Cosmosphere. So, as you can see, there is a cycle of events that allows you to learn more about Cloche and Luca, as well as obtain new spells.

Wait! There’s More!
Diving is important, but there is so much more that you can do. Reyvateils do not level up with experience. Instead, they have to take baths together and set crystals in the water to improve their stats.

As a knight, Croix must find IPDs and contain them. An IPD is an infected Reyvateil. Once contained, Luca can enter their mind and heal them. After the healing process is finished, they can not only give you stat boosts to your characters, but they can join the Cloche Fan Club, as well. The more fans, the more powerful a type of song magic becomes.

Needless to say, there is plenty to do in Ar tonelico II. Unfortunately, this is where a problem comes into play: conversation. Xenogears suffered from having too much babble, too often. Ar tonelico II, while not as bad, has the same problem. Before and after any event, there is endless conversation. There will be times when you will just mash the X button to move on with the story and disregard such meaningless banter. Despite the new features, the conversation should have been reduced to make said new features more enjoyable.

Two Babes are Better than One!
The first Ar tonelico was one of the easiest games I have ever played. While the challenge was upped a notch in the second installment, the game was still a breeze to finish. Heck, the only challenge came from the fact that the game was full of glitches, bugs, and other issues. Really, there was no excuse for any of these bugs and they made the game sloppy.

That aside, exploration is the same as it was in the first title, only difference being that there is no jumping. As you explore a dungeon, a bar will change color from blue to red, red indicating that you are about to battle. Battles are a bit more intuitive than before because this time, you have two Reyvateils that you have to defend and two characters in the front row. At the start of the battle, you chose a song for the girls to sing, and then the fun can begin. There are two phases in this system. The attack phase is when you attack the enemy. Depending on the direction you press the control pad, your vanguard row will use different attacks. As you level up, you gain access to new attacks. These attacks build up the power of the song magic. If you use the right attacks, your vanguards can execute devastating blows. Also, you can evolve your song magic into more powerful forms. Ultimately, you may be able to activate a Dual Synchronicity Change and activate Dual Song Magic.

During the defense phase, you have to hit timed button presses in order to minimize damage to your vanguards. With the right timing, you will not only receive zero damage, but build up the power of the song as well. When it’s the attack phase and you hit the circle button, the song magic is activated and you get to watch the damage unfold. In a regular battle, the song needs to be charged for about one or two rounds. In boss battles, it will take a bit longer. The goal of song magic is to finish off the enemies. Near the end of the game, you will have an arsenal of powerful magic. But, at that point, your vanguards will be crazy-powerful and capable of finishing off enemies without song magic. So, as you can see, the battles are a bit different from before. Unfortunately, one similarity is that they are just as easy.

New and Improved.
In typical NI fashion, you will be looking at a gorgeously drawn 2D world with 2D anime sprites. From the monsters to the mazes, this game was beautifully made. Well, for the most part. At times, the sprites look a bit disproportionate. Still, the game looks great. One great thing about the graphics is that the completion of a Cosmosphere level grants your Reyvateil a new costume. Seeing these in action is great. Even more great is the fact that the music was improved substantially from the first title. Not only are there more hymns, but the normal tracks are much, much better to the ears. The voice acting can be English or Japanese, whichever you prefer.

Doing Too Much.
This adventure will last you about 40 hours or so. If you want to see all of the endings, then that will give you another 40 hours. There are plenty of treasures to find, as well as items to make. Doing all of that will easily add an extra 30 hours. For me, all of the “stuff” would have been too much for me to do. Sure, I dabbled here and there in some side-quests, but I was ready for the game to be over by the time I reached the final boss. After you save your complete game, you will find that you have unlocked some extras. You can watch movies, listen to the music, view character art, and see how many things you covered with your Reyvateils. Because it is an RPG, you should buy this game. If you buy it new, you will be treated to a delightful box set. Besides the game, you will get an art book and a sound track. Ar tonelico II has some bugs, as well as some flaws. My biggest complaint was it being way too text heavy. Still, if you enjoyed the first Ar tonelico, you will more than likely enjoy the second. While nothing can compare to your first time, there is no reason why you should disregard a second. Sure, it may not be as enjoyable, but it will still be fun.