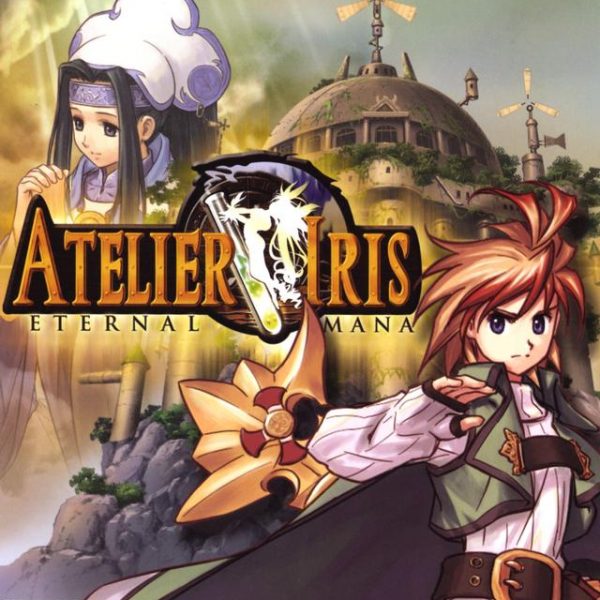 Author’s Note: This review was originally posted on August 23rd, 2005. When it was announced that North America was getting its first Atelier, I was thrilled. I remember speeding to the game store to both preorder it and pick it up. Eternal Mana was a bit of a letdown, but its legacy as the first localized Atelier can never be taken away.

The answer to my tagline question is simple! It’s Atelier Iris: Eternal Mana. Finally, North Americans got to experience an Atelier game thanks to Nippon Ichi. Gust’s long running Atelier series usually are rather free-roaming and non-linear, but the PS2 Atelier is a story driven RPG for all to enjoy. Taking elements of some games, adding some of Gust’s own, and being fully translated to perfection…AI: EM delivers an almost solid RPG experience.

I say almost solid because the one area where the game is truly lacking is the story. The title of the game is mis-leading: you don’t control Iris in this game. Instead, you are stuck with semi-annoying Klein Kisling and his best mana pal, Popo in the world of Regallzine. The two of them are out to make a name for Klein so he can become a great alchemist. Along the way, they’ll meet up with some colorful characters that help Klein on his journey and eventually help him to save the world from an evil alchemist. The story is almost too predictable, even for a light-hearted RPG. The characters, while amusing when they speak to eachother in certain dialogue sequences accompanied by nice, hand-drawn portraits, also have very predictable things going on for them. You do learn everything about them, but you do it in such an un-original way. It does pick up a little speed near the end, but it really doesn’t help much. Characters develop over time, but most of them are beyond cliche. However, keep in mind that NI did the translation, so the one good thing going for the game’s story is the humor. Indeed, there will be times when you will “LOL” because of what someone said.

There is plenty of spoken dialogue in this game, so obviously there is plenty that the characters will say. The voices in this game can be either English or Japanese. Both worked great because you’ll most likely recognize some of the voice actors from other games. Other sound affects sound great as well. The other thing you’ll be hearing in this game is the music, most of which is quite kick ass. All of the tracks fit whatever environment you happen to be in at the time, and all of the tracks aren’t short so you won’t be hearing them multiple times. The OST is worth hunting down, so keep your eyes peeled for it.

Visually, the game is just as great. With the exception of the very plain world map, the locations and locales of Regallzine look great. Colors colors everywhere and not a drop to drink…er…I mean not a shade to…bah, you get the idea: the world is colorful. The 2D sprites travel through 2D environments, all of which have objects and items to interact with. Too bad most of the locations are small and the dungeons are rather short. Still, this game is beautiful. Yes, this is coming from a guy who loves 2D over 3D, but you’re missing out on a beautiful world if you are anti-2D. The battles are also beautiful. Characters look bigger, have cool attacks, and fight some of the most interesting looking monsters. They range from adorable to intimidating, but unfortunately you’ll see a lot of the same models. There are like 8 versions of a type of slime called Punis, so either Gust got lazy or they liked using the same model. Despite this shortcoming, the graphics are amazing.

Now you’re probably wondering how do those three games in the tagline make up the world of AI: EM. Let’s first talk about the Alundra aspects. You control Klein in this game as he tromps through dungeons, cities, fields, and mountains. At the start of the game, Klein can only do a few things. The first and most important is the ability to jump. By jumping a la Alundra Klein can reach new areas at new heights. The second thing Klein can do is Elemental Extraction, which is where he takes his magical staff out and extracts elements from objects. By objects, I mean basically everything: crates, signs, barrels, crystals, magic orbs, fire places…all of these and more contain different elements for Klein to use. Elements play a huge role in this game in that they are used to create Mana Items. Mana Items are items only Klein can make and use, all of which require a certain amount of elemental power. Mana spirits use the elemental power to create the items, however each spirit can only handle specific elements. This means that Nymph, the water mana, will never be able to help create a Flame or an Herbal Drop because she can’t handle some of their elements. Mana spirits also play important roles in battles, but I’ll get to that later. Extraction is also used in puzzle solving. When you are travelling around, you’ll notice areas out of reach. Eventually, Klein can reach those areas by creating a barrier, flying, or blasting open a passage way with a fire ball thanks to the help of new mana spirits. Finding all the spirits will take a bit of work, but it’s nothing too difficult at all. All this and more will become available to you as you progress through the game. See where the Alundra idea comes into play?

Since we’re on the topic of game play, how about I mention the FFVIII aspects: the battles. You can have up to three characters in at a time, each equipped one weapon and two pieces of armor. Each character has their own set of special skills that can be upgraded with points obtained after a character levels up. The battle system is a typical turn based system where speedier characters attack first (and in some cases, multiple times). There are physical and magical attacks so it’s up to you to determine which attack works best on the many enemies you will be facing. Enemies often times travel in close together groups, and fortunately many characters have attacks that hit groups of enemies. Some enemies are immune to physical attacks, so you have to use magic attacks to hurt them. In battle, you can attack, defend, use items, run away, use skills, or switch characters in and out of battle. Switching doesn’t cost a turn, and it can even be used on characters who have been KO’d. Klein has all of these options, and he can also use Mana Items and create Mana Items on the spot (as long as the elements are there for him). That’s really all about there is to say about the battle system. It’s very basic and requires little thought. Sure, some bosses are a real challenge, but for the most part it’s a very easy game. Does it get old? Yes, but that’s how it typically goes in RPGs.

“Ok…that had nothing to do with FFVIII.” Slow down, slugger. I’m getting to that right now. First off, Klein’s Elemental Extraction can be used in battle. If he finishes off an enemy with it, he gains that enemies elements. It’s quite handy because it kills the foe AND gets you some more elements to use. Think of it as an upgraded Draw system, only this time only one character can use it. Also, mana spirits are used the same way as the GFs in FFVIII’s Junction system. You can equip one mana spirit to a character. Doing this will raise certain stats. Also, when the spirit levels up, you will get more points distributed to certain skills. This is a great way to MAX level some skills early on in the game. Finally, mana spirits have feelings like the GFs do. If you keep them healthy and happy, you’ll get nice rewards! You feed them items to make them feel happy and healthy. Now do you see the FFVIII aspects?

Item creation plays a huge role in AI: EM and it was also my favorite part of the game. You’ll be making almost 400 items and granted 60% of them are useless, you still will end up making them if you want to get a perfect game. In most shops, the owner will give you new resipies and formulas to create new items. You will typically create the item intended with the regular ingredients, and then move on to trying to get a new item formed by using new ingredients. The main reason I personally wanted to create all of these items was to show them all to Lector. Lector creates a list of items that you find. For every one item you show her, you get 100 cole (cole is the currency in this game). Also, she’ll make a series of specific items. Complete a series and you unlock things like character art, introductions, and the music collection. Making items will take up most of the game, at least 40 hours! It seems complicated at first, but it really is not after you make a few things. A lot of items can be made right off the bat, others will take you the entire course of the game. An amusing thing about item creation is that when a new item is made, the characters will talk about it and usually what they say is funny.

The Legend of Mana aspect comes in when you do weapon synthesis. By having a mana spirit create a mana crystal from a mana stone, you can you equip the crystal to certain weapons and armor to upgrade stats. If used correctly, weapon synthesis can yield amazing results such as delivering 8 critical hits with one blow! It takes time and money, but it’s worth it. However, it isn’t needed until the bonus dungeon because, as I said, the game is on the easy side. Still, it’s quite fun to upgrade your weapons and armor. Like LoM, you need the right materials to create the best things possible.

The game is short, running about 20 or so hours. Item completion for Lector will cause the game to last much longer. Either way, I say buy this game. I think it may become hard to find in the future, so might as well shell out the 50 dollars and pick it up while it’s still hot. There is a lot to do after you beat the game. There are multiple, short side quests to be done, there is a bonus dungeon, and you can MAX out your characters skills. Also weapon and item synthesis will definitely keep you coming back for more.

Unfortunately, you can’t put your copies of FFVIII, Alundra, and Legend of Mana into a big ol’ pot and hope that Atelier Iris pops out. You should still check out this game. It is really lacking in terms of story and the battles are a drag at times, but with everything else thrown in you’ve got yourself a good game to play.