Azure Dreams could have been named The Legend of Puffy Lips. 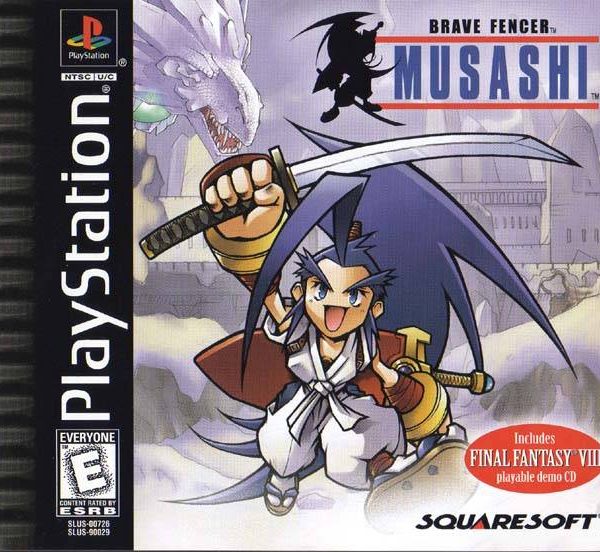 Author’s Note: Yikes. This review was originally published on July 26th, 2003. At the time, I’m not sure why I was so hard on Brave Fencer. It’s not a bad game by any means. But, it’s interesting to think about what was going on in my head at the time of its writing. Feel free to continue reading if you want a good laugh, and know that this is a solid 7/10 game.

I borrowed this game from my friend because I heard it was semi-fun, and it could keep me occupied until I got something else. Besides, it had the FFVIII demo inside so it couldn’t be ALL that bad. Well…

Story: 4/10
The palace of Allucaneet (as in ALL YOU CAN EAT) is under attack. Princess Fillet has summoned a warrior named Musashi to save the land! Only Musashi can use the power of Fusion and Lumina (two swords) and unlock the five magical scrolls.

I love cute little storylines, but the way the characters act is what made the story bad. It’s just really wrong how they went about telling the tale. I mean, it’s like Square was both drunk and stoned when making it. It’s just so bizarre, that it will not make sense at times!

Gameplay, Town: 7/10
This is good because there is so much to do. In the town (yes, only one town), there are many unique citizens to talk to. Each one is different and funny. You can also buy your items, rest at the inn, and even buy action figures. Also, you can choose to rest whenever you wish in order to pass up time (because time is always flowing). You can also visit the castle, watch plays, and a bunch of other stuff. I liked the amount of little things you could do. It could get VERY, VERY, VERY repetitive at times, not to mention that this is the only town.

Gameplay, Dungeons: 6/10
This was very fun at first, don’t get me wrong, but it got so tedious after a while, I just was so annoyed with it. Your fighting is just your hackin’ and slashin’. You’re never really overwhelmed with enemies, but recovering your energy is rather difficult. Musashi has two swords, Fusion and Lumina. Fusion can steal monster abilities; very cool. Lumina uses the powers of the magic scrolls you’ve unlocked. You can also combine the two swords to create combos. Musashi learns new moves as the game progresses.

The camera really can suck at times, especially on the log ride. Also, saving your progress is impossible in dungeons. Instead, you have a quick save option. Overall, it’s fun at first. But it just gets really blah when about halfway through the game.

Characters: 2/10
Very bad. All the characters except for Musashi’s rival are terrible, annoying, and just plain stupid. I had to remind myself at times that this was a Square game.

Graphics: 2/10
The 3D environments are very blocky, but colorful. They get the job done, but could’ve been much better. The character graphics on the other hand are vile. They look like miniature Legos with NO EXPRESSION! Musashi’s hair looks like a bush!

Music and Sound: 3/10
The music is good, I will give the game that credibility. But the sounds are terrible, just terrible. This game has voice-overs, but they’re so disgustingly piercing, you’ll have to turn the sound (if not the game) off. I’m very content with no voices.

Replay Value: 1/10
No extras to speak of, and a very non-deep storyline. Also, you’re not going to want to do some of those terrible dungeons again. I’m thinking replay value is really bad.

Difficulty: Medium
A lot of the bosses are tough, and the jumping platforms is challenging too. But other than that, you’re going to breeze through this adventure.

Buy or Rent: Rent
Rent, because many of you will not like it, especially by today’s standards.

In conclusion, the game is full of bad. It does have some charms, but nothing that sticks out above the rest.