Avoid the overpriced. Pick up Valkyrie Profile: Lenneth in order to experience one of the greatest RPGs of all time without breaking the bank. 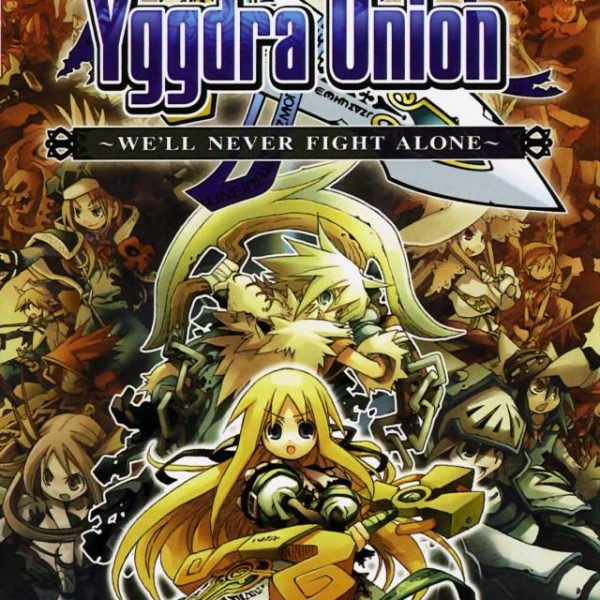 Author’s Note: This review was originally published on December 26th, 2008. Like other reviews of the time, it features “witty” tagline separators for each section.

The Game Boy Advance enjoyed a long life. Near the end of the journey, it got hit with an amazing SRPG called Yggdra Union. This game featured a steep learning curve and unforgiving difficulty, but those who saw it through to the end were treated to an unforgettable SRPG experience. After Sting and Atlus remade Riviera: The Promised Land for the PSP, I hoped and prayed that they would do the same for Yggdra Union. The prayers were answered and the game was remade for my favorite portable system of all time. Regardless of your history with Yggdra Union, everyone should give this game a shot.

Queendom and Crown.
Yggdra Yuril Artwaltz is the young princess of Fantasinia, once a prosperous kingdom ruled by her virtuous parents. However, the golden era ended when the Emperor of Carnage, Gulcasa of Bronquia, launched a blitzkrieg. The entire kingdom was destroyed, and young Yggdra was the only one left alive. She flees her kingdom with the family heirloom, the holy sword Gran Centurio, clutched in her hands. She meets up with a young thief named Milanor, and the two of them set out to stop Gulcasa’s reighn of terror and bring peace back to Fantasinia.

The cover of the box may lead you to believe that this is a light-hearted game. I assure you, that it is quite the opposite. Yggdra Union tells the story of a war that sweeps the entire land. The results of the war are destroyed kingdoms, lost lives, and crushed spirits. Needless to say, this story does not pull any punches. Regardless of this fact, Yggdra Union is a masterpiece. Yggdra is accompanied by some excellent characters. Most importantly, you get to watch Yggdra transform from a naieve princess into a powerful, respectable queen. The story and characters both deliver, but I warn you that the game is not meant for the faint of heart.

The Curve on the Cards.
Another reason why this game may not be for the faint of heart is because of the difficulty. However, if you have played the GBA version, you might be excited to learn that the challenge has been significantly reduced from the GBA version. If you wish to replay the game as it was presented on the GBA, you can unlock Hard mode. Regardless of the mode you select, you will notice that Yggdra Union is a very different kind of game. The game follows the flow of a story event, a battle, and another story event. When it’s time to battle, you are given conditions of victory and defeat. Next, you chose your characters. New to the PSP version are some extra characters you can recruit.

Here, you select cards to use and the learning curve kicks into high gear. Each card has a skill and a number. The number corresponds to how many squares your team can move across the battle field, and the skill is, obviously, what the card does. Think of it as your magic. However, on each card is also a weapon symbol, and only those who lead an attack can allow him/her and everyone else in their party to use that skill. This person is called a Union Ace. With your cards selected, you can begin the battle.

We’ll Never Fight Alone!
The battle system plays out in typical player turn, enemy turn, fashion. Once either victory or defeat conditions are met, the battle ends. Should lose the battle, the enemies will be toned down in level and skill when you retry. At the start of your turn you pick a card. Next, you move your team members until that number on the card’s corner reaches zero. If you are near an enemy, you can initiate a battle. You can only battle once per turn. So, how do you take down all these enemies if you can only battle once?

The answer comes with the unique Union System. When you chose to attack with your leading character, team members who are next to this person participate in a union. This means that after the first character finishes a battle, the second character goes and so on. For a male character, the allies must be in an X formation, whereas female characters can have their allies in a + formation. Yes, this sounds confusing, but the tutorials help with this feature. The unions allow for some strategic thinking and planning. However, the fun does not stop here.

When the battle starts, the person leading the battle attacks, and then the opposing side counterattacks. Finally, both teams duke it out until all of the team members on one side have fallen. While this happening, you can control a few aspects of the clash. Holding right drains a bar and increases attack power. Holding left fills up this meter, but lowers your attack power. It is important to note that the weapon types in this game have a rock-paper-scissors quality. Swords are strong against axes, which are strong against spears, which are strong against swords. Furthermore, there are staffs for necromancers, brooms for witches, bow and arrows for hunters, crossbows for assassins, and scythes for dragon riders. Knights are mounted on horses, and there is also a class that rides griffins. Each class has a strenght and weakness, allowing plenty of strategic fun.

But wait, there is more! Terrain, the time of day, and the equipment will effect the strength of both allies and enemies. Most importantly, and if certain requirements are met, you can perform skills. Remember that meter that gets filled with the holding of the left button? When that is at 100 percent, you can unleash the card’s skill. These can easily turn the tides of battle. However, enemies can use their own skills, so it is important to be wary of their own meter that fills up during the clash.

The clash finally ends when one side is no longer standing. After a fight, the losing unit will lose Morale. When all Morale is gone, the unit is killed. A clash ends when all units in the union have fought at least once. Once this happens, you are presented with the results screen. Your characters will gain experience from the battle. Leveling up will allow your characters to gain stat increases and a bit of health recovered. When an enemy perishes, it may leave an item. When one of your characters perishes, all of their experience resets to zero and they have one point of health for the next battle.

If you are still reading this, then I commend you. As you can see, there is so much going on in Yggdra Union. I know that it sounds confusing, but the learning curve and the difficutly have been toned down for the PSP version. Bottom line, battles are fun as hell. Using powerful skills and winning your way to victory is great, especially for hard core SRPG players. I was hooked onto this game from the get-go on the GBA, and I was hooked from the get-go on the PSP. The new items and characters allowed me to experience Yggdra Union in an all new way.

Pretty, Pretty Princess.
I felt that the graphics in Yggdra Union on the GBA were amazing. Was it possible to improve them on the PSP? Obviously, the answer is yes. The sprites are more crisp, the portraits have more color, and there is a beautiful anime opening when you load the game. Special effects are far more vivid than they were on the GBA. Unfortunately, the sprites on the maps look like they walked out of an 8-bit cartridge. Despite this fact, everything else about the game’s graphis is gorgeous.

Fabulous 50.
Those who pick up the game new may receive a free OST along with it. With over 50 awesome tracks, this is one soundtrack you cannot miss. Sure, some of the tunes sound the same, but the battle music is unique for each of your characters. Furthermore, the PSP version features English or Japanese voice acting. Both were done exceptionally well and give the characters more personality.

A Royal Treat.
I highly recommend Yggdra Union to any SRPG enthusiast. It may be difficult at times, but the rewards to be reaped from finishing the game are well worth the trouble you may go through. Besides, the difficulty has been toned down a bit from before. Those who played the original should still check out the game for the new content. Those who have yet to play the original are highly advised to pick this title up and never let it go. One of my favorite games of all time, Yggdra Union is even more excellent on the PSP.