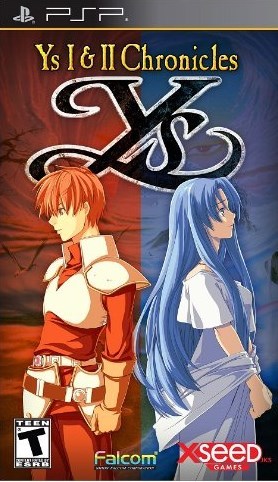 In the year 2009, DS owners had the chance to see where the legend of Ys began thanks to the fine people of Atlus and Falcom. The remakes of Ys and Ys II were lovely titles that stayed true to the franchise, yet had enough of new content to make them worthy of being enhanced ports. In the year 2010, XSeed acquired rights to three Ys titles. Fans of the series, myself included, were flabbergasted. The idea of playing Ys on the PSP felt like a dream come true. For the most part, it was. Ys 7 was an exciting, original title. Ys: The Oath in Felghana was a remake of a treasured classic. Ys I and II Chronicles, a UMD containing both Ys and Ys II is the best looking version available of Ys and Ys II. However, you’re better off playing the DS version.

Sailing from the land Promarock, Adol Christin yearns for adventure. He ends up getting shipwrecked on the shores of Esteria. As if answering the call of fate, it turns out that this red-haired warrior is the destined hero said to save all of Esteria and return to the land of Ys. Now, Adol has to deal with ancient wisemen, prophecies, lovely goddesses and a whole lot of monster bad guys. The origins of Ys are an exciting way for newcomers to get acquainted with Adol and his friends. He’ll meet friends found in future titles like Dogi and Feena, and set the stage for being one of the greatest video game heroes of all time. This version is also the one with the (alleged) best script. Having finished both titles, I see little difference between Atlus’ and XSeed’s. Pick your battles.

Speaking of which, the biggest problem with Ys is the battle (bump) system. In Adol’s early days from the 1980s, his method of attack would be to run into an enemy at an angle and continue to bump into it until it died. This is the same for bosses. On the one hand, it makes combat extremely brisk. On the other hand, it’s annoying not being able to swing your sword. When Adol is trapped on a narrow hallway, his attacks won’t do as much damage and he’ll get his HP slowly reduced. This doesn’t prove to be as much of a problem in Ys II when he acquires magic. Still, it’s an ancient game mechanic that should have been an option to turn off.

Aside from that, everything is basic. You run from place to place, hunt down key items, fight a boss, report back to a town and advance the story. Ys is known for being rather unclear on how to progress, so it was very kind of XSeed to provide a guide for the first Ys in case you get lost. If you get lost in Ys II, you have to refer to a walkthrough. This version has a glossary of terms and people, so I question why it doesn’t have a mini-guide telling Adol where he should go next. In fact, the DS version had this feature.

Adol’s first adventures can be finished in 15 hours. Finishing the games unlocks time trials and boss rush modes. If there’s any reason to get it, it’d be because it completes the spine art. Truth be told, if you’ve played Ys and Ys II already, you’re not missing a thing. This version looks the best, and the ability to pick between three sound systems for the music is a nifty feature. However, the bump system should have been an option to turn off. Overall, Ys is a great series that has had it’s share of remakes. While there is nothing wrong with this remake, you have better options available.