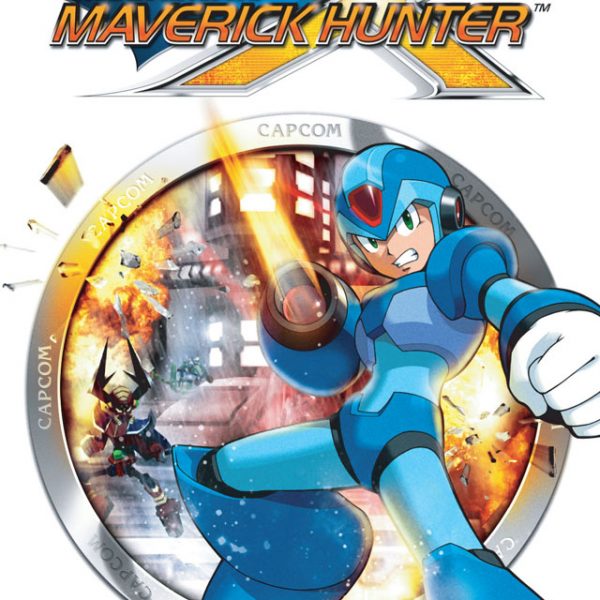 It’s the blue bomber in all of his blowing stuff up glory! Mega Man Maverick Hunter X is a remake of the very first Mega Man X game released on the SNES. I think I have beaten that game about 100 times, and I plan on doing the same with the new Mega Man X for the PSP. Not to mention there are some great things to unlock after you complete the game a few times.

If you’ve been living under a rock, then I’ll educate you about MMX. Basically, you have X who wants to fight for peace, Zero who is his best friend, and Sigma who wants to have Reploids rule the world. X needs to face 8 Mavericks under control of Sigma and then face the big guy himself. Along the way, X will do a bit of soul-searching to discover why he was made and what his future holds. In every MMX game, you’ll be doing the exact same thing as far as plot is concerned, but it is fun to see the new bosses you’ll be facing and the new things X learns. Story, however, was never a strong point with any Capcom product, but game play is a different story.

Side-scrolling action we all know and love is back and better than ever. New to this upgraded version of MMX are little conversations between bosses, spoken dialogue between the main characters, and cool new level designs. However, these new features are nothing without the classic Mega Man X game play. You control X as he shoots baddies with charged shots, wall climbs, and earns the special moves of the bosses he kills. There are eight heart tanks to find to increase yor life meter and four energy tanks to refill your life. There are also four hidden pods that contain power ups for X that increase his abilities. As I previously mentioned, the level design for some of the levels has changed. In fact, even if you played the original MMX, you’ll find yourself still having trouble with certain bosses and jumps and what not. I know I did. But that was also half the fun of this game; trying to figure out the correct boss order and obtaining all of the power-ups. All in all, the game play was left unchanged for the most part, but still has some cool new features.

Another new upgrade comes in the graphics and music. The graphics are 3D characters on a 2D field. How do I feel about this? Well, other than the fact that the characters look kind of blocky, the new look is great. The colors on the beautiful PSP screen are to die for. There are also some animated movies which show that the PSP is the best hand-held system of this generation. The music you’ll recognize if you’ve played the first MMX, however the tunes have been upgraded and remixed with some more modern instrumentation. There are also voices in the game. For the most part, I approve of the cast. However, some of the bosses really got annoying. Sting Chameleon’s voice is probably the most non-fitting of them all.

Once the game is finished there are still some new things to do. You can play as Vile, watch a cool anime movie, and try the Mega Man Power Up demo. Even still, MMX games are all about replay value and coming back again and again so once you unlock everything, you’ll still be playing the game over and over.

I was quite pleased with the end result of this game. X has never looked better! I will say that I wish the game was longer and a bit more challenging, but these cons can be overlooked easily. Finally, this is a PSP game that will be worth keeping and not selling for credit.