Lunar is legendary, but this game is MEGA-LEGENDARY! 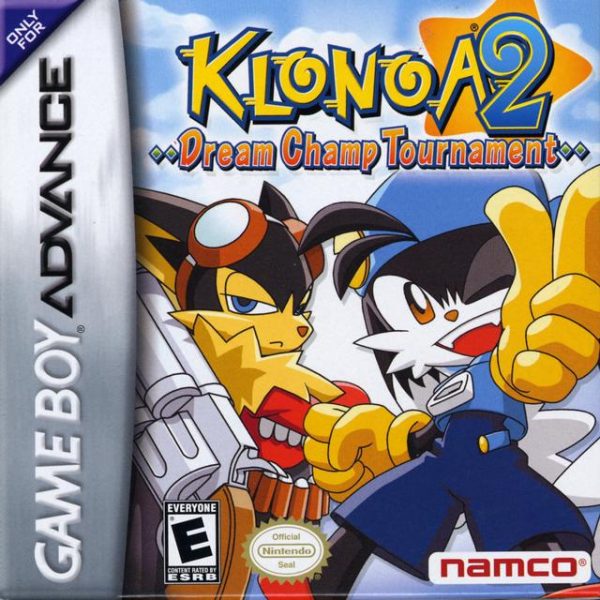 One of my minor complaints about Klonoa: Empire of Dreams was its difficulty. I realize that the Klonoa series is catered more towards a younger audience, but I felt that his debut on the Game Boy Advance was too easy for gamers of any age. Still, I had a good time with it and I was anxious to see more of him and his floppy ears in Klonoa 2: Dream Champ Tournament. When I reached its third world, Dream Champ Tournament’s difficulty level turned 180 degrees from Empire of Dreams. Complex puzzles? Check. Tough bosses? Check. Tricky auto-scrolling levels? Check. The difficulty featured in Dream Champ Tournament is both welcoming and surprising. Sure, it’s nothing that would cause you to pull out your hair, but for a Klonoa title, it’s a challenge.

Dream Champ Tournament picks up immediately after the conclusion of Empire of Dreams. That said, not playing Empire of Dreams won’t impact your enjoyment of the story. Upon waking up from a dream, Klonoa gets transported to a mechanical world ran by cyborg named Garlen. Garlen has gathered a variety of heroes together to compete in a race called the Dream Champ Tournament. The winner of this tourney will win a coveted trophy and a hefty sum of money. Klonoa is not one to back out of a challenge, but with the mysterious and arrogant Gantz watching his every move and Garlen’s lack of candidness, it’s clear that Klonoa’s newest adventure won’t be easy. Dream Champ Tournament’s story is predictable, but fun. Watching Klonoa and the rest of the cast interact with one another is as enjoyable as ever. Unfortunately, some of the dialogue sequences can be long-winded and/or suffer from some questionable translation choices.

The main draw of Klonoa 2: Dream Champ Tournament is the classic game play. Klonoa will explore five worlds that consist of eight visions. All of Klonoa’s techniques have returned. He can move either left or right, jump, stay in the air for a second by flapping his hears and fire a Wind Bullet from his ring. The Wind Bullet is used to hit switches and capture enemies. The enemies captured with the Wind Bullet can be fired at obstacles or used as a boost to give Klonoa a useful double-jump. In order to finish a vision, Klonoa needs to gather three Moon Stones. Other collectibles in the visions include Sun Stones and Dream Crystals. Most visions have 30 Dream Crystals. By collecting all of them, you can unlock artwork. Collecting each vision’s Sun Stone will unlock an extra vision in the current world. Aside from standard platforming visions, there are three other types of visions that add some variety. The first places Klonoa on his hover board in either a front or back point of view. These are really fun, but also really challenging. Auto-scrolling levels have returned and are just as exciting as ever. Finally, there are the boss and race visions. The last vision in each world has Klonoa racing against an opponent -AND- facing a boss five times his size. For those that wish to collet everything, Dream Champ Tournament will provide you with a hearty challenge. Even for those that don’t care about collectibles, Dream Champ Tournament’s puzzles and boss fights are miles ahead of what they were in Empire of Dreams. To me, this makes the game much more fun. I was able to breeze through nearly every level in Empire of Dreams. By the time I reached the third world, I had to backtrack, return and/or double-check every vision for missing collectibles or I had to restart a stage due to a puzzle’s difficulty.

Not only has the difficulty been improved, but the presentation has been slightly improved, too. The sprites are crisper, the colors are brighter and the overall variety is greater. The dialogue sequences are basic, but they work. It’s nice to see Klonoa and the cast displayed in a brighter picture. Unfortunately, the music is still lacking. The tracks range from monotonous to average. For a series with so much creativity, it’s a shame that the music doesn’t get the treatment it deserves. Finally, the only voice acting you’ll be hearing is Klonoa’s famous, “Wahoo!”

Klonoa 2: Dream Champ Tournament takes about 10 hours to finish, but that time can be shaved considerably if you’re skilled and/or don’t care about finding all of the collectables. Finishing the game lets you check out the extra stages that were unlocked from the Sun Stones. Aside from that, there is little reason to replay the game after you’ve done everything available. Still, there is a lot of challenging content in this Game Boy Advance adventure. Check out Klonoa 2: Dream Champ Tournament for more floppy-eared action and a challenge that comes as a welcomed surprise.

Overall, 7.5/10: If you wanted more after Klonoa: Empire of Dreams, then Klonoa 2: Dream Champ Tournament is highly recommended.