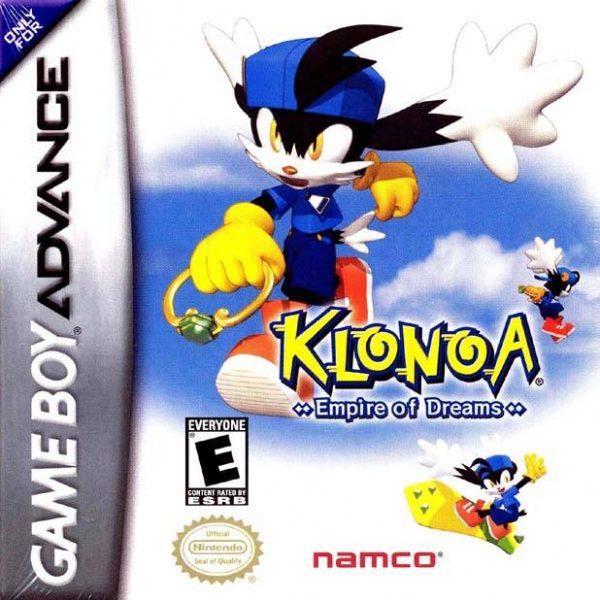 In 2005, I played my first Klonoa title. Klonoa 2: Lunatea’s Veil was a game that I didn’t give a fair chance. Instead of enjoying it, I wanted to rush through it so I could play other titles. Looking back on the experience, I have to say that rushing through that game was a bad move. Klonoa is a great character and his 2.5D side scrolling adventures are just as fun as those found from other mascots. Recently, I finished another adventure of featuring the floppy eared hero. Klonoa: Empire of Dreams properly utilizes the Game Boy Advance in a fun and clever side scroller that has lots of heart and personality. Fans of side scrolling titles that feature some surprisingly tricky puzzles will surely enjoy this title. My biggest problem with it is that it ends abruptly. From now on, I’ll think twice before attempting to rush through a game for a first time.

Like other games in the series, Klonoa: Empire of Dreams stars the titular hero and his friend Huepow. The two buddies find themselves in a setting where the dreams of its inhabitants are in danger. This time, they are in the Empire of Jillius, a kingdom that forbids its people from having dreams. Klonoa, a natural dreamer, gets thrown into prison for his crime of dreaming. Why? I’m glad you asked. You see, Emperor Jillius has been suffering from insomnia and is unable to dream. If he can’t dream, then no one can. Luckily, Klonoa gets a pardon from captivity and sets off a new adventure to discover the truth behind the Empire of Jillius and its leaders unfortunate ailment. Obviously, this is a light hearted tale that fits the Klonoa world. Being the dream traveler that he is, Klonoa’s quest involves meeting colorful characters that need his assistance. Empire of Dreams won’t go down in history as having the most memorable story, but for what it offers it provides a nice look at Klonoa as more than just a voiceless mascot.

Klonoa’s debut on the Game Boy Advance has the look of a classic game. I highly recommend playing Empire of Dreams on a Game Boy Advance SP instead of the original Game Boy Advance. The game’s graphics are nicely detailed; they have the cartoony and colorful look that Klonoa is known for. It’s a shame that they appear slightly darker than intended unless you play on the SP model. Klonoa and the enemies he faces move well and are just the right size. Bosses usually take up half of the screen. This makes the too few boss battles all the more exciting. The music in Empire of Dreams is surprisingly listenable. Most games on the GBA lack decent sound quality, but the poppy tunes that come with each stage fit the mood of the game. Klonoa’s token “wahoo!” sounds just as crisp as it did on the consoles.

Klonoa’s adventure in Empire of Dreams spans five worlds. Most levels require you to find three star medals. Once you have all three, you can open the door to the exit and move on. To do so, you will need to jump, glide, remove enemies and unlock doors. Klonoa isn’t much of a jumper, but he can glide with his ears by after pressing and holding the jump button. His wind bullet ability is back and allows him to grab enemies for projectile use or for adding an extra boost to his jump. The controls are simple to learn and each world usually introduces a new enemy or obstacle that Klonoa needs to use to get to next level. The first few worlds are simple. However, there are some really tricky puzzles that show up in later levels and provide a surprising challenge. Each level is different from the last and has plenty of other objects for Klonoa to collect such as gems and extra lives.

Each world contains one level in which Klonoa rides a hover board. These are a nice diversion and can be exceptionally challenging for people that wish to collect everything. Similarly, each world has a stage that is auto scrolling. These are just as challenging as the hover board levels and again, provide a nice diversion. Boss battles require you to aim for an enemy’s weak point. With only three hits until Klonoa loses a life and some relentless enemies, Empire of Dreams is more challenging than expected. That said, it’s still a simple game that gamers of any skill level can pick up and enjoy. Its biggest issue is that it’s over too soon.

Despite its five worlds, Klonoa: Empire of Dreams is over before you can say, “wahoo!” It can take seasoned gamers only three to five hours to get to the end. There aren’t any unlockable secrets and with only one extra stage to challenge, the replay value is severely lacking. Despite this major shortcoming, it’s still a fun little portable that does justice to both the Klonoa franchise and the Game Boy Advance. If you enjoyed playing as Klonoa on the television, chances are you’ll enjoy playing as him on a smaller screen.

Overall, 6.5/10: The floppy eared mascot’s foray into the world of the Game Boy Advance offers a fun but hurried adventure that will give gamers of all ages and skill levels something to enjoy.