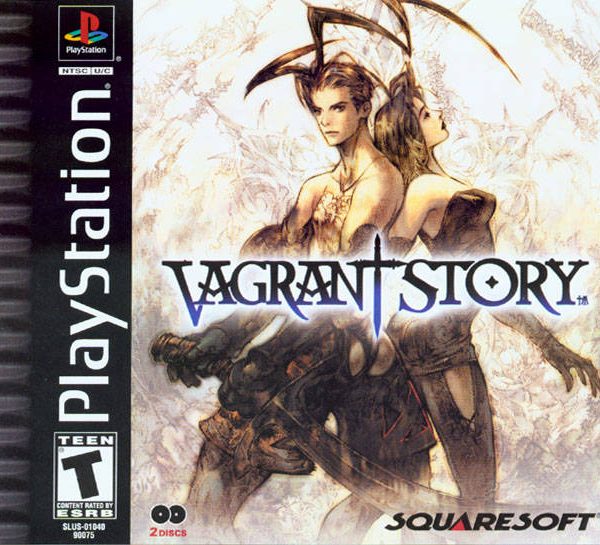 One of my favorite games of all time is Final Fantasy Tactics. I could list the many reasons why this is so, but I’ll spare you (and stay on topic) and mention just one of the reasons: the world of Ivalice. Ivalice is an interesting world with conspiracy, dark dealings, shady operations and a few heroes who try to right the wrongs. Unfortunately, this Ivalice didn’t transcend to other Final Fantasy titles. In lieu of the bleak and drab world, the creators at Square Enix decided to make Ivalice a happy place where you could watch moogles and lizardmen frolic about, or take a stroll through a charming villa and marvel at the verdant scenery. While the Ivalice most of us know and love is no more, gamers who have seen it all in Final Fantasy Tactics can get more of this mysterious world in a unique game called Vagrant Story. While the creators of Final Fantasy Tactics played a major role in the development of this title, it is 180 degrees from a strategy game. Vagrant Story is an action/RPG with a steep learning curve and an unforgiveable difficulty. However, those who stick with it will enjoy an amazing story with characters to match, and get to experience Ivalice the way it should be.

As mentioned, the game takes place in the world of Ivalice. In the kingdom of Valendia, the entire monarchy is an unproar after a failed assassination attempt on Duke Bardoba. The mastermind behind this crime is Sydney Losstarot, the leader of the apocalyptic cult called Mullenkamp. Sources say that Sydney and his cohorts were last seen near the forgotten city of Lea Monde. Once a prosperous city, a series of natural disasters wiped out the population and ruined the architecture of Lea Monde. A member of the Valendia Knights of the Peace (VKP) named Ashley Riot has traveled to Lea Monde to discover the whereabouts of Sydney. Ashley is ranked as a Riskbreaker, which means he gets the most dangerous missions from the VKP. After the loss of Ashley’s family, he works solo to take on as many dangerous missions as possible. Ashley is about to uncover many secrets about Lea Monde, but he’ll also encounter many secrets about himself in this dark and gripping game.

Two of the game’s selling points are the story and characters. Ashley is a troubled soul whom players will enjoy watching grow. Beyond that, you’ll meet some ferocious villains, and a cast of well-crafted supporting characters. The deeper Ashley ventures to Lea Monde, the more mysterious and captivating the story becomes. The ending will leave a bit to be desired, but reaching the ending is a wild ride. Most gamers will have an issue getting to the end without a bit of help, though. Vagrant Story is a difficult game.

Players will take of control Ashley, who is a capable warrior that happens to be trapped in a game where everyone is trying to kill him fast and hard. He is a master of various weapons, can learn magic once he uses a Grimoire, and can jump a fair distance to reach ledges. Combat in Vagrant Story uses some unique features that are often found in dungeon crawlers, but also throws in bountiful creativity to keep each fight exciting. Each weapon that Ashley uses has an attack sphere that indicates its range. A giant, two-handed ax will have a larger sphere than a dagger or club, for example. Pressing the O button will let him draw his weapons, which he can walk around with. However, when his weapons are in his hands, he can’t grab ledges. Pressing the O button again will show the attack sphere. Finally, hitting the O button a third time will let him attack a target if one is in range. Most enemies have different body parts that can be targeted. For instance, attacking a foe’s legs will generally cause their agility to go down. The introduction sequences give you a bit of understanding on what to expect regarding combat.

However, it’s just the tip of the iceberg. After a certain point, Ashley will recall Chain Arts and Defense Arts from his suppressed memory. Defense Arts allow Ashley to reflect damage, absorb elements, or prevent certain status ailments. Using them requires very, VERY precise timing. Chain Arts require similar timing, but allow Ashley to continuously attack until you mess up the timing. Chain Arts can be used to add extra damage, recover some energy, or lower a foe’s MP. There are multiple Chain and Defense Arts available, and Ashley can equip three of each to the O, triangle and square buttons. In order to successfully defeat foes, you need to master these abilities and their strict timing. Defense Arts are crucial to Ashley’s ability to survive, and landing the strict timing for Chain Arts will give you a better chance to kill a foe before it can kill you.

Still, there’s much more to it. There are so many things you’ll need to take into account before hacking a foe to bits. The first are the Risk Points. As you successfully land attacks, Ashley’s Risk will go up. The higher it gets, the lower the percentage of him landing an attack, but also there is higher damage output. Risk will lower on its own or with the aid of items, and it’s generally a good idea to keep it as low as possible. The other important thing to keep in mind is weapon type and enemy type. A piercing rapier will do nothing against a rock hard golem, but it will do wonders against the undead. As weapons are used, their affinities go up for the various enemy types, allowing you to create a set of weapons suited for each type of foe. Ashley has the ability to assemble, disassemble and customize a slew of weapons when he’s in a workshop. This adds an entirely new level of customization to the game and gives players endless options for creating not only weapons, but armor and shields as well. Inventory space is severely limited, so players need to carefully pick what gear stays and what gear gets left in the storage container. They also need to keep track of the weapon’s durability and Phantom Points. With all of these complex features with weaponry, magic is a saving grace for Ashley. Besides the ability to heal, he can enhance his gear and himself, plus cast powerful attack magic. Ashley can also learn Break Arts. At the cost of some hit points, Ashley will perform a devastating move on a foe with a weapon that has gotten thorough use. In the end, Vagrant Story makes you think and calculate before rushing into a battle. Chances are, you’ll see your weapon only do a few points of damage unless you take the proper steps to enhance it with both the workshop and with magic. It’s a very methodical game that requires planning, but it’s as fast-paced and action oriented as most adventure games go when combat takes place. The further in the game you get, the more imperative it is to make sure your weapons and armor are the best of the best, and the more imperative it is to make sure your timing skills are spot on.

Phew! That’s a lot to take in, eh? Like I said, Vagrant Story is not an easy game. However, it’s very easy on the eyes. Much of the architecture of Lea Monde is inspired by France’s Saint-Emilion, and for those of you who do your research, you’ll learn that a group of the developers (including head designer Yasumi Matsuno) went to France to get an idea of how to design Lea Monde. As you rotate your 360 degree camera, you’ll see that Vagrant Story can stand with the games of current generation systems. Lea Monde is dismal, dark and no detail was left behind in making sure that it made Ashley feel unwelcome. The character graphics look wonderful as well, despite some questionable outfits and hair styles. Seriously, Ashley is an awesome hero, but someone needs to cut those three strands of hair that look like antennae. One of the game’s best features are the monsters. Palette swaps are nowhere to be found, even if monsters are of the same species. Ashley will encounter some hideous foes, like a harpy that has a woman’s face on its belly and Liches that wear skulls for accessories. Square knows how to make a gorgeous game, but Vagrant Story allowed them to show their creative side and make a game that looks gorgeous as well as original. Along with this unique design comes a splendid soundtrack to set the mood for the adventure. One of my favorite composers, Hitoshi Sakimoto, delivered an epic set of songs for Vagrant Story. Fans of his will no doubt catch onto his style, but they’ll also notice how much more dark and serious the tunes sound. This is some of his best work, bottom line.

Despite the grueling nature of it, Vagrant Story will only take about 20 hours to complete. Luckily, you can carry over all of your gear, stats and items in a New Game Plus. Furthermore, you can reach new rooms and treasures that you couldn’t before. While the story will remained unchanged, there are little things to collect like titles and the best equipment. The best part of the New Game Plus is that it makes the quest much shorter so you can get to the wonderful story bits quicker. Initially, there were times I wanted to throw my controller through the television so hard, it would go through the wall and into the neighbors apartment. Vagrant Story can be a frustating game, but when you take your time and learn the complex systems, you’ll be in for an amazing story, unique game mechanics, a breathtaking setting and a memorable collection of music. Vagrant Story is one of a kind, and despite it being over a decade old, you should not miss out on this adventure.