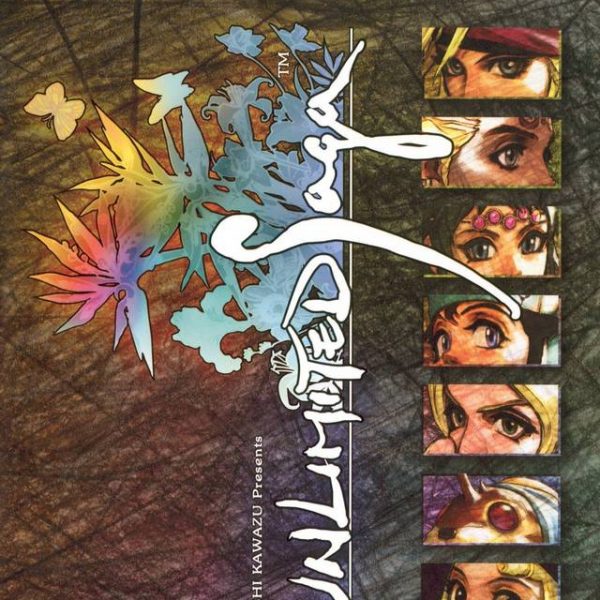 The afternoon of June 17th, 2003 was sunny and clear. For some it was just another springtime day. For me, it was a day I had marked on my calendar for months. It was the day the ninth entry in the SaGa series was getting released in the United States. I remember clocking out of my part-time job and driving to the game store to pick up Unlimited Saga as a belated birthday present. I was so stoked at the notion of a new SaGa entry. Heck, I read the manual cover to cover in the parking lot. I sped home and popped in the disc. I was entranced by the beautiful opening movie. I started the game as Judy and muddled my way through her adventure until the final dungeon. And…most of you reading this probably had some idea as to what happened. The tl;dr version can be summed in one word: disaster.

At the time of its release, Unlimited Saga had little resources. Understanding the ins and outs of Unlimited Saga took hours. Perhaps the most upsetting thing was that the game wasn’t enjoyable even after you understood the game’s functionality. Unlimited Saga has layers of problems, but there’s a strange draw to it. I made multiple attempts in going through it that all ended in frustration. After nearly 20 years, I finally finished the game. There’s even a tiny of desire for another playthrough. Other gamers might have some morbid curiosity for it. Here’s a retrospective, as well as some hints and tips for those brave enough (and perhaps foolish enough) to check out Unlimited Saga.

A lot of Unlimited Saga’s inspiration comes from tabletop RPGs. Imagine playing Dungeons and Dragons, but with a dungeon master that really has it out for you. The DM will give you a lot of options but zero guidance on how to handle any of them. Along with a bevy of possible side-quests, the DM will throw treasure chests, traps, secret doors, obstacles and more your way. Nine times out of ten, interacting with those usually results in your team taking damage. You’ll watch your character’s energy drain before your eyes with nary a monster in sight.

Of course, random encounters are a thing. It’s hard to compare the game’s combat to anything because I still haven’t seen anything like it after all these years. But, in true tabletop RPG fashion, encounters are difficult. Your team will take five actions. The goal is to get your enemies’ Life Points, not Hit Points, to zero. HP only serves as a shield to LP. The odds are stacked against you with this task: most actions consume HP, weapons have durability, enemies will attack out of turn, and the only real way to deal proper damage is through a combo. Combos can be interrupted by enemies. In or out of combat, Unlimited Saga is brutal.

So, what’s the appeal? It’s hard to explain why Unlimited Saga has garnered a cult following here in the states. It’s a difficult RPG even when things click. The game’s instruction manual provides some basic how-tos but words on paper can only do so much. There are no in-game tutorials, either. I think the game’s appeal is twofold. There are some gamers that yearn for the challenge of old-school RPGs that don’t hold your hand; allowing you to trudge through the challenges on your own. On the other hand, there are some gamers that revel in unique experiences; Unlimited Saga does nothing by the book. Approaching Unlimited Saga from either of those mindsets could make the game more enjoyable. I’m still not sure what drew me back to the game after all this time but one thing’s for sure: actually beating it was a proud gaming moment.

Finally, here are some tips. They may not make the game any less of a struggle, but they may alleviate some confusion.

2. Spend as much money as you can in the shops. In doing so, every shop in every city you can access will continue to update their wares with new and (usually) better gear.

3. Embrace the game’s randomness. When you finish an adventure, the game “rewards” you with a growth panel. However, there’s no rhyme or reason as to why characters get certain panels at the end of a mission, nor is there anyway to really plan a character’s build. So, you’ll have to see what the game throws at you and adjust accordingly. That being said…

4. Try to have at least one character master axes and one character master spears. Axes that have the Time Lapse skill will allow you to spark the Reverse Delta skill. This is an amazingly powerful attack that really cuts into enemy HP. Spears that have the Aim skill will allow you to spark the Acupuncture skill. This is an excellent skill that cuts through the HP barrier.

5. Try to make Damascus as soon as possible at the blacksmith. With it, you can use it to make any type of Damascus weapon or armor. Damascus is a powerful material; arguably the best one for end game gear. There are plenty of resources out there for the recipe that are beyond the scope of this write-up.

6. Going back to the idea of randomness, there are random traps everywhere. Landing on a safe spot on the trap’s reel has more to do with luck than timing. If the results aren’t favorable, try to shrug it off and move on.

7. Finally, don’t get intimidated by the battle wheel. Unlike the reel that pops up with traps and treasures, the battle wheel can be mastered with enough practice. Take your time and find a rhythm to land on the favorable spots.

Unlimited Saga is really like nothing you’ve played before. If you’re a new player, then understand that getting frustrated with it is a rite of passage. Don’t feel bad if you call it quits. If anything, you can enjoy the game’s lovely visuals and excellent music before you do. But, the interesting thing about Unlimited Saga is that once you’ve gotten a taste of it, then chances are you might be back for more sooner than you think.