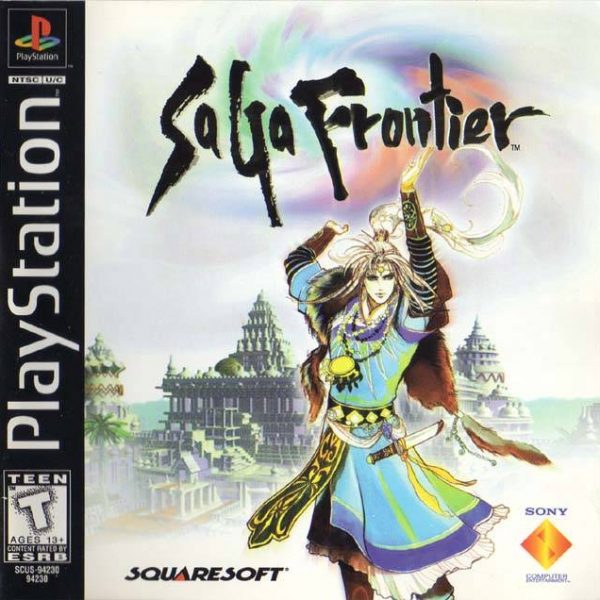 Author’s Note: This review was originally published on September 4th, 2003. Most reviews from around this time are packed with fanboy lingo and poor writing. This review is no different. However, SaGa Frontier is my favorite game of all time. I find it interesting that I’m still able to not only read , but also agree with this review.

The first time I played this game, I was really confused about it. I was used to playing linear games that tell you where to go and what to do. Some months later, I tried it again and really enjoyed it. Although it does have some faults, it still is an excellent game that I highly recommend to any RPG player looking for a fun challenge.

Story: 9/10
There are seven stories in SaGa Frontier: Riki, Lute, Red, Emelia, Blue, Asellus, and T260G. Each one is unique, but still takes place in the same world. However, not each persron has access to certain regions, which makes the game interesting. While some of them are deep, others are very bland and simple. Asellus’ quest is one for self identity, and explains a lot of things. When playing as Lute, however, you’ll know who the last boss is from the start because…you go straight to the last boss if you’re not careful. All of them are different in their own way, but they all can get pretty repetitive as well. What I didn’t like most was that many of the stories didn’t go as deep as they should have. There were a lot of missed opportunities for some depth. Still, the stories are all fun and interesting.

Gameplay: 9/10
No matter who you pick, you do pretty much the same thing: Travel around places and build up your stats. Depending on your character, different places advance your story. This may seem confusing at first, but after you get into a swing of things, you’ll understand how to deal with the game. There are TONS of regions to explore, and you go there simply by hopping on a ship. Many people will be overwhelmed by the large amount of regions to go to, but as I said, you’ll end up figuring out how to play the game smoothly. While you travel, you have the opportunity to acquire new magic gifts, buy tons of new weapons and armor, go to dungeons, recruit characters, and gather information. There are four types of characters to recruit: Humans, Mystic, Monster, and Mecs. Humans can equip items normally, Monsters can only equip accessories, Mecs can equip anything to make them stronger, and Mystics can equip four items. All have strengths and weaknesses. Once you learn where everything is in the world, you’ll be having a ton of fun doing all of the above mentioned things. I really enjoyed playing this game, especially after I realized what to do. As I said, it does have a slight learning curve, but if you stick with it you’ll start loving it.

Battles: 10/10
You engage in a battle by walking into an enemy. Once you win that battle, the enemy is gone. However, if you leave the area, the enemy will come back. This makes training a breeze. When you begin a battle, you choose how you want to position your characters. Usually, it makes no difference how you go about doing this. Your characters (five at most at a time) will jump in and then you choose each person’s action. There are many things you can do in battle. First off, there are a ton of skills that can be learned and used. Humans gain skills by using a weapon over and over. As you get stronger, you get stronger skills by using older skills. Skills cost WP (weapon points), but after a certain point…you’ll have plenty of WP. Magic users are similar, but they learn magic at the end of the battle if they have the gift (which is acquired by performing various tasks). There are tons of types of magic spells (which cost JP), such as Light, Mirage, Time, Realm…many fun and unique types. Monsters get stronger by defeating a monster more powerful than it. Mystics actually absorb monsters and their abilities when they attack them with their Mystic glove, sword, or boot. However, they can’t use skills like Humans can. Mecs get new skills by defeating other robots, and then reading their data at the end of the battle. Humans at the end of battle get stat up bonuses. For instance, they might get an increase in HP, QUICKness, CHARM, and WP. The next battle may be different. The battles are always fun and exciting, especially when new skills are learned. There are a ton of skills for the fists, swords, and guns. Magic is plentiful too. Mystics, Monsters, and Mecs have tons of options open for them when it comes to customization. There are tons of characters to recruit, making each adventure great when it comes to finding your favorite party. Sure, after a while the battles can get repetitive, but overall they’re a lot of fun.

Characters: 7/10
Character development is sort of lacking. However, many of the characters leave it up to you to figure what exactly happened. For once, you’re going to have to use your imagination in discovering each person’s motivation. This isn’t as true so much with the main characters, but with the supporting characters it is quite fun to figure out what happened to them.

Graphics: 8/10
The backgrounds are simply gorgeous, using the PS power to it’s fullest. The spells and skills are all very cool, and make you feel bad for your foes as they get hit by them. The characters and monsters don’t look so red hot. The character designs look like 3D version of Chrono Trigger sprites. It looks somewhat odd. Many of the monsters look like clay pieces, and have really stupid motions. There are no cinematics, but there are few fun little cut scenes here and there. This game really isn’t about it’s graphics…but they still get the job done.

Music and Sound: 10/10
This is the one game that I actually hunted down the OST for. Yeah, the tracks are that good. The music isn’t orchestrated, but the type of sounds they use is really great. Each song is fitting for the area you’re in. The battle tracks are especially my favorite. Great music for a great game. Fitting, eh?

The sounds are also nice. They aren’t annoying or quirky, and sound just like they should. Nothing bad at all.

Replay Value: 10/10
There are seven quests to complete. Each one can last as long as you choose, so you have to realize that you’ll be playing this game over and over. And, you can play each game however you want. You can master swords one game, then play again mastering magic. Or become an expert in both fields. Or you can try a party of only Mecs! SaGa Frontier is full or replay value.

Difficulty: Hard
The biggest challenge in this game is the learning curve. It will take a while, and I can’t stress that enough. The other challenge comes from the game being difficult in battles. As you get stronger, so do the monsters and it could cause some trouble if you’re not prepared. It can be challenging but it is also rewarding, especially after you finish all seven characters.

Buy or Rent: Rent
I bought the game after I learned how fun it could be. But, most people aren’t going to have the patience to deal with this game. This is why I say rent. Only if you give it a chance you can experience the greatness of SaGa Frontier.

Overall, I really enjoyed this game. It’s new and fun, and full of that classic Square feeling. I highly recommend it, even at this day and age.