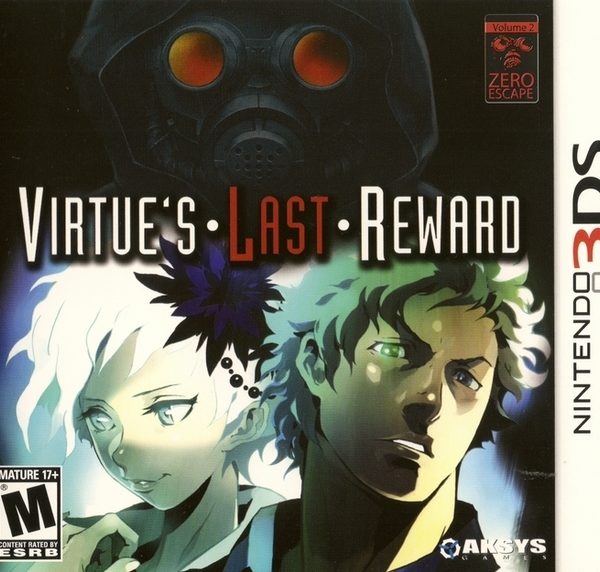 When my copy of Zero Escape: Virtue’s Last Reward arrived, I was ready for action. I strapped on my pre-order bonus watch (that will not be sold on eBay. If you did that, shame on you and shame on your status as a gamer) and I laid out my gaming snacks and gaming drinks accordingly for long gaming sessions. I got my stylus ready and I turned on my puzzle solving brain. The screen got a fresh polishing and the batteries got a full charge. All of this preparation was well worth it because VLR is the perfect sequel to the magnificent Nine Hours, Nine Persons, Nine Doors. Using the technology of next-gen portables and the story-telling and puzzle solving of the prequel, I can’t think of a better way to continue Zero’s saga.

In lieu of the motion sickness causing barge seen in the first game, VLR begins in a giant (and dryer) warehouse with robot voices and colored doors of doom. You take control of Sigma, your average college student who has been captured by Zero. Sigma and eight other strangers have been taken to this unknown location to participate in the Nonary Game. You remember the Nonary Game, right? It involves nine players and the goal is to open a door marked with the number nine using their computer programmed bracelets. If they succeed, they can get out of there. If they lose or break the rules, they die. In 999, a bomb was set off in their stomach caused by the bracelet. In VLR, needles in the bracelets will eject and discharge two drugs. The first is a muscle relaxant and the second is a poison. Needless to say, Zero is back and means business. But why? Who are all of these strangers? A new crisis full of secrets and deceptions is about to begin.

The premise of VLR sounds similar to 999. However, there are some apparent differences at first. As mentioned above, instead of numbered doors, the doors are colored. The bracelets are also colored and have one of two words attached to them: pair or solo. Pairs and solos need to combine their colors to enter certain doors. This gives Sigma a variety of choices for proceeding with the story, which ultimately determines how it ends. Just like 999, there are a variety of endings, some good and some not so good. This time, there are over 20 endings that you can see. You need to witness as many endings as possible in order to unlock the true ending. One of the great things about VLR is that you can hop from story node to story node in order to skip certain parts. This major convenience makes finding all of the secrets that much easier, and that much more fun. As expected, the story and characters are wonderful. The addictive story is easily the best part of the game. Aksys, as usual, did an amazing job in translating the superb characters that you’ll grow to love and hate all at once.

And, much like the predecessor, VLR contains a variety of unique puzzle rooms. As the story progresses, you’ll have to seek certain items in these rooms. In order to crack the codes on the safes that have them, you’ll be tasked with solving puzzles that will test your sleuthing brain. The first couple of puzzle rooms are relatively straightforward, with shape matching, a few bits of item combining and word scrambling. However, as you delve further and further into Zero’s game, the puzzles get much more tricky. They can include mathematics, random number generating or even biology. Most of the rooms contain a mini-game that will need to be solved to unlock more items and clues. Indeed, the puzzles are very fun and a perfect way to break the drama and conversation that happens during the story. The best part about them is that there are two modes for each room: Hard and Easy. The game defaults you to Hard mode, which means your teammates will only give you a few hints in solving the problem. Once you switch to Easy, there is no going back. Your teammates will offer a few more hints, but you’re locked out of obtaining something called a Gold File. Gold Files contain information revealed to you in the story, put together in a nice, neat package. All in all, VLR’s puzzles are wonderful for even the most seasoned problem solver. One of the greatest things about them is that you have a memo pad and all of your files a button push or stylus tap away in case you need them.

If that wasn’t enough to convince you, then maybe the new look for the series will be enough. Whether you own a 3DS or a Vita (and if you own the latter, all I can say to you now is….HAHAHAHAHAHAHA!!) you’ll notice a huge difference in presentation from the DS’ 999. The multiple puzzle rooms and environments look much more realistic, especially when you look at the little details each area has. The characters are a unique mix of realism, anime and CG. The best comparison I can think of is this: if you played SaGa Frontier, you’ll remember that certain cut-scenes show the characters in a style that looks similar to old-school computer imaging. That’s how the majority of the characters look in VLR, only with more polish and much more animation. If you don’t get the idea, then just look at some screen shots. Either way, the style is great, and also not recommended for those who get queasy because there is blood-a-plenty in VLR. The game is fully voiced, and you can pick either English or Japanese every time you start the game up from saved data. No matter the choice, the emotions, charisma, feelings and energy portrayed by each character is solid and well-acted. Chances are you’ll recognize a few of the talented folks who lent their voices. This is a huge improvement from 999. With a copious amount of dialogue, it really helps to actually hear the characters instead of blips at different pitches. The only downside to all of this is that Sigma, the main character, barely gets any face time and he gets zero voice time. While he has plenty to say, he is sans voice. Furthermore, there is no voice acting in the puzzle rooms.

I have one more flaw to point out that had a tendency to annoy me. During certain parts of the story, a map will appear. The map will then have a little blip go down a path to another room. Once it reaches the room, it will “ding” a few times. This happens quite frequently. What is all this, you ask? It’s a representation of your characters moving from one location to the next. They could have easily nixed this, or at least given an option to skip it. Still, if these are the only flaw VLR has, then it just goes to show you that this is an excellent game worth playing. I highly recommend playing through 999 first, though. It will make a lot more sense and certain characters will have more meaning when you see their roles in VLR. When all is said and done, Zero Escape: Virtue’s Last Reward is a solid experience that will cater to a variety of fans. Those who enjoy a good mystery, those who enjoy excellent writing and characters and those who want plenty of mileage from a new game will be happy that VLR has all of that, and then some. Sure, it would have been nice to be able to fast-forward through a few things, and not being able to see much of Sigma takes away from his personality, but overall I am a satisfied customer. The Nonary Game is awaiting you once again, so be sure to pick up Zero Escape: Virtue’s Last Reward as soon as you see it.