Lufia II is one of the best games I have ever played. 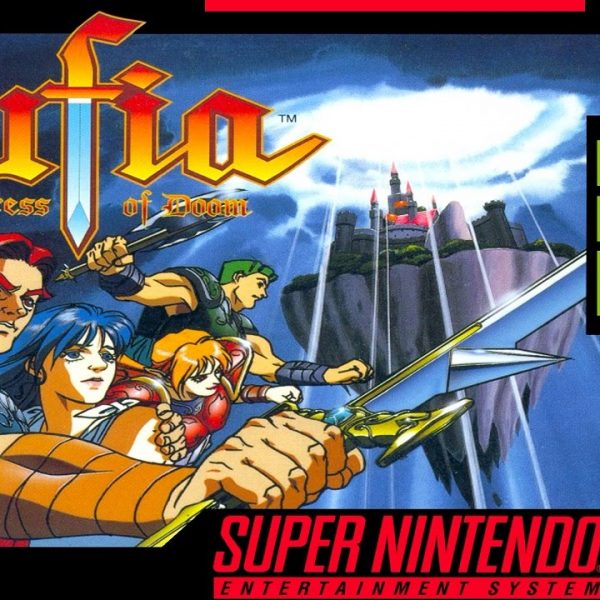 Despite playing hundreds of RPGs, one series has been under my radar for years. I would hear and read snippets of information about Lufia (known as Estopolis in Japan) from various sources, but I never had any exposure in actually -playing- them. Thanks to a dear friend of mine on GameFAQs, my interest in the series has been renewed. I recently had the chance to finish the first entry in the series. Lufia & the Fortress of Doom is classic role-playing to the letter. I could kick myself for putting off this series for so long because if the rest of the games are anything like the first, then I’m excited to see what happens with each entry. Sure, Fortress of Doom is a product of its time and suffers from some issues that have been improved upon in modern RPGs, but this is still a good game worth checking out. I especially recommend it to fans of old-school RPGs and/or new fans to the genre.

The introduction to Fortress of Doom takes a unique approach. Players start with four legendary heroes facing off against a group of evil beings called the Sinistrals. The heroes are Maxim, Selan, Guy and Artea. After an impressive skirmish, we are taken to the present day 99 years later where we meet our hero of the game that you name yourself. This hero is said to be a descendant of Maxim. In the village of Alekia, he and his friend Lufia live an uneventful existence until rumors of monsters running amok start spreading. The hero departs for a nearby town to learn more, but what he encounters will be much more than expected. Not only are the Sinistrals starting to resurrect, but the truth about Lufia will come to light. The story combines classic world-building, character development and plot progression in a way that I miss. RPGs from this era got you hooked to the story and characters from the start and progressed in a linear manner. Fortress of Doom is no different. While there are some parts of the progression that act as filler, most of the game has you going from Point A to Point B and revealing important plot information along the way. The truth about the Sinistrals and Lufia might not be as epic as more modern RPGs, but plenty of soul was put into developing Fortress of Doom and it shows in the writing. The hero, Lufia, the mighty Aguro and the lovely Jerin are a likeable bunch.

Fortress of Doom’s classic story compliments the simple game play. The hero and his crew will travel to towns and dungeons, both of which offer something to do. The towns have plenty of chatty locals, hidden items to find and shops. Money is never a problem in Fortress of Doom, so having the latest gear for your party of four is not an issue. You can also pick up plenty of restorative items and still have excess spending money. After speaking with the right NPC, your directive will be given and you will likely proceed to the world map, and then to a dungeon. One thing I dislike about these areas of exploration is that characters are forced to walk, whereas in the towns they move at a brisker pace. That complaint aside, dungeons are one of my favorite aspects of the game. Like the rest of the game, they are simple by design. However, they are full of treasure chests. The main reason I enjoy heading into a dungeon is because I know that there will be a fresh batch of treasures available. I know that treasure chests in dungeons are a staple, but for some reason the sheer magnitude of them in Fortress of Doom gives a good sense of nostalgia and joy. Start playing it and chances are you will see what I mean.

The treasure aren’t the only things in dungeons, though. Battles in Fortress of Doom occur randomly. Sometimes, they can occur every two to three steps. It can get irritating in the larger areas, but the battles are usually over in a few seconds. The turn-based battle system is all too familiar for most people. None of the game’s many enemies or bosses are too tricky thanks to all of the characters having access to a variety of weapons, magic and items. After selecting an action, the participant with the highest agility setting will act first. And…that’s about it. Most encounters in Fortress of Doom are quick and painless. The hero isn’t by himself for long, so there is not much of a need to grind for levels. Speaking of which, when the characters level up, there is a chance they will learn new magic spells.

Speaking of which (again), these are entertaining to watch. Fortress of Doom isn’t as shiny as something like Romancing SaGa 3 or Kirby Super Star, but it still has plenty of personality. The colorful, crisp sprites do a good job at portraying the right amount of emotion and character. The world of Fortress of Doom has the look of most RPGs of the era, but there is still variety in the various caves, towns, and towers. Heck, at one point in the game you could be on a floating island or under the ocean. One of the great things about the look is that the text is large and easy to read. When the damage number gets displayed or the characters are neck deep in a conversation, the displayed text will pop. The music in Fortress of Doom is catchy as hell. The hour or so long soundtrack is worth hunting down because nearly every track will have you tapping your fingers or feet to the music. The theme that plays in the world map is easily my favorite, but the OST deserves a listen.

Lufia & the Fortress of Doom is a short RPG. A lack of secrets and side-quests makes the total run time around 20 to 30 hours. This time might be unintentionally increased due to some parts of the game lacking direction in order to proceed, but instances like this are rare. However, there is one nifty feature: finishing the game unlocks Try Again Mode, which will increase the amount of gold and experience dropped by enemies. This is perfect for those that wish to blaze through the game again and enjoy the story. Despite the high encounter rate and inconsistent walking speed, the first entry in the Lufia series has left me with a satisfied feeling. Games like this serve as reminders as to why I enjoy the RPG genre so much. Sure, this is a modest RPG that had to compete with the likes of Squaresoft’s juggernauts at the time, but I have no trouble recommending it to RPG fans of all experience levels. Those who dove into the genre long ago will enjoy the unpretentious nature whereas those that are newer to the genre will have an idea of what to expect after they finish.