One of the best games I have ever played. 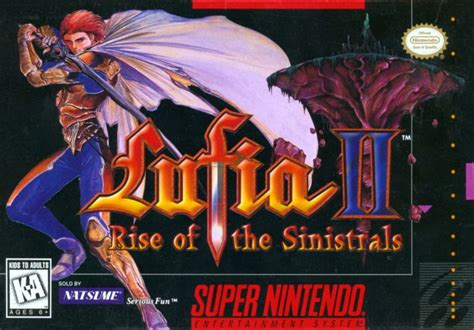 Lufia & the Fortress of Doom was a basic RPG that reeked of 1990s nostalgia in all ways possible, both good and bad. People interested in RPGs or those that wanted to reminisce about the good-old days would find the perfect solution in it. However, Fortress of Doom had some of the issues that could turn people away such as frequent random battles, long dungeons and slow walking speed. Nearly everyone will agree that Lufia II: Rise of the Sinistrals is a perfect example of how to create a sequel that builds on a solid foundation while making necessary improvements. This is one game that all RPG fans need to experience. There is so much to offer in Lufia II and, if not for some programming glitches, it would be a perfect ten.

If you played the first Lufia, you know about the initial sequences showing Maxim and his friends in an epic battle against four evil beings known as the Sinistrals. Lufia II shows you where all of this drama began. The game starts with an ominous scene in which the Sinistrals start to plot their world domination. In the small village of Elcid, players are introduced to Maxim. A prodigy with the sword and all around good person, Maxim meets a mysterious woman named Iris. She informs Maxim that he is destined to fight against a powerful evil. Answering the call of adventure, Maxim begins a journey that will impact the fate of the world. Most people probably know what’s going to happen to Maxim and his friends, but the plot in Lufia II is not only full of surprises, but it’s full of drama, humor, lore and fantasy. This is a game that was released in the United States in 1996, but the writing is some of the best I have ever seen. Each character Maxim meets has a unique personality and getting to know all of them will leave you wanting more exposition. It’s hard for me to choose a favorite character because all of them are so great. That says something about the game. Unfortunately, this same great story didn’t receive as much care as it should have in certain instances. Cringe worthy translation errors occur from time to time, but it doesn’t take away from the rest of the solid writing.

At a glance, Lufia II looks like it would play similarly to the first game. Your starting town of Elcid has shops, an inn, people to talk to and a cathedral that lets you save your progress, revive party members or remove a curse from a piece of equipment. Magic spells now have to be purchased and are not learned via leveling up. Purchasing new equipment is never an issue because money is never a problem. So, you might be wondering if anything substantial has actually changed. You’ll get your answer as soon as Maxim leaves Elcid. From the moment you step into the first dungeon, it’s apparent that things were positively changed. Not only does Maxim move at a brisk pace, but there are no more random encounters. Also, each dungeon is littered with puzzles that range from simple to brutal in terms of difficulty. As you get further in your journey, Maxim will get a tools to use that will help you solve these brain busters such as a flail, fire arrows and bombs. The best part of all is that dungeons aren’t nearly as long as they were in Fortress of Doom.

Battles in Lufia II are another area that got tweaked in all of the right places. They still use the classic, turn-based formula that was found in Fortress of Doom, but new features make them as fun and addictive as ever. Maxim’s party will be set depending on where you are in the story, but each party member has strengths and weaknesses that need to be properly used in combat. Maxim is a well-rounded character, Guy is a powerhouse that can’t use magic, Tia is a glass-cannon caster and so on. The feature that separates Lufia II apart from its predecessor and other games is the IP system. Along with HP and MP, characters will gain IP as they receive damage from enemies. IP lets them activate a skill attached to their equipment. Not only does this mean that characters can use powerful abilities that they would normally not have access to, but it means there is a new level of strategy available to players. Not all pieces of equipment will have an IP ability, so it’s up to you to decide whether or not to equip gear with better stats as a trade-off. As if that wasn’t enough, Maxim can find Capsule Monsters throughout the world. These AI-controlled creatures will fight alongside your party, can be fed items to grow in stats and appearance, and can help in making a battle finish sooner. Every aspect of Lufia II’s combat is wonderful and I never grow tired of entering a new dungeon and finding new foes. Boss battles deserve a special mention due to their sheer size and intimidating look.

This leads me to the graphics in Lufia II. The sprites used during exploration look about the same as they did in the first Lufia with slightly more detail. The new monster designs help differentiate it from Fortress of Doom, but the amazing spell effects and the character sprites that move with a surprising range of motion deserve the most praise. There are times you might mistake the 2D sprites for something on the Sega Saturn. The dungeons and towns retain a classic look, but there are certain areas and dungeons that have programming errors. One dungeon near the end of the game is an absolute mess that requires you to feel your way around the room in order to proceed with the story. That issue aside, Lufia II is one of the best looking games on the SNES. The soundtrack is epic; a huge step above Fortress of Doom. With more instrumentation used and more variety, there is always something enjoyable to listen to. The battle music that plays during one of the game’s many boss fights is magnificent and deserves a special mention.

Finishing Maxim’s adventure will take around 30 to 40 hours. In the event you just can’t get enough adventuring, Lufia II has a 99-floor, randomly generated dungeon called The Ancient Cave. No two journeys through this monstrosity will be the same but the rewards you find can make even the most terrifying of the Sinistrals turn into a weakling. You can also participate in a casino and/or upgrade all of your Capsule Monsters. Ultimately, this means that Lufia II can last you close to 100 hours. Lastly, I would like to conclude my 400th review with a shout-out to fellow GameFAQs.com user and all-around lovely person: Becca. Thanks to her kindness, I was able to play Lufia II: Rise of the Sinistrals and I enjoyed every minute of it. Hopefully, everyone reading this review will get the chance to find a copy and do the same.

Overall, 9/10: Lufia II: Rise of the Sinistrals has some glitches and translation errors that turn the game from a perfect ten to a 9/10. Yet, even with these shortcomings I recommend the game to all fans of RPGs no matter how much experience you have with the genre.