The best Tales of Phantasia port that will never get the localization it deserves.

Tales of Rebirth will never be played by those that would appreciate it the most. 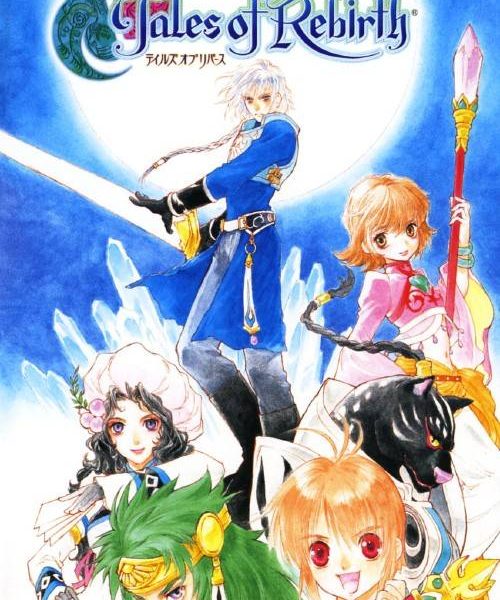 Author’s Note: This review was originally published on March 23rd, 2009. Thanks to a fantastic translation guide by lanyn, I was able to get through this game with little issue. Like other reviews of the time, this one features “witty” taglines for each section.

Imagine an RPG that has a beautifully told plot dealing with important issues like racism and acceptance of individuality. This plot revolves around well-developed characters that grow into likable entities. This RPG also shows off cutting-edge graphics and plays fantastic music. Finally, this RPG has an innovative, exciting battle system that challenges you to plan ahead and think on your toes. Oddly enough, such an RPG exists. The downside? This RPG never made to the USA. From the popular Tales franchise comes the Japan only RPG, Tales of Rebirth. This could very well be one of the best video games of all time and it is a crying shame that it will never be localized.

CLLAAAIIIRE!!!
In the Krageria Kingom, King Ladras performs a ritual that causes him to lose his life and for people around the world to unlock the power of Force. Veigue Lungberg ends up losing control after unleashing his latent Force of Ice, and ends up encasing his best friend, Claire Bennet, in a giant block of ice. One year later, Veigue is visited by two Force users. One is Mao, a young boy with the Force of Flame. The other is a Gajuma, a term used to describe beast-men, named Eugene Gallardo, who harnesses the Force of Steel. Thanks to their help, Claire is freed. Unfortunately, she is soon captured by a group of powerful Force users called The Royal Shield. Now, Veigue will set off on a journey with Mao and Eugene to save Claire.

From the moment the story began, I was hooked. I couldn’t help but to wonder why Claire was captured, why King Ladras unlocked the power of Force, and where Mao and Eugene originated. These questions and more get answered throughout the journey. Besides Mao and Eugene, Veigue is joined by other Force users. He will also encounter vile villains that will stop at nothing in ending Veigue’s quest early. All of the characters, hero, villain, and NPC alike, experience amazing development throughout the course of the game. In classic Tales fashion, relationships slowly develop throughout the party. When the game is at the end, Veigue is surrounded by loyal and trustworthy companions.

But, it should go without saying, that the entire game is played in Japanese. If you don’t understand the language, you will find yourself struggling. Luckily, this website has an EXCELLENT translation guide so you can understand all of the story and the mechanics of the game.

Picturesque Perfection.
Besides the gorgeous animated sequences, Tales of Rebirth sports amazing graphics. The 2D presentation is colorful, detailed, and exciting in and out of battle. For those of you who have played Tales of Destiny 2, you will see that the on-screen characters in the towns, dungeons, and world map are similar to one another. This was fine in ToD2, so seeing the look again was fine in ToR. However, the battles show characters with more realistic proportion, while still retaining that anime feel. Characters move with fluid like grace as they hack and slash well-designed enemies. Overall, the graphics were gorgeous.

Business As Usual.
As you travel from one gorgeous setting to another, you will often times find yourself in a new town. Towns are full of fun things to do. The cooking system is back, as are a bevy of side-quests. A new feature found only in Tales of Rebirth is the Enhance system. After a battle, you will earn Enhance Points. You can use these to upgrade the stats of your weapons and armor. After a certain amount of enhancing, your weapon will unlock a Latent Ability. Latent Abilities have a certain percentage of activating in battle. The percentage can be increased with the use of EP. For weapons, these abilities include stealing items, dealing twice the amount of damage, inflicting poison, etc. For armor, they include reduced time for a negative status, double the defense, and so on. Even better, you can combine your powerful, upgraded piece of equipment into a new piece of equipment to not only carry over increased stats, but potentially unlock new Latent Abilities. With enough money and time, you can increase the power of your attacks and your defences substantially.

Three For Me!
Obviously, the enhanced equipment gets put to good use in battles. Like the other Tales titles, Tales of Rebirth features a real-time battle system. However, the ToR system is called the Three-Line Linear Motion Battle System. Battles still take place in real time, but instead of all of the characters and enemies being on the same plane, there are three lines that both you and the enemy easily traverse. There are both good and bad parts to this system.

The good is that the battles are always exciting. You control a character and attempt to chain attacks together for a high combo count. Each character is unique, so it is easy for you to find a character suited to your style of fighting. Also, there are no magic points in this game. Instead, you have the Force Cube. In battle you will notice a diamond with four smaller diamonds in it. These represent the up, down, left and right directions. Like most Tales games, you can assign skills to the corresponding directions. After you use a skill, the green diamond vanishes. While you can use that skill again, the damage will be laughable. Thus, it is important to strategize how often you use skills. Another feature is the Rush Gauge. As you give and take damage, this gauge will increase. The plus side to this is that you will deal more damage, and you can activate Ougis. The downside is that your HP Regeneration ability attached to your armor is reduced drastically. Seeing as there is only one healing spell in the game, you have to plan and strategize how to use the Rush Gauge. Finally, Latent Abilities build up a hidden meter in battle. When this meter is full and other conditions are met, you can activate impressive, flashy, and fun Hi-Ougis.

While the battles are always exciting, they can also be difficult. Certain enemies have a tendency to gain up on your weakest character. Also, enemies love to guard and counter attack. Thus, rushing into battle with your sword-a-swinging is a sure fire way to get knocked back. Unfortunately, due to the nature of the three line system, getting behind an enemy is tricky.

Luckily, the good stuff outweighs the bad, and the battles end up being very, very fun. When a battle is over, you get money, experience, EP, and GRADE. Again, the GRADE shop is available for you after the game is completed. The exciting, three-line system makes trekking through dungeons always fun.

Shout. Shout. Let It All Out.
Like most Tales games, there is excellent voice acting. Since ToR has more of a serious, emotionally driven story, there is plenty of shouting. In and out of battle, a minute rarely goes by without someone going a bit over the top and shouting their lungs out. Besides the good voice-work, the music is top-notch. In fact, Tales of Rebirth has one of my favorite battle themes in any video game. This is clearly some of Sakuraba’s finest work.

Rebirth and Replay.
The main quest takes about 50 hours to complete, and the side quests can easily tack on another 30 hours. There is lots of stuff to do when you are not saving the world. When the game is over, the GRADE shop opens up, allowing you to customize your second play. Overall, Tales of Rebirth is an excellent title. Of all the Tales games to never have been released here in the United States, this one may be the biggest tragedy. While I still like Tales of Destiny 2 the best, I think Tales of Rebirth would have been an excellent title over here. One cannot help but wonder the reason why we never received this. Maybe we couldn’t acquire the rights from Japan, maybe we were told that the original Japanese source code couldn’t be localized, maybe there was low projected US retail support. Regardless, the reason will be a mystery. I know that playing a game with a script translation sounds unappealing, but Tales of Rebirth is a worthwhile RPG experience.