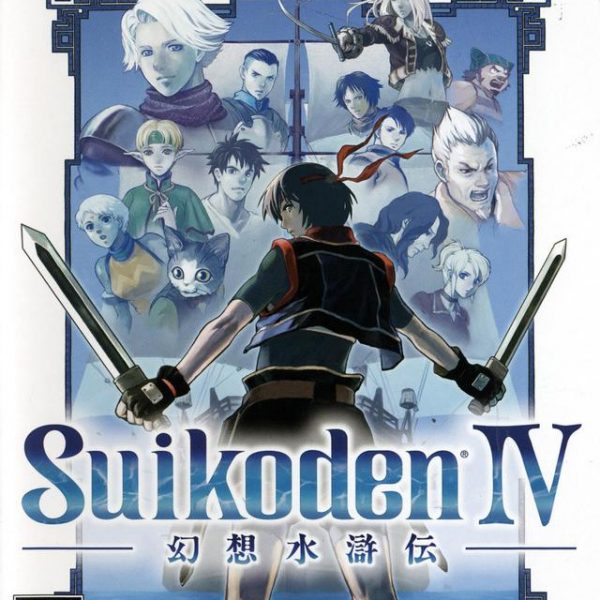 Author’s Note: This review was originally published on June 23rd, 2006. This was published the same day as my Suikoden III review. Again, I was using a game review as a means to spite a few people. Today, Suikoden IV is regarded as the weakest entry by the fans.

Everyone makes mistakes; self-included. Yes, despite the rumors, I do have my imperfections, the latest being my purchasing and playing Suikoden IV. You would think that I would’ve learned from the messy as an aborted fetus Suikoden III that I would never go near this game. Well, for whatever reason, I did. “Maybe things changed,” I thought. Some things did change, but only for the worst. The things that remained unchanged should have been changed. In the end, Suikoden IV should be avoided…in fact it should never even be given a glance.

Suikoden IV stars a silent, young hero you name at the start of the game. Hey, that rhymes! Anyways, he is a new soldier recruit and with his best-friend Snowe (who is ambiguously gendered in my eyes) they are completing their training to become full-fledged naval soldiers. After much training, celebrating, and rewarding, the hero and Snowe begin their quests to serve the navy. Frankly, I was so fed up with the game by this point I never really got to see the main plot in action. Don’t judge me, I feel that completing Suikoden III was painful enough…completing the fourth installment is bloody wrong! However, I can tell you that the story is about more kingdoms fighting against each other, more legendary ancient runes, and mysterious pasts. Once again, you can recruit 108 characters called the stars of destiny to fight for your cause, whatever it was. This also means that you will have about 80 or so characters who are just taking up space within your castle ship. Now, a ship fortress sounds pretty cool, but when it is overrun with underdeveloped and bland characters, the stupid rig might as well sink. I mean, the game sinks in every other department so it should only be proper that the ship follows suit and sinks to the bottom as well.

Navigation on the “world map” is done via ship travel. This wouldn’t be so bad if the ship wasn’t such a pain in the starboard to navigate and maneuver. Now I know what drunken sailing feels like after playing this game. Seriously folks, the people who made the ship controls had to be high on something because it is a broke control system. Walking around towns and dungeons, exploring things, talking with people, and using the menus are your standard RPG stuff. Usually, this is fine with me but with all of the craptastic stuff in the game, I tend to lower the value of everything else that would normally be fine.

Values were lowered mainly because of the battles. First off, you are only allowed four characters in the team instead of the usual Suikoden six. Why? I have no freaking idea. Other than that, the turn based battles have remained unchanged. They take too long to finish, and the experience system is once again set so that you gain about three levels at once and then stop advancing until moving onto the next area. The strategic battles and the one-on-one duels have returned as well. The one thing that was changed, besides the navigation on the world map, was done terribly wrong: the number of characters you can have in at a time.

The graphics look the same as before. The 3D models are bland, lack any emotion or body language, and have little facial expressions. The monsters are of the same caliber and quite frankly, most of them appear rather lame. Even the towns and dungeons are bland. The same can be said about the oceanic world map. Sure the water looks pretty at first, but traveling on that blasted ship for hours on end tends to make the blue look fuzzy due to the sleepiness kicking in. Yeah, it’s that bad.

Musically, the game is just your run of the mill RPG stuff. Your town has happy music and your dungeons have sad music; fill in the blanks as you like. Voice acting accompanies most of the characters in this game, but it wasn’t done all that well. I wasn’t clawing my ears out, but it could have been done much better. Some voice actors seriously need to consider lessons in acting.

I’m not sure how long the game lasts, but I don’t really care. That’s why there is no replay value, nor any reason to give this game a chance. It’s just not good. Period. Even if you are a fan of the series, which baffles me as is, don’t bother with this game. Need an RPG? Find something else, the good games are out there and they are not named Suikoden IV.