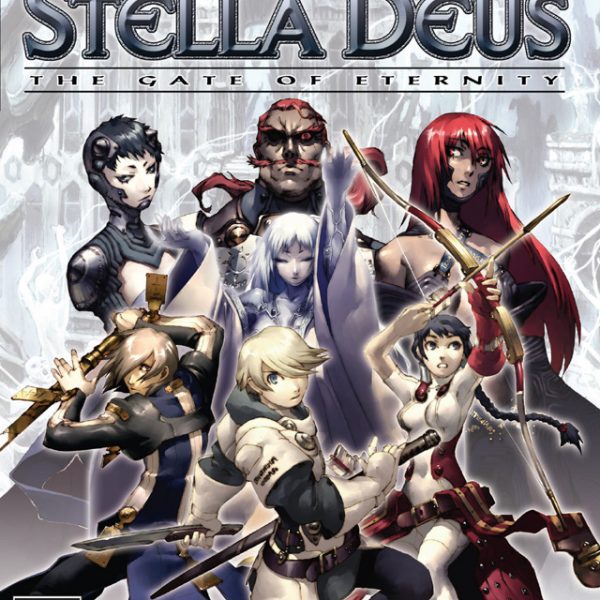 Author’s Note: This review was originally published on August 29th, 2005. Stella Deus is such a special game. Not only is the game fun, but the memories of talking about it with a group of other gamers really made the experience memorable. As we continued to talk, we began to move beyond gaming and discussed issues with work, life, relationships, etc. Today, these gamers have all gone their separate ways. This review reminds me of that special time with them.

Stella Deus is a fantastic SRPG experience for the PS2. A lot of the user reviews on the website have been giving it flack for not being enough like Final Fantasy Tactics. Excuse me, what? Last time I checked…we weren’t playing Final Fantasy Tactics! Shocker! Stella Deus deserves justice because it is a great game and brings a new world of fun to the SRPG genre. I am fully capable of enjoying Stella Deus and FFT; the question is why others cannot.

Let’s first talk about the setting and story of Stella Deus, which I found to be very enjoyable. It wasn’t complex and hard to understand like other strategy games, yet it wasn’t lighthearted like Phantom Brave and Disgaea. This game takes place in the world of Solum, a world slowly dying because of miasma spreading throughout the land. The greenery turns to desert and spirits fade away. Not only is the world dying, but two groups of people, the Aeque and the Imperial Legion, have been battling with each other for quite some time. The Imperial Legion wants to use the power of alchemy to win this battle and prove to the Aeque, a religious group who believes God wants for them a peaceful end, that power is better passiveness. The Imperial Legion encounters Viser, a powerful and wise alchemist who is best friends with the main character, Spero. After a fierce battle, Viser is taken away to work for the evil forces. Spero sets out to set things right. What starts as a quest to get something back turns into an adventure to save the world from the miasma. As mentioned, I enjoyed the story. What really brought the story together was the cast of great characters that Spero meets. All of them are unique and have a distinct personality. Learning about each character was interesting, although I wish there was more revealed about certain people. The thing that is not good with the story is the way most of it is told: portraits of the characters taking up the entire screen. While beautifully done, I’d like some more sprite animation.

The reason I say I want more animation with the character sprites is because I found the graphics to be gorgeous. Yes yes, I am a sucker for 2D sprites in a 2D type of world but hey, I like bumpin’ to my old school! When you load up the game, you are treated to a wonderful, hand-drawn scene showing off the games classy artwork. There are, unfortunately, only a few of these scenes in the entire game all of which last about one minute. Character portraits have a very unique style, and the character models used in this game are highly detailed sprites that use great body language during the even scenes. Watching Stella Deus unfold was enjoyable, though I just wish there was more animation with the character sprites. Then again, you’ll be seeing them in all their beautiful glory in battle. The battlefields aren’t as detailed as they could be, but they work well enough that you know where you can and cannot go. Spell effects look dazzling, in some stages you can see rivers flowing, colors are abundant in many of the areas (despite the desert setting) and the enemy models (while repeated WAY more times than needed) show that 2D will always be as capable as 3D. The graphics were done well, for the most part. There aren’t any shiny 3D polygons or FMV sequences so if you came looking for that, then you might as well look elsewhere.

The audio is just as great. The voices for the characters may not be too stellar, but the music makes up for it. The opening theme song will really set the mood for the adventure. The creators of the OST worked on other strategy games, so they know how to deliver tunes that give a war-like feeling. The OST is worth hunting down in my opinion, but that’s just me. One thing you will probably get fed up with in terms of the music is that a lot of the tracks will repeat themselves and it will sound like a record player. There is a two second pause so the song can start up again.

Stella Deus shines most in terms of game play and it’s awesome battle system. When not battling, you can do multiple things to prepare for battle. The first is preparing for battle by equipping skills. There are three types of skills in this game. The first are your standard attack/technique/magic skills. Next, you have skills that give an added affect to your stats or possibly cause negative statuses to your enemies. Finally, there are zone skills which affect your team members around your in a good way, or the enemies around that person in a bad way. To get more skills, you can read them from books and also use rank up. Ranking up does take time and special items, but it’s awesome when you see the amazing increase in stats. Characters can go to the shop to buy weapons, armor, helmets, accessories and potions. Characters can equip one of each, with the exception of the last two: there are four slots that can be used for whatever you want. So if you want to give Spero four Love Drops, go right ahead. The more powerful the item, the higher the rank and a piece of equipment with a high rank are typically heavier. With added weight comes a decrease in movement. The next thing that you can do is go to the guild. Here you can fuse equipment by combining two pieces of old equipment. If you get the right combination chances are you’ll get a very powerful item. Unfortunately, the game doesn’t keep track of things you have fused together. The guild also provides you with side-quests. The biggest side-quest of all, however, are the Catacombs. This under ground cavern provides you with excellent opportunity to train your characters. The farthest down it goes is to floor 100, however getting past 50 will require some skill.

Now to the best part of the game play: the battles. Unlike many SRPGs, Stella Deus doesn’t have the player turn/enemy turn system. Instead, all players on the battlefield utilize action points (AP). Each person starts with 100 and doing different things costs a certain amount of AP. Other than moving, any action performed will net you EXP and SP which raise levels and are used to learn skills, respectively. When misused, you can find a character in trouble because his or her turn won’t pop up for a long time. However, when used correctly, you’ll find your characters devastating any foes in your way. The AP system is awesome, and it really adds a new level of strategy to the SRPG genre. Other cool new things are the combination system and vast amount of equipment to use. Also, Stella Deus allows you to play however you want. Basically, if you want to use the Catacombs and level up to no end so you can destroy the story missions, go right ahead. If you want to make a rank ten weapon right off the start, go ahead (as long as you have the cash). What is cool about Stella Deus is that the battles are as hard as you make them. However, don’t let anyone tell you that the Catacombs are required. You cannot set foot inside them and still progress through the game fine, but it will take all of your strategic know-how. Stella Deus can be difficult, but it gives you a lot of ways to overcome any difficulty you might encounter. A tutorial is provided for any questions you may have.

Looking back on it, the hardest parts in Stella Deus were deciding which characters to use and finishing up the game. With eight amazing story characters plus some kick ass secret ones, making the ultimate party for me was a tough task considering the maximum amount of characters you can have in a battle is six. When the game ended, I was also upset because it was just an amazing quest to follow. I was mad that there were no extras. I will go back for more, but it won’t happen anytime soon. The game will run you about 60 hours, so you should buy this game. When you get right down to it, Stella Deus is yet another one of those games that will never get the appreciation or credit it deserves. The dialogue sequences could use more animation and there will be some difficult battles you’ll be facing, but everything else more than makes up for it. Play Stella Deus with an open mind and you will enjoy it as much as I did.