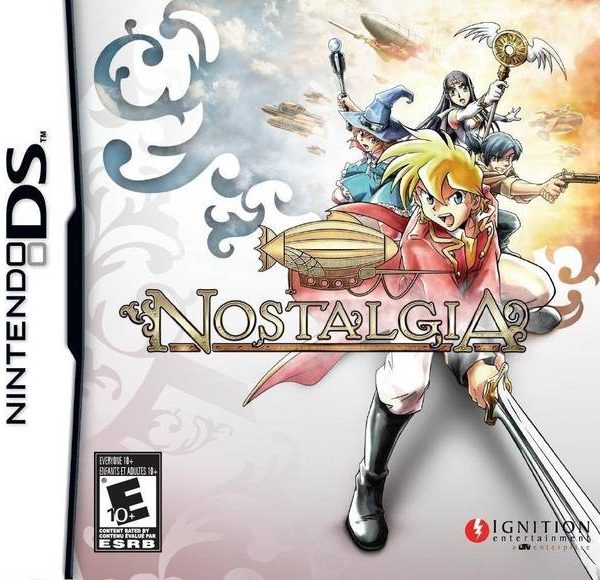 Did you ever play a game that felt like a dead end, mundane desk job? A job so dull that it makes you the question the choices you made in life to get to that point? I felt that way with Nostalgia. I was going through the motions of inputting commands and reading dialogue when, all of a sudden, I found myself having zero amounts of fun. Seriously. Zero. I looked at my play time (ten hours) and realized that I would probably have to endure at least another ten hours of this boredom if I decided to continue. Nostalgia is so boring that it crosses the threshold to bad. It feels like it discourages you from wanting to see what happens next.

As a Nintendo DS game, Nostalgia is unsurprisingly ugly. 3D graphics on the DS have never been a good combination; Nostalgia is no exception. The characters and monsters look blocky. The environments look generic. Despite the game taking place in alternate version of our world, the towns have no personality to them. Exploring Tokyo and Saint Petersburg sounds neat. But, Tokyo and Saint Petersburg feel like the other cities with a different color scheme. The music is fine, I guess. It’s there. Not much to say about it. Or the sound effects.

Looking past the poor presentation, Nostalgia has an interesting start and premise. The game begins with a young girl wearing holy garb getting forced to examine an artifact from some shady folks. Luckily, she gets saved by the RPG version of Indian Jones named Gilbert Brown. As they flee the scene, Gilbert ends up falling from his airship and the girl soars away to unknown lands. The scene shifts to a young adventurer in London named Eddie Brown. Word of his father’s disappearance has inspired him to become an adventurer and seek his whereabouts. With a strong start promising adventure in an alternative version of our world, Nostalgia seems like it’d offer an interesting and classic campaign. I actually enjoyed the story in its simplicity. Sadly, after you get a full party, the pacing comes to a grinding halt. Eddie and his friends are a likable bunch, but they aren’t enough to excite you in moving the story forward. It ends up floundering much longer than it should.

The reason why the characters aren’t enough to keep you invested in this tale is simple: the game play is terrible. Eddie and his crew move from cities to dungeons in their very own zeppelin. Unlike other RPGs, Nostalgia gifts you with your airship from the start. This means that traveling on the world map is done entirely in the air. This interesting idea comes with three issues. The first issue is that navigating to your destination entails you having to maneuver around geographical obstacles. Your next location could appear to be a few seconds away, but Nostalgia wants you to take detours. This leads me to the second issue: altitude. Those obstacles can be overcome if you fly over them, but you won’t be able to until your ship is upgraded enough to fly higher. Also, the higher the altitude, the more brutal the enemies. And this issue of altitude leads to the final issue: airship battles. These are horrible. Eddie and his friends will take actions while enemies try to blast you out of the sky. Picture the most basic turn based battle system. Now, picture it being even more basic. And boring. And tedious. That’s how they are in Nostalgia. They are so poorly designed. These, tacked onto a high encounter rate, make going from one destination to the next miserable.

Battles on the ground aren’t much better since they’re just as frequent. The good news is that they’re quicker. Each character has a role to play in combat. It’s nothing new, but it works. Eddie is your swordsman. Pad is your gunman/thief. Melody is your black magician. Fiona is your healer. You and the enemy party exchange blows back and forth until one side is down. After battle, you’ll get money, experience and special points that can be used to power up your skills and/or learn new ones. Outside of combat, you can undertake side quests, look for hidden treasures, chat with locals, shop, and upgrade your airship. It’s nothing you haven’t seen before.

Overall, 3/10: An endearing cast of characters are stuck in a game so average that it ends up being offensive.