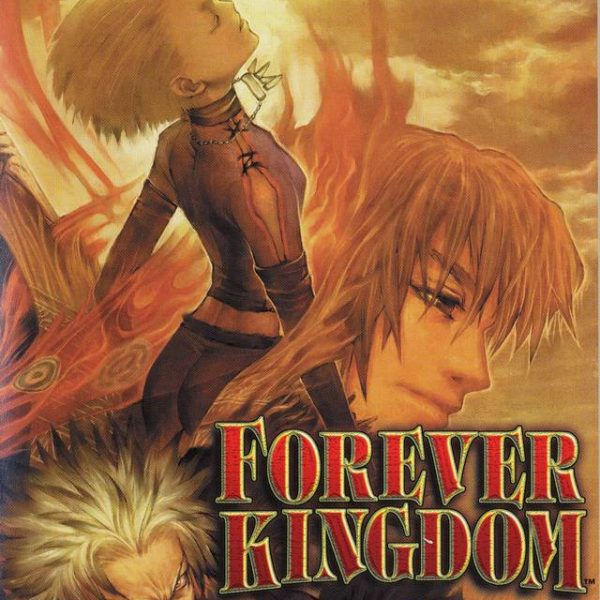 A few days after picking up my PlayStation 2, I searched for other RPGs to play alongside Ephemeral Fantasia. Options were limited due to it being the early aughties and due to me being “too cool” for Final Fantasy X. Forever Kingdom was one of the games available, but all of the reviews out there convinced me that I wouldn’t like it. Yet, since becoming aware of it, I’ve been ever-curious. After all, if I could enjoy something as poorly received as Ephemeral Fantasia, then I should be able to enjoy Forever Kingdom, right? This is a game from From Software; maybe there would be some brief previews of Soulsborne excellence the company is known for. Sadly, appearances of the Moonlight Sword and/or the Storm Bringer weren’t enough for me to recommend Forever Kingdom to anyone. This was a weird and cumbersome game.

Actually, weird is the best word to use when describing Forever Kingdom’s first impressions. Graphically, the game is weird. Character models have creepy expressions and move awkwardly. No matter how much model changing armor and weaponry you give them, characters look downright weird. Whether or not From Software knew how to handle the PlayStation 2’s hardware is up for debate, but it’s clear that this is an early PS2 title. It’s a shame, too. The character art and the opening cinematic are gorgeous. Luckily, the environments aren’t as weird. They’re slightly empty, but they add to the game’s setting of being war torn and oppressed.  Some of the areas are actually pleasant. That said, all sense of enjoyment in exploring anything in Forever Kingdom will be removed if you don’t turn down the background music. The music ranges from weird (there’s that word again) to terrible. It’s like someone put a bunch of sound effects in a blender, pushed puree, and dubbed it the Forever Kingdom soundtrack. Thankfully, you can turn the music all the way down and still keep the sound effects and deliciously terrible voice acting. With the music muted, you can feel the sense of dread as your heroes explore this weird world.

So, who are these heroes? Forever Kingdom begins with three friends traveling to the country of Solta to join the army in an attempt to stop the war between it and the country of Morea. The first is Darius,  a swordsman with a mark on his hand called the Crest. Darius wants to join Solta so he can exact revenge on the Moreans; the ones responsible for the assassination of his family. The next is Ruyan, Darius’ best friend and confidant. The last is Faeana, a young girl that Darius and Ruyan discovered after an event called the Eve of Disaster. Faeana has lost her memory, so she has joined Darius and Ruyan in hopes of finding new meaning in life and learning about who she really is. As the three friends start their journey, they encounter a magician that looks as evil as every villain you’ve ever seen named Darsul. Darsul uses the a curse called the Soul Bind on the three friends. Due to this curse, Darius and company share the same soul. If one of them dies, then they all die. Before they can carry on with their lives they need to find Darsul to get this curse removed. Kind of like the opening cinematic, the start of the story is pretty neat. The goal is clear: remove the curse. But, as they travel onward, the story becomes messy. Things get explained regarding Faeana’s memory, the Eve of Disaster, and a few other incidents. They just don’t get explained well. It’s not an epic tale, but it could have been described better. Also, there’s an important character named Solca. Darius and his friends want to go to Solta. Yeah…it’s hard to keep track of.

After receiving the curse, your journey begins. You’ll get a pretty good idea of what to expect for most of it from the get-go. Forever Kingdom is an action RPG that is basic at its best, and disastrous at its worst. In theory, it sounds like it would be solid. Darius, Ruyan, and Faeana can equip a variety of upgradable weapons and armor that change their character models and the way they perform. Each character has a unique ability when they perform a guard. Each character has a strength and weakness. Each character can perform a Palmira Action (the game’s term for magic) based on their equipped accessory. You can even chain these together to form a combo. So, what’s the problem? None of these ideas really come together to form something cohesive. The game gets muddled further by unresponsive controls. Forever Kingdom’s 3D action lacks the ability to lock onto an enemy. You can’t control the camera; all you can do is move behind the character you’re controlling. Enemies hit hard and fast. Darius and Ruyan aren’t fun to control since they move as slow as molasses. That’s just a few of the issues. There are a few occasions when the game shows some promise, such as with solving puzzles. But, the fun with that is short lived since most of the time is spent trying to hit enemies. Mercifully, the game has crystals scattered generously throughout the game. These warp you to a shop where you can purchase new gear, try your luck at the coliseum, and save your game. Even when (not if) you get a game over, it’s somewhat nice knowing that your last save was just a few minutes ago.

The only good features in Forever Kingdom are that you can skip all story scenes and that the play time is short. Seriously, I finished the game in under seven hours. That was after a fair amount of getting game overs, too. Finishing the game unlocks a Bonus Game. This allows you to play through the game again with all of your gear. But, I don’t know of anyone in their right mind who would want to do such a thing. My curiosity with Forever Kingdom has been satiated. I didn’t have fun so I won’t be playing this game ever again. Its empty world, poor controls, weird presentation and nonsensical story make me glad that I didn’t use my hard earned money back in the day to make this my playing companion to Ephemeral Fantasia.

Overall, 4/10: Forever Kingdom? More like “Never” Kingdom! This was a poorly designed game. But, worry not. From Software eventually learned how to make a decent product.