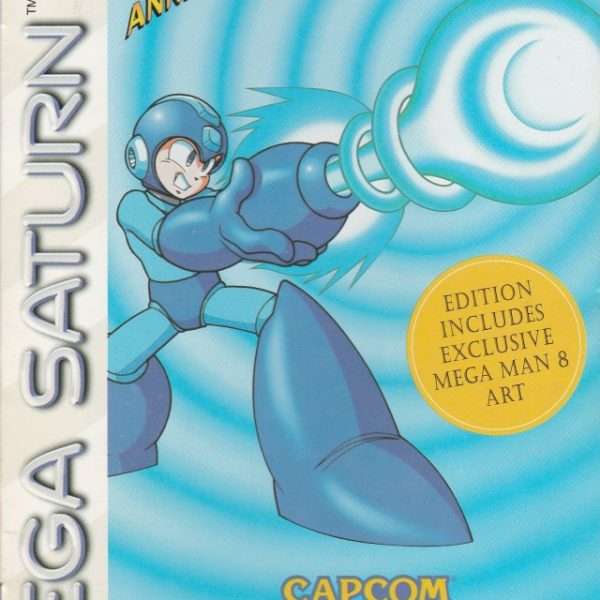 Whenever I mention Mega Man 8 to my fellow gamers, the response is usually negative due to the game’s voice acting. I always found it odd when a game does so much right, but the only thing that gets remembered are the negative aspects. Sure, Mega Man 8’s voice acting cast isn’t going to win any awards. However, beyond the voice acting is an otherwise great entry in one of the well-known video game franchises. It’s an entry that I recommend to anyone who considers themselves to be a Mega Man fan.

Mega Man 8 begins with two aliens going toe to toe against each other in an all-out brawl. After the fight ends, one of them plummets to Earth where we see Mega Man and Rush outsmarting both Bass and Treble. After Mega Man easily wins, he gets informed from Dr. Light that Dr. Wily is up to no good once again. Mega Man disposes some minions and ends up finding the aforementioned alien in critical condition. Not only does Mega Man have to put a stop to Dr. Wily, but he needs to uncover the truth about this robot. The story in Mega Man 8 is as predictable as it gets, but the interesting thing about it is how we get to see Mega Man and his friends in a new way.

Indeed, Mega Man 8 features gorgeous 2D sprite work and has a fair amount of anime styled FMVs thrown in for good measure. In terms of aesthetics, the game delivers: colors everywhere, a variety of enemies, unique abilities, and more. The music is catchy as to be as expected in a Mega Man title. Something I learned recently was that Saturn version’s rendition of Tengu Man’s stage was different than the PlayStation versions. The FMVs hearken back to a time when anime was starting to gain popularity in the states. I still enjoy anime, but back in the late 90’s and early 00’s, I was an anime fiend. Seeing these anime scenes in Mega Man 8 remind of that time. They’re great. Of course, one of their criticisms has to do with the voice acting. Yeah, it’s bad. However, I feel like it adds to their charm. Dubbed voice acting from that era was usually just as bad, so I don’t find the criticisms to be totally warranted. I’m rambling, so hopefully you get the point: Mega Man 8 looks and sounds great.

The blue bomber’s transition to the 32-bit realm has the look, but does he have the game play? I would say he does. Up until now, I considered Mega Man 3 to be my favorite of the traditional games. Having gone through Mega Man 8 for the first time in years, I feel that this game is the strongest in terms of game play. In fact, if not for a few stages that are fist-pounding levels of frustrating, Mega Man 8 is as good as it gets. Once again, you take control of Mega Man as he runs, jumps, slides and shoots his way through various stages. At the end of the stage is a Robot Master. Defeating the Robot Master lets you acquire its special ability. These abilities not only serve as ways to quickly dispose of other Robot Masters, but they are used to access hidden areas. For instance, your reward from defeating Clown Man is the Thunder Claw. The Thunder Claw unleashes a whip of electricity, but it can be used to swing across certain points. The Ice Wave from Frost Man can be used to temporarily freeze certain mechanisms. The weapons in Mega Man 8 are all useful in their own way.

Littered throughout each stage are Bolts that can be used to buy extra power-ups for Mega Man. Since there are a limited number of Bolts, it’s important to determine which power-up best serves your needs. Finally, not all stages will be accessible from the start. Just like Mega Man 7, you will only have access to four when you start a new game: Frost Man, Tengu Man, Clown Man and Grenade Man. Once finished with those, you will be able to head to the final four stages. With the exception of one stage which I’ll talk about in a second, each stage is fun and unique.

So, what’s the exception? I’m talking about Frost Man’s stage. In both areas of it, Mega Man will hop on a snowboard and the game will become an on-rails side-scroller. It sounds fun. Unfortunately, it trips over itself. As Mega Man begins his snowboarding journey, prompts will flash on the right side of the screen. These will let you know that you either need to jump or slide in order to avoid a quick death. Due to the way these messages get relayed, things become very hectic very quickly. You’ll be told to jump, and before you can blink, you’ll be told to jump again. Out of all of the stages in Mega Man 8, Frost Man’s stage gave me the most game overs. Luckily, a generous continue system lets you pick up where you started and, eventually, it will become muscle memory. It was just a poor design when it could have been something fun.

This review is for the Sega Saturn version of Mega Man 8. Those that wish to experience this game have much more cost effective means. There is the PlayStation version, the Mega man Anniversary Collection, and Mega Man Legacy Collection 2. Personally, I was glad to play the Sega Saturn version due to its subtle differences. No matter which way you go, Mega Man 8 is a solid title and a worthy entry in the series. There are some hiccups, but I think the game is not deserving of all of its hate.

Overall, 8/10: Mega Man feels right at home on a 32-bit console. All fans of the blue bomber will enjoy Mega Man 8.