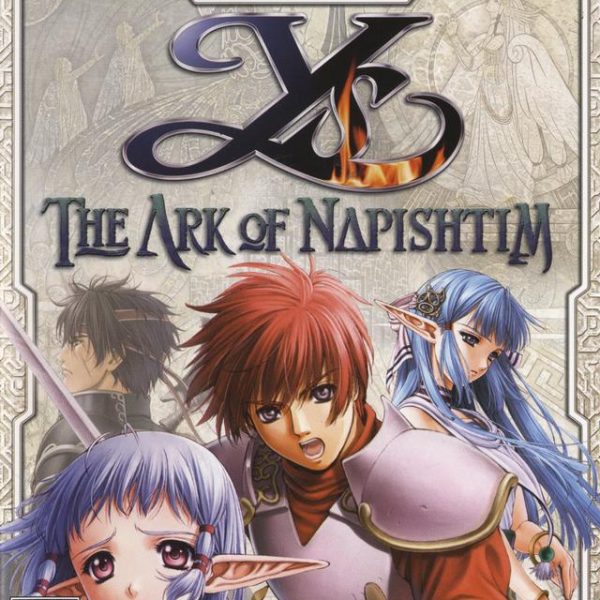 Author’s Note: This review was originally published on April 8th, 2005. It was later updated with “witty” taglines on November 11, 2009. I’m not sure what compelled me to make the update; I feel like the review lost some of its authenticity as a result.

I’ve never heard much of the Ys series before until a few months ago when I saw gorgeous screen shots of this game. I heard it was originally released on the PC, and was the sixth addition to the Ys series. Americans finally got their paws on this game thanks to Konami publishing a PS2 version. I loved every minute of it. My only complaint was that it was far too short and had potential to be longer.

Vexing Vortex.
Adol Christin and his best friend Dogi are in a tavern when they are encountered by the pirate Captain Ladoc. They ask Adol and Dogi to go on a quest to search for the Great Vortex of Canaan. Romun soliders all of a sudden break into the bar and attempt to abduct Adol and Dogi. The two friends escape with Ladoc and go on his pirate ship. Captain Ladoc sets sail for the Great Vortex, but a Romun battleship fleet starts firing at the crew. Adol gets flung overboard and ends up on a tropical island. He is rescued by a girl with long ears and a tail named Olha. Beautiful Olha takes Adol in. When he finally wakes up, Olha tells the red haired hero that he has landed on Quatera Island in the Great Vortex of Canaan.

Seeing as this is my first time with the saga, I’m not sure if Ys is known for heavy or thought-provoking stories. The case with Ys VI is that it starts off as a basic story with some mysterious characters and Adol having a drive for adventure, but it ends up having a climactic finish. Either way, I really enjoyed the story. It had some amazingly developed characters that all portrayed solid and believable emotions. Plus, the NPC’s in the towns had interesting things to say. For those who have played Lunar, you know how important it is to talk to the NPC’s twice in a row. The same is the case with Ys. Usually doing something like this a chore, but in Ys VI it was enjoyable.

Triple the Fun.
Ys VI is an action/RPG. It has a lot of elements you’d recognize from a Zelda game. Adol fights alone, but that’s because he is able to handle himself. When you’re not fighting, Adol can run and jump around the towns. There are also plenty of locals to interact with. Some may provide you with little side quests that will grant you more money and items. Adol can purchase items, shields, armor, and accessories at the various shops. Money is rarely a problem, so that’s something we don’t have to worry about. Adol also gains three magic swords along the quest. They are powered by wind, fire, and thunder. These are powered up at the Emelas Studio. By having a certain number of Emelas (magic stones that you get from killing monsters) you will be able to level up your swords to gain their respective sword skill and power up their magic attack. While each sword level up will grant the sword a strength increase, it will take a few levels until you can learn it’s magic and skill. These skills are used when Adol fights the many monsters on the island.

When Adol fights, boy does he fight! Adol’s arsenal consists of a three hit combo, an upward whirl slash, a downward thrust jab, a dash attack, and a very complicated dash jump. To survive this game, you’ll have to master all. Each enemy Adol faces will have it’s own unique way of attacking, which means it has it’s own way of being defeated. As mentioned, each sword has it’s own skill. The wind sword utilizes a four hit combo ending in a tornado slash. The fire sword allows Adol to shoot a short blast of flame towards the enemy. Finally, the thunder sword allows for a dash attack in which Adol flies across the screen in a trail of bolts. Also, each sword has it’s own powerful magic attack, which are quite necessary to use against the challenging game bosses. Magic points are gained by attacking enemies and receiving damage. The wind sword causes Adol to be surrounded by a typhoon. The fire sword causes a huge explosion in front of Adol. The thunder sword creates a lightning bolt that bounces from enemy to enemy until all are zapped to dust. Combine all this stuff into one game, and you got yourself one of the most fun and addicting action/RPGs. EVER! I really loved slashing enemies, gaining Emelas to power up my swords, and leveling up. Speaking of which, one level can make or break you, especially in the boss fights. But don’t worry, the dungeons are huge enough to gain a few levels. Furthermore, each dungeon has plenty of treasure chests for you to obtain. All in all, Ys VI is a blast to play. Whether you’re fighting a giant slime, scorching a maniac plant, or jumping over stone arms, rest assured, you’re having fun.

Love My Sprites.
A lush and brightly colored 3D world + 2D anime sprites = AWESOME! That’s the equation Ys VI, like other games, has used to deliver an eye candy feast. One thing that you’ll notice about the graphics are the colors. There is color EVERYWHERE and it’s color done right. The world of Canaan is seriously beautiful. I loved exploring the dungeons, the towns, the whatever, and giving my eyes an awesome treat.

Traditional Tracks.
Most people on the Ys message boards say that the music has been a very important part of the series. I guess this game is no exception. The music in this game is top-notch. There are a lot of electric guitars mixed with awesome bass drum beats. There is also a pop aspect to the music as well. The action wouldn’t be as great if not for the awesome music. I really enjoyed it and I really, REALLY want to hunt down the OST. As far as sound goes, I have no complaints. The voice-acting is high quality. Unlike other games with rather ho-hum VAs who show little emotion during the conversations, the characters in Ys VI have a lot realism. Yes, there is the occasional character who is annoying (Terra) but over all the voice acting is of very high quality.

Canaan Canon.
Ys VIis short, so it doesn’t take too long to complete the first time. Also, there are three levels of difficulty to experience. There are time trials, hidden secrets, and cheat codes that add more to the replay value. But, like most RPGs, you probably aren’t going to come back for more after you beat the game once. However, I see this game becoming rare in the years to come and you don’t want to miss out. Hunt this game down and buy it. It was worth every penny. To sum all up, Ys VI was amazing. I loved it. It was just too short, which is quite a shame. Everything from the gorgeous visuals to the great music and the fast-paced action elements added up to a fantastic action/RPG experience.