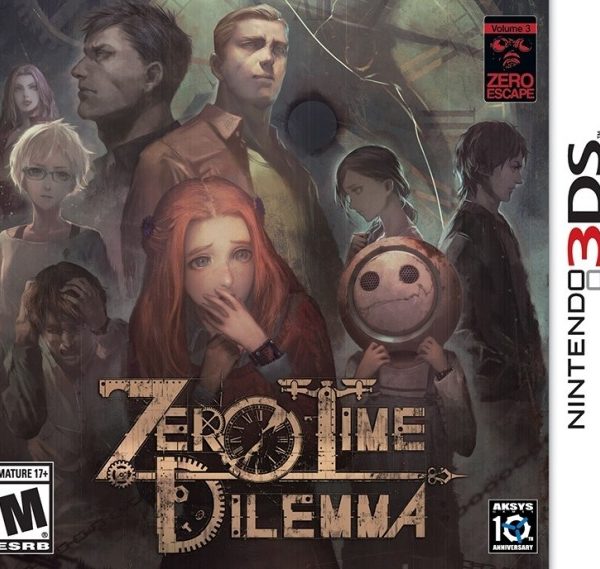 Despite all of my years gaming, Nine Hours, Nine Persons, Nine Doors was unlike anything I ever played when it was first released. It mixed the awesome writing and the attention to detail of a visual novel with clever “escape the room” puzzles that made you think about all of the moving parts. The decisions you made would lead to different endings where some characters would live and others would die, with the deaths usually being unsettling. After its conclusion, Virtue’s Last Reward continued the trend of being a game full of believable characters, an excellent script, more life or death choices, and more puzzles. An outcry from the fans has led to Spike Chunsoft finally finishing the last entry in the Zero Escape series called Zero Time Dilemma. My hype was overflowing when I started up the game. As I continued to unlock more branching paths that continued to lead to the game over screen, things started to get less fun. This is a lackluster game that is a disappointing way to say farewell to such a unique series. I still recommend it to fans of the series, but get ready for some upsets.

One of the biggest issues with the game is its presentation. Unlike 999 that featured voiceless text with a variety of backgrounds and Virtue’s Last Reward that mostly played in a typical visual novel format, Zero Time Dilemma is fully “animated.” I use that term loosely because the graphics are blundering, basic and bleak. The character art and concept art have a solid look, but seeing this cast of nine characters transition to 3D to move and talk so awkwardly is reminiscent of a low-budget CGI film. The game has a serious tone and it’s hard to appreciate it when the presentation is so choppy. Even the scenes that involve their deaths are hard to appreciate. I would have been with a presentation similar to that of Virtue’s Last Reward. One saving grace for the graphics is that the puzzle rooms are much more pleasing. Luckily, the music and voice acting fared better. The voice options are either English or Japanese, both of which sound fine. The unfortunate thing about the English voice acting is that the words don’t match up with the lip movements, similar to a poorly dubbed anime.

So, yeah, the presentation is pretty awful. But, you know what? I’m able to put up with it since the main draw of the Zero Escape series is the story. Each game has elements of horror, psychology, science fiction, philosophy, history and mythology. Zero Time Dilemma, which takes place between the first two games, is no different. Nine people, some returning from either 999 or Virtue’s Last Reward, are trapped in a bunker by a masked man who goes by Zero. Wearing a theater mask, a black cloak, clawed gloves and a wide-brimmed hat, Zero is an imposing figure that has tasked these nine people with playing the Decision Game. In order to leave their confinement, they need at least six passwords. Unfortunately, the only way to earn these passwords is to have other members killed. Zero separates the nine people into three teams of three and lets the game begin. Each team has to solve puzzles and question everyone’s loyalty in another fight to stay alive.

In traditional Zero Escape fashion, each contestant is wearing a stylish yet scary watch. Every ninety minutes, the watch will unleash a drug that renders them unconscious and gives them temporary amnesia. They’ll retain their memories with the exception of the previous hour and a half. In other words, every ninety minutes they will have forgotten what happened. Playing to the amnesia theme, the story uses fragments to tell the story in a non-linear way. In some ways, it makes sense. In other ways, it can feel like a chore to truly understand the events that transpired. The beginning fragments of Zero Time Dilemma are all over the place and it feels overwhelming. The further you get in each fragment’s branching path, the more choices and new fragments you unlock. It’s a clever idea, but the execution feels off due to the fact that you need constantly backtrack and make alternate decisions with obvious outcomes. There is more required backtracking than there was in Virtue’s Last Reward, and most of the branching paths don’t have any impact on the overall outcome of the story. Despite these annoyances, when things start to heat up near the end of certain branches it makes all of the effort worth it. There are multiple endings to witness, with each one revealing more and more secrets about the cast of characters and their origins. The narrative is a mixed bag in every sense. There is great writing with a great cast, but understanding everything that they are going through will take plenty of effort.

When you’re not going back and forth between fragments, you’ll be solving puzzles. The characters are faced with “escape the room” scenarios that require you to combine memorization and logic. These are an absolute delight to play. They are complex, but never complicated. They require you to think, but not so hard that you’d have to resort to a guide for the solution. They take place in a variety of rooms and make you use objects you would never have thought to have been useful. The puzzle rooms also provide you with the opportunity to get to know your characters more because they make a comment on each clue, item and device you find. It’s a nice touch that makes you want to prolong your time in these rooms because you are able to interact with nearly everything in them. Using the stylus or the buttons, you can access your files, use a memo pad with a variety of colors to write down information, combine items, or examine objects. The controls are simple and easy to use. Seeing as this review is for the Nintendo 3DS version, it should go without saying that I prefer using the stylus to solve the puzzles. Once you do arrive at a solution to escape, the story will continue with you needing to make more life or death choices.

With a variety of choices and endings, Zero Time Dilemma will last up to 20 hours for those that want to see all of the branching paths filled. I’m very pleased that the game was fully realized and came to fruition. There were some unanswered questions in Virtue’s Last Reward that are answered by Zero Time Dilemma. Obviously, you should play Zero Time Dilemma only after going through the first two games. What doesn’t please me is the direction the game took in terms of style and story progression. Even with some grizzly and over the top death scenes, the graphics in Zero Time Dilemma need work. It takes a while to acclimate to the disjointed method of storytelling with the three teams having their own fragments. Witnessing the result of your choices in branching paths just for the sake of filling in a slot takes away from the intrigue of the consequences of your decisions. However, the puzzles, characters and overall narrative make the game recommended to fans of the series.

Overall, 6.5/10: I recommend Zero Time Dilemma to all fans of the Zero Escape series, but understand that some things will be drastically different from the first two titles.