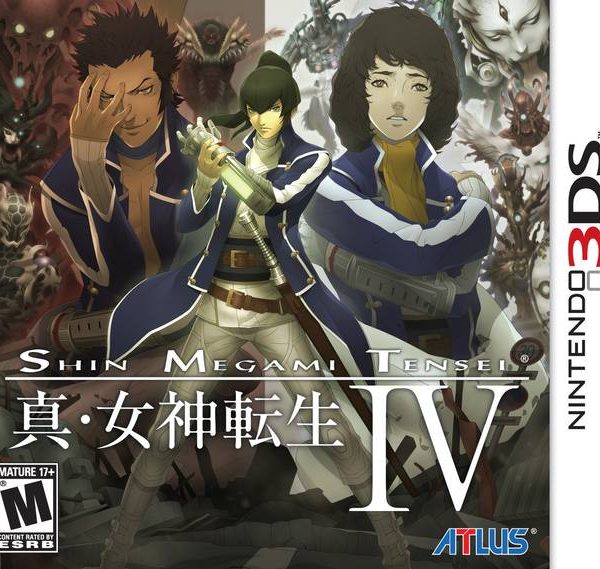 Shin Megami Tensei IV starts in the Eastern Kingdom of Mikado, a European styled city that has a strong set of religious values, as well as a caste system that causes tension among the people. Two friends, Flynn and Issachar arrived to Mikado to undergo a test to see if they are worthy of becoming Samurai, the guardians of Mikado. Samurai are revered in Mikado because of their duty, and because they have the ability to control demons. Issachar fails, but Flynn succeeds and becomes a Samurai. Now, Flynn has to fight for the good of the Eastern Kingdom of Mikado and prevent demons from escaping the mysterious dungeon of Naroku. However, Flynn’s duty will involve much more than he thinks.

Similar to Nocturne, Shin Megami Tensei IV has a silent protagonist. Flynn represents you, the player. The choices you make throughout your journey will shape not only him, but various moments in the story. Nearly every choice you make alters a hidden statistic that represents your alignment. At the end of the game, your alignment will set the course for the final events that effect the fate of the world. Flynn is joined by three Samurai. While they offer some characterization, they are really nothing more than personifications of moral pathways. It’s clear from the start that Walter represents chaos, Johnathan represents law, and Isabeau represents neutrality. The choices you make lack the organic feeling from Nocturne. That complaint aside, the story in Shin Megami Tensei IV is fantastic. There is more than meets the eye behind Mikado and its rulers.

Shin Megami Tensei IV has a more traditional approach to its game play. Nocturne forced you to sink or swim after finishing the first dungeon, but Shin Megami Tensei IV gives you more guidance. Navigation takes place on a menu that lets you select a destination, a 3D field where you move your character, and an overhead world map with icons representing you, NPCs, demons and locations. Getting to your destination is easy, but the world map feels cluttered. I didn’t like the way it was presented in Nocturne, and the one featured in Shin Megami Tensei IV is worse. Eventually, you’ll get access to Terminals that let you hop around to key locations.

Most of the time you’ll be in 3D fields that are full of folks to chat with, demons to face, or a combination of the two. In the shops, you can purchase items and new equipment for Flynn. The equipment has a cosmetic effect, so it’s fun to play around with various pieces of gear to turn Flynn into a fashionable and powerful force. There are various NPCs to speak with that usually offer a witty one-liner about the current situation. As you continue to travel, demons will pop up out of the ground and make a beeline towards Flynn. You can strike them with your weapon to deal a bit of damage and begin the battle with a slight advantage. Of course, these demons mean business. If they run into you, chances are they get the first strike. Herein lies another issue: these environments have a tendency to get too crowded. At times, it feels like you’re replaying Nocturne due to the high encounter rate. Mastering the first strike takes some getting used to.

Battles are turn-based, but move at a brisk speed. Flynn and up to three demons can participate in battle. The computer will control one of your Samurai friends that act as a supporting character. The Press-Turn System is back and has been improved to offer more strategy. By landing a critical hit, repelling an attack, or striking an enemy with their weakness, you gain an extra turn. You lose a turn when the enemy absorbs your attack. As usual, enemies can do the same thing to you to gain and/or lose turns. However, there is a new feature in Shin Megami Tensei IV that adds another level of strategy. Gaining an extra turn offers the chance for your character to enter “Smirk” status. While Smirking, chances for a critical hit increase, elemental weakness is removed and statistics are amplified. Your foes can Smirk, too. It can make a battle become very dangerous. Shin Megami Tensei IV is a challenging game because enemies hit hard and fast. They also hit smart; they will do all they can to expose your party’s weaknesses. Boss battles can be especially brutal. The key to victory is to end the battle as quickly as possible. Prolonged assaults will take their toll on your party.

Despite it’s challenge, Shin Megami Tensei IV is easier than Nocturne. Should Flynn get KO’d, the game doesn’t end. You can retry a battle at the cost of Macca or Play Coins. Finally, after losing enough times, you can access an easier level of difficulty. It’s easy to get discouraged in Shin Megami Tensei IV, but the new levels of accessibility and the feeling of triumph after toppling a massive boss make the challenge worth it.

One of the most important aspects of combat is Demon Recruitment. After speaking with a demon, you can attempt to get him/her/it to join you. The demon may ask for items, ask for energy, or ask you a question. If you succeed in swaying the demon, they will join you. However, failing to please them means you forfeit most of your tuns. Recruiting new demons is just as rewarding as finishing a grueling battle. There is a wide variety of demons to recruit. You can also fuse them with each other to make new ones. As demons level up, they will learn new skills that can be shared with Flynn. Shin Megami Tensei IV’s combat is fantastic. It’s challenging, but it’s that same level of challenge that makes the game worth playing.

Obviously, there is always something to do in Shin Megami Tensei IV. I won’t get into other features such as Special Fusions, boss choices, side-quests, or the training missions. Instead, I’ll gush about the graphics and music.The presentation is another highlight. The level of detail given to each demon, special ability, cut scene and environment is impressive. The only flaw comes with the world map being too messy to navigate. The music is another solid aspect. It brings together a variety of genres in a unique way that fits the setting. Backing up the music is believable voice acting. Flynn may not say much, but the supporting characters and the multiple demons have plenty to talk about.

As I mentioned earlier, finishing Shin Megami Tensei IV can take up to 50 hours. Chances are your final time will be longer due to playing around with Demon Fusion and side quests. A generous new game plus will allow you to select a new level of difficulty and attempt to go for a different ending. It’s impressive how much content Atlus packed into this tiny cartridge. Personally, I prefer Nocturne to SMTIV. However, I still recommend it to all RPG fans. It has a few issues that can put a damper on progression. However, just like Nocturne, I was sad to see the game end.

Overall, 8/10: Shin Megami Tensei IV offers something for long-time fans and for those that are new to the series.