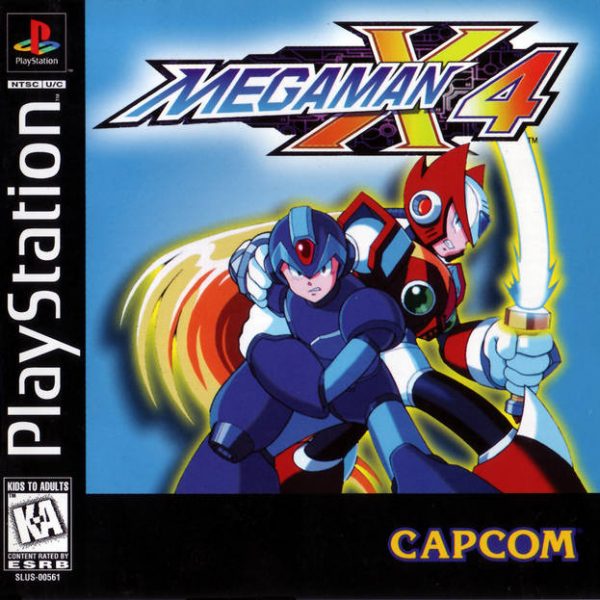 Author’s Note: This review was originally published on April 30th, 2006. The praise still rings true. This is still one of my favorite games of all time.

What’s there to say about Mega Man X4 that hasn’t already been said by fans of the long-running Mega Man X series? Not much, but I figured I could leave readers with my two cents on the matter. Mega Man X4 was X’s first Playstation debut. Despite the game being shorter than usual, I have decided to consider it my favorite Mega Man game of all time. Why you may ask? Well, since this the fourth game in the series, I will list the top 4 reasons why I love this game ever so much.

1. Game Play
Those familiar with MMX will feel right at home when they pick up the controller and start blasting away. At the start of a new game, you can chose to play the story as X or Zero. Both heroes follow a similar path, but they fight different bosses at certain parts of the game. Also, they both play entirely differently. Where X is all about shooting enemies with charged shots at long ranges, Zero is a melee fighter who has the powerful Z Saber that can create lethal combos. Both heroes can dash, jump, and wall climb. X is the only one who can get up-graded parts via pods that were hidden by Dr. Light. X and Zero fight the same 8 maverik robots, but their moves are very different. X’s require energy, where Zero can use his infinitely. While both players are fighting the same enemies, how they fight is completely different. Either way, it is a ton of fun. There is never a dull moment when you’re dashing through the levels, blowing up everything in your way. One very cool part of the game is that one stage sends you riding on a motor bike!

2. Music
It’s a Mega Man game, how can the music NOT be good? With plenty of head-banging tracks, MMX4 is made more exciting thanks to the music. Every stage has a fun tune for your listening pleasure. I expected the music to be great, and my expectations were met. One nifty feature is that in the intro stage, X and Zero have different background songs. Also, after a boss has been destroyed, the victory music for X and Zero is different.

3. Graphics
Not only are the 2D visuals colorful and detailed, they are also living proof that you don’t need graphics in 3D to have a beautiful game. Yes yes, most of you know by now that I am a sucker for the 2D graphics, but one look at MMX4’s vibrant backgrounds and you won’t be able to stop staring. Furthermore, there are plenty of well-drawn anime cut-scenes that advance the story. X and Zero have different scenes; a very cool bonus.

4. Replay Value
Mega Man games are usually completed in one day, however they are so fun that you’ll want to play again and again. This is the case with MMX4. With two stories, tons of ways to play, secret costumes, different story segments, and the absolute fun factor of the game you’ll be playing again and again.

Those are the four things that I greatly enjoyed about Mega Man X4. Unfortunately, all games have down falls. The first is the story. After an attack in the Sky Lagoon, X and Zero feel that the people responsible for the attack are the army members of Repliforce. Repliforce’s second in command, Colonel, declared the war after refusing to come in for questioning. The first in command, General, has declared that the fighting is not to destroy humans, but rather to be segregated from the humans and live in a nation only of reploids. Was it really Repliforce behind the Sky Lagoon attack?

Obviously the story is rather basic, but people rarely play a MMX game for it’s story. X’s story introduces the character Double, who happens to randomly appear just after the Sky Lagoon attack. People playing as Zero get introduced to Iris, the Colonel’s younger sister who only wishes for the fighting to stop so her big brother stays out of harms way.

Another down-fall is that the game was a little short, but other than these cons Mega Man X4 is by far my favorite game in the series. Capcom may have made some mistakes in the past, but this game makes up for them. If you want a great game, hunt this down. If you are having trouble finding it, I suggest you hunt down the Mega Man X Collection. This collection contains MMX-MMX6. Regardless of the way you go about buying MMX4, just make sure you do indeed get it. It’s a classic game with classic action that forever will be enjoyed.