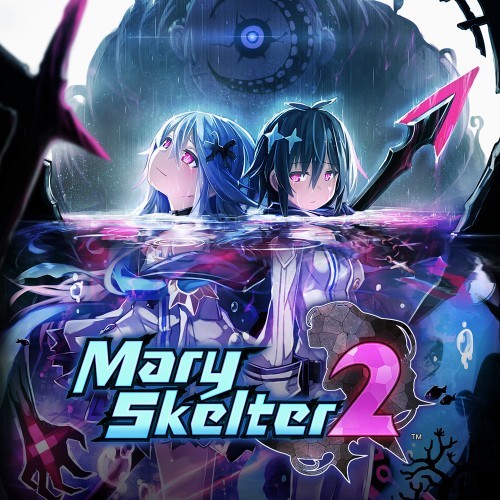 Mary Skelter 2 acts as a prequel to Mary Skelter Nightmares. Once again, we’re transported to a twisted, distorted version of our world where a living organism called The Jail buried all of civilization underground. Marchens are still running amok, and only young girls called Blood Maidens can stand against them. Players are introduced to two new Blood Maidens: Otsuu and Little Mermaid. Along with Red Riding Hood, the Blood Maidens have been exploring various areas of The Jail hoping to find new Blood Maidens to join them. During their current expedition they discover a group of prisoners. One of the prisoners is a Blood Maiden named Alice. Alice, her best friend Jack, and the rest of the captives are released. A new yet familiar group of personalities ready themselves to escape The Jail and their fates.

Otsuu likes to act as the Little Mermaid’s “prince.” The two are inseparable and have an adorable dynamic. Otsuu is overly protective of her “princess” and Little Mermaid is always thrilled to have her nearby. Their relationship might take center stage but the other characters you meet, both new and familiar, round out the cast nicely. The downside to the huge cast of characters is that everyone always has something to say. No matter the event and how important it is, everyone needs to chime in. It adds a lot of filler. The story is great, but you need to wade your way towards the good parts. Those that stick it out will enjoy a fantastic conclusion that wraps up the tale nicely and gives extra insight to the events that happen in Mary Skelter Nightmares.

Obviously, the narrative is the most prominent new feature in Mary Skelter 2. The other notable new features are showcased in the gameplay. Your Blood Maidens can reduce their levels to gain experience and stats faster. You can plant Blood Crystals in dungeons and watch them grow into new equipment. Blood Packs can be assigned to the Blood Maidens for extra power and ability. It’s a lot to take in, and that’s just the beginning. The Job System has returned with new and varied options. Building the perfect party with a large cast of characters is a time-consuming yet rewarding endeavor. Sadly, not all Blood Maidens were created equally. Magic users were given the short end of the stick. Physical attacks and passive abilities outshine anything to do with magic.

Unsurprisingly, most of your time in Mary Skelter 2 will be spent in massive dungeons filled with traps, mechanisms, and bizarre enemies. A neat feature is the ability to alter the dungeon to provide extra rewards and/or challenges. The dungeons are varied in look and atmosphere, but like Mary Skelter Nightmares, the navigation will get tedious because each one is massive. There’s always something to discover, but a poor mini-map and the return of the stalking Nightmare requires a lot of patience. There are a lot chapters in Mary Skelter 2, which means there a lot of multilayered dungeons. The excitement of entering one will diminish quickly.

Combat in Mary Skelter 2 has remained unchanged for the most part. Once again, battles are presented in a first-person perspective. The turn order is displayed at the top and your team’s stats are displayed at the bottom. Both sides take turns exchanging blows until one side falls. Overkilling enemies, exploiting enemy weaknesses, and attacking from behind will cause the enemies to bleed. When enough blood spatter coats your Blood Maidens they will enter Massacre Mode. This gives them a slight boost in ability, unlocks specific Massacre Mode skills, and provides healing with additional spatter. Licking the blood off the maidens will provide the team with bonuses. Finally, if the Blood Maidens have an abundance of Corruption (indicated by darker colored blood icons) then there’s a chance they will enter Blood Skelter. Blood Skelter maidens have surges in power, but they’ll attack friend and foe alike. Jack’s presence in Mary Skelter 2 should indicate to fans of Mary Skelter Nightmares that Corruption can be purged with his help. You’ll have to monitor Jack’s well-being as you monitor your team’s Corruption. It’s a lot to consider, but most battles will be over in a matter of turns if you play on the standard difficulty. Boss battles are where every asset of combat needs to be watched carefully. Bosses pull no punches, have multiple parts, multiple turns, and a lot of energy. Mary Skelter 2 is more challenging than Nightmares. However, it’s equally enjoyable. With additional features and options, Mary Skelter 2’s combat will be fun but get repetitive the longer you hang in a dungeon. Typical stuff for dungeon crawling RPGs.

Mary Skelter 2 has a similar aesthetic to Mary Skelter Nightmares. The talking animated portraits used in recent Idea Factory game have returned. The artwork is gorgeous, but it’s just as awkward. The enemy Marchens and Nightmares are disgustingly beautiful – lots of variety, color, shapes, and designs amalgamate to form some disturbing looking enemies. The music is fine; typical Idea Factory stuff that we’ve heard before. Voice acting is solid with either Japanese or English voice options. I opted for the Japanese option for my initial run.

Mary Skelter 2 is a long game stuffed with content that can make it last up to 80 hours. Personally, after the eighth chapter I dropped the difficulty to Easy so I could get to the end. Even for a dungeon crawler, Mary Skelter 2 can get loquacious and tedious. Was the conclusion worth it? Yes, of course. It’s just that getting there could have been more streamlined. But, it should go without saying that fans of dungeon crawlers will gobble Mary Skelter 2 right up. It’s highly recommended to have some understanding of Mary Skelter Nightmares before going into it so the narrative can be fully appreciated.

Overall, 6.5/10: The blood-spattered dungeon crawling continues in Mary Skelter 2. That means the return of the good, the bad, and the messy.