Blue is the warmest color in Blue Reflection: Second Light. 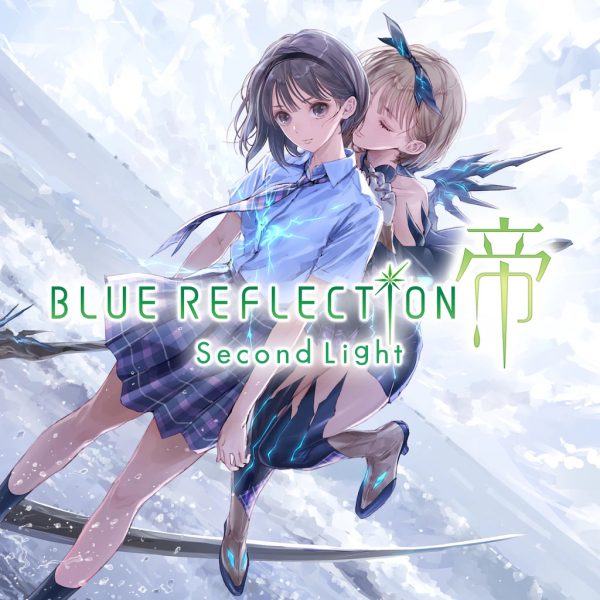 Blue Reflection was an interesting RPG. It was low budget, filled with cringey fanservice, and it got tedious during the later parts of the game. On the other hand, it had a heartwarming story, beautiful music, and some neat gameplay ideas. I never would have imagined that it would receive a sequel. But, a sequel called Blue Reflection: Second Light (Blue Reflection: 帝[Tei] in Japan) was, indeed, released. Second Light has a low budget lack of polish, but that doesn’t stop it from being fun. In fact, Second Light improves upon the first game in every way making it one of the better new RPGs to be released this year.

The game puts you in control of college student Ao Hoshizaki. Ao is an average girl that wishes to be anything but average. She’s always yearned for something more from life. One day, during her normal commute to her summer classes, she drops her smartphone in a parking lot. Upon retrieving it, she sees a weird message from the FreeSpace app that says, “Be Reborn.” In a flash, she’s brought to a world already occupied by three other girls: Yuki Kinjou, Rena Miyauchi, and Kokoro Utsobo. On each of their hands are special rings that gives them the abilities of Reflectors: magical girls that convert emotional energy into power. This new world’s home base is an abandoned school surrounded by water. Beyond the front gates are areas filled with resources that the girls call the Faraway. Ao is confused as to why she’s been brought to this new world, but perhaps for the first time she’ll finally get to feel special.

Indeed, Ao will get more than she bargained for. Second Light’s story is a masterpiece that moves at a brisk pace with new twists, turns, revelations, and reveals every step of the way. Ao, Rena, Kokoro, and Yuki will be joined by other girls during the journey. Each one, blessed with the powers of the Reflector, will arrive without much recollection of what was going on before they entered this strange new world. Ao will help them retrieve their memories while trying to figure out what brought them together in the first place. You’ll enjoy getting to know this cast of ladies throughout the game’s multiple chapters.

The overarching narrative and history of each Reflector could be likened only getting half of the story. The other half comes from Ao helping each girl with side missions or going on dates to spend one-on-one time together. Side missions are straightforward: make something via item crafting (more on that in a second), help a girl reach a certain area in a dungeon, fight X number of enemies, or gift a certain number of raw materials. During a date, Ao and her partner will walk around the school talking about this or that until they reach the Date Spot marked on the map. Arriving at the Date Spot will initiate dialogues where you can have Ao select responses that keep the date moving forward.

Finishing dates and requests will grant Talent Points. These are used to unlock new abilities. Ao’s Talent Level will increase when her friends’ Talent Levels increase. So, not only is it fun to get to know this cast of characters, but it’s beneficial. Unfortunately, the adage of “Too much of a good thing” rings true in Second Light. There’s a sizeable cast of characters. It’s normal to have back-to-back dates and requests pile up all at once. After a while, it can get overbearing feeling obligated to do everything. Early item crafting tends to stall the game’s momentum. The process is like other Gust titles: put ingredients together and hit go. But a good chunk of items, many of which are required to advance the plot, need raw materials that require you to revisit old dungeons and farm enemies. Drop rates are forgiving, but it still pumps the brakes on moving forward. Along with crafting items, Ao and her friends will develop new structures for the school. They range from candy stands to vending machines to storage containers. These structures offer additional combat bonuses. Some can be turned on/off and others are always in effect. Having specific sets of structures on the campus will grant additional perks. It’s fun to experiment with them to fit your playstyle.

Campus life is time consuming and can outstay its welcome but is overall enjoyable. The same can be said (to a lesser extent) for time spent in the dungeons and combat. The dungeons are varied, layered, and saturated with both items and enemies. Puzzles are tossed in a few of them for good measure. Dungeon navigation is straightforward. There are some travel gimmicks that pad their exploration but they’re otherwise easy to navigate. With the push of a button, Ao can enter Stealth Mode to move at a slower pace and avoid enemy detection. Striking an enemy while in or out of Stealth Mode will begin combat with some advantage. Simply touching an enemy will begin combat normally.

Combat in Second Light is a fun mixture of turn-based and real-time. An automatic mode is available that makes the real-time aspect less demanding. Personally, turning the automatic play off makes combat more engaging. When combat begins, your vanguard of three will accumulate Ether Points. These are used to act. Acting requires at least 1000 EP, but you can store EP to perform more powerful abilities. The beginning parts of battle limit you to only storing 1000 to 2000 EP. After acting at least once, you’ll be able to store more. Team members able to store at least 3000 EP will transform into their Reflector attire, which unlocks additional abilities. All of this is happening in real-time. It’s important to try to balance weak and strong attacks to increase the combo count. A damage multiplier will increase with the more hits you land. Overtime, new features will be added to combat. If you think of the combat in Final Fantasy XIII merging with Grandia’s, and mixing extra bells and whistles, then you’ll have a good idea of what to expect. It’s a fun, involved combat engine but the high density of enemies can get frustrating if you’re trying to get from point A to point B. Nearly every encounter, even against the impressively designed bosses, is usually over within minutes.

Speaking of design, Second Light is a pretty game despite some choppiness. Fans of any modern Gust title should have an idea of what to expect from a technical standpoint. However, in terms of presentation, Second Light is stunning. Lots of creative energy went into designing the Faraways and the monsters that dwell within. Watching your teammates transform into Reflectors to topple gigantic bosses will fulfill all your favorite magical girl fantasies. Like the first game, Second Light has an amazing soundtrack. If the gameplay doesn’t strike your fancy, then I recommend checking out some of its music. Finally, every character is fully voiced in Japanese – a perfect fit given the game’s setting.

Blue Reflection: Second Light is a long game. I had 55 hours on the clock by the time I watched the credits roll. Finishing the game unlocks a somewhat generous New Game Plus and another difficulty option. New Game Plus is the only way to achieve maximum Talent for Ao and her friends. As of this writing, I doubt I’ll be going back for more anytime soon. I enjoyed the ride – even when things got repetitive – but I was more than ready for it to be over during the beginning of the final chapter. If anything, I’m excited to see what Gust does next with this series because Second Light was a great step in the right direction. Obviously, if you liked the first game then you’ll like this. I still recommend Second Light even if the first game left you feeling underwhelmed. A great story and cast combine with some new and fun gameplay features to make an enjoyable, heartwarming, and surprisingly fresh RPG.