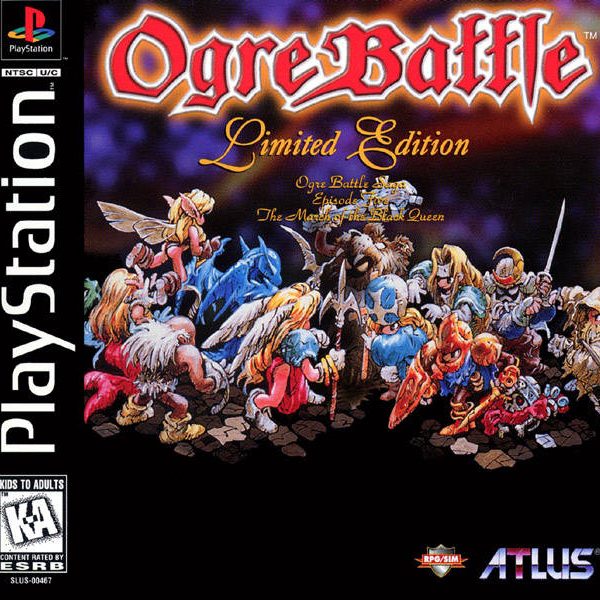 If there is one game that cannot be faulted for content, it’s Ogre Battle: The March of the Black Queen. Whether you play the Super Nintendo version or the enhanced port on the PlayStation, chances are you will sink around at least 80 hours into this game. While much of that time will be you organizing your troops, the payoff is well worth it. March of the Black Queen is a heavy game that combines the RPG genre, the RTS genre and the simulation genre in a unique and demanding way.

The March of the Black Queen’s backstory is basic. Empress Endora conquered the continent of Zetegenia and it is up to you, the leader of the Liberation Army, to free the various countries from her grasp. Really, that’s about it. Most of the exposition happens when you liberate a town or encounter a main character. The dialogue sequences are short; usually a couple of lines thrown back and forth. While this lack of a story might be a turn off, the choices you make throughout the game will determine your alignment so it is still important to pay attention. Some more lore, history and drama would have been welcome but for what little it does have, the game works.

In lieu of dialogue and exploration, most of your time spent with The March of the Black Queen will be on the tactical map of a country that needs liberating. At the start of a new game, you will be asked a series of questions by a wizard named Warren. Your answers will determine your starting stats, your starting alignment, and your initial troops. From there, you will be on your first map. It will be apparent that this is a game that doesn’t believe in tutorials, hand-holding or guidance. You are on your own from the start.

So, what is it you will be doing exactly? First, there is troop management. Your units (most of which can be outfitted with weapons and armor) can be put together to form troops. There are heaps of units and as you get further into the game, you’ll find more to experiment with. There are knights, wizards, griffins, giant octopi, animal trainers, dragons, and so much more. Most of the units will be able to advance in class once they reach a certain level. Making the right combination of units is not only critical to success in battles, but fun. With such a huge roster, there is no doubt that your inner OCD will be having a field day as you attempt to mold the perfect set of units. Once you have your troops set, you will be tasked with finding Endora’s lackey on the current map and defeating it. However, having your troops head directly towards the boss is a rookie mistake. The March of the Black Queen requires careful planning on every map. Instead of rushing to topple the boss, you need to move your units to towns, temples, villages and other locations. Doing this will provide you with information, items, and the chance to draw a Tarot Card. The Tarot plays a major role in this series. Their use in this game can make a seemingly impossible battle turn in your favor so it’s very important to earn as many as you can.

As your units move from place to place, combat will occur when they get within close proximity of an enemy unit. Battles in The March of the Black Queen take a hands-off approach that may turn away some players. Once in battle, you will see your team on the right side of the screen and the enemy team on the left. As the player, you can tell your team to attack the leader, the strongest enemy, the weakest enemy, or the best enemy. You can also use a Tarot Card to deal damage to your enemy or provide enhancements to your team. Other than that, battles will have you sitting back and watching the action. Troops on both sides will exchange blows back and forth. Wizards will cast magic, clerics will heal, werewolves will attempt to slice apart an enemy, and dragons will try to use their breath. After a few rounds, the battle ends. The winner will remain in place and the loser will be pushed back on the map. Battles can be maddening when one of your troops decides to attack an enemy that has full health instead of finishing off one that is close to death. Furthermore, your starting units have a tendency to miss their targets. While battles only last a few turns, they end up taking longer necessary due to the AI making their own decisions. In a sense, it adds to the effect of you being an almighty leader and issuing commands. On the other hand, it can make even the most seemingly easy battles take longer than necessary. The rewards and the gratification earned from finishing off a powerful enemy unit are usually worth the struggle in the end.

The March of the Black Queen makes you keep track of your units and their well-being, as well as ensuring that each town remains liberated. But, there is more. Your alignment not only effects the ending you witness, but it also effects how your army as a whole performs in battle. Time is always flowing in the game. You can pause the game to not feel rushed in organizing your army. But as your troops move from place to place, day will slowly turn into night. If you have a high alignment, your army will be better than the day. Conversely, low alignment means better performance at night.

Despite the slow yet steady pace of the game, there is always something you need to monitor. Luckily, monitoring the game means enjoying the great visuals. The March of the Black Queen’s look might be lacking on the tactical map, but seeing the wide variety of units perform some flashy spells or execute painful attacks never gets old. The look is a simple but effective one that is easy to appreciate given the sheer magnitude of the game. Unfortunately, the music is lacking in variety. Since most of your time will be on the tactical map, you’ll be listening to that theme on a loop. It’s not bad, but you’ll have to get used to it. The rest of the music is well-composed, but the OST isn’t as robust in comparison to other games.

By the time you see one of the endings, chances are you will have gone through nearly 80 hours of your life. And the great thing is, you still won’t have seen it all. The March of the Black Queen is loaded with hidden content, special units, and choices. This means that no two games will end up being the same. As you can see, this is a game with a specific fan base in mind. If you’re a fan of RPGs, you might enjoy this. If you’re a fan of RTS games, you might enjoy this. If you’re a fan of simulation games, you might enjoy this. Only those that enjoy every aspect of the three genres listed, as well as those that don’t mind a challenging title that throws you to the lions will enjoy The March of the Black Queen. Those that do decide to take the plunge, however, will be in for a rewarding experience unlike any other. I gave this game a good score, but I warn everyone to proceed with caution.