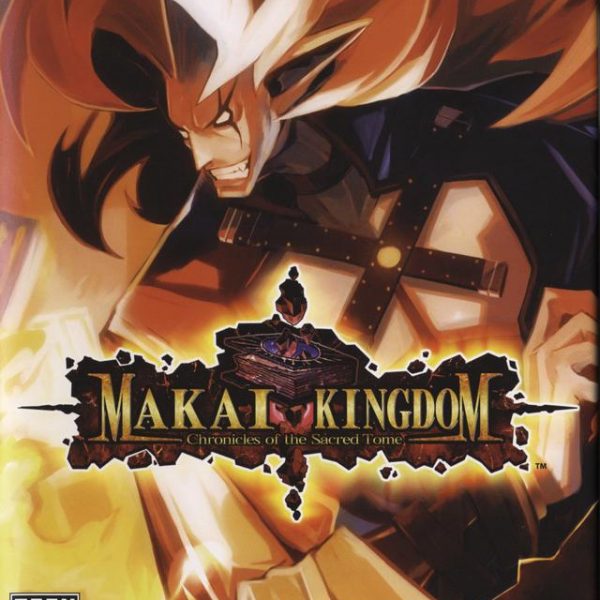 I can’t tell you the last time I played a strategy RPG from Nippon Ichi. I want to say it was in 2004; the PlayStation 2 release of Phantom Brave. By that point, I grew tired of the N1 SRPG ethos: grind, grind, and grind some more to build your character stats to numbers in the thousands. In other words, I knew it would be some time (years, obviously) until I decided to play Makai Kingdom: Chronicles of the Sacred Tome. This is another SRPG that has N1 written all over it. You need to go into these games with the right mindset and a clear head if you want to get the most out of them. Luckily, the endless hours of heavy grinding isn’t necessary if you just want to clear the game. At its core, this is another solid game from the creators of Disgaea.

Makai Kingdom stars the “bad-ass freakin’ Overlord” Zetta. After being informed by Pram the Oracle (also an Overlord) that a book called the Sacred Tome predicts the destruction of Zetta’s Netherworld, Zetta journeys to find the manuscript himself. He finds it, but he ain’t pleased. On its pages are passages describing how Zetta will destroy his Netherworld via his own stupidity. He decides to destroy the book, but doing so starts a chain reaction that could wipe out the universe. At the last minute, Zetta fuses his soul with the book’s. Now half “bad-ass freakin’ Overlord” and half book, Zetta needs the help from other Overlords to reclaim his Netherworld.

This story is out there; even for something from Nippon Ichi. Watching Zetta go from this dashing devil to a hefty tome is entertaining, and the antics don’t stop there. You’ll meet a bunch of hilarious Overlords that are as batshit as Zetta. Sadly, the story moves at a slow pace after the first two chapters. During the middle segments, you won’t be seeing much development with the plot. However, it’s worth it to slog through these parts in order to see the entire thing through. 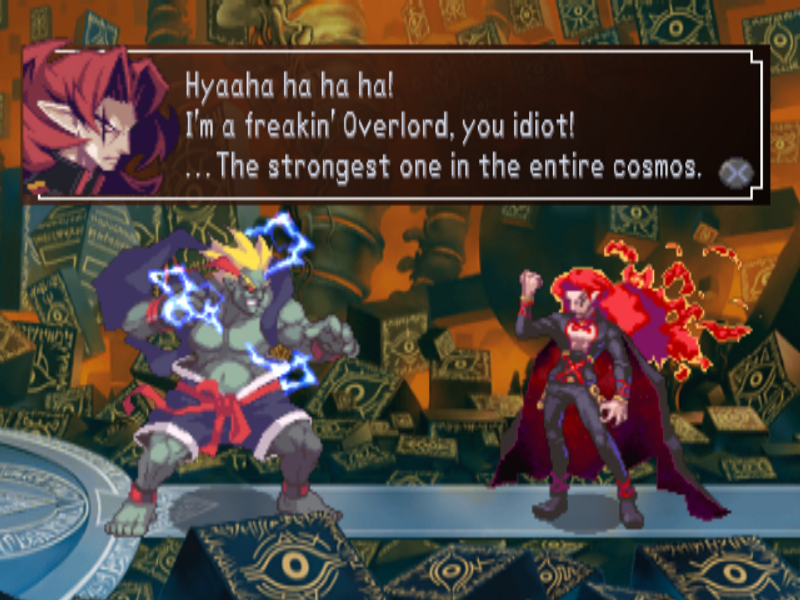 Zetta is an Overlord. Did you know that? He may remind you one or two (hundred) times throughout the journey.

The majority of your time in Makai Kingdom will be spent in Zetta’s miniature Netherworld. Battles are still important, but readying your troops, facilities and vehicles for battle are where the meat of Makai Kingdom lies. After the opening segments, you’ll confine a character to an object. This character will serve as your leader. You can confine units to anything ranging from flowers to rocks to omelets to shoes. This may sound similar to the confining system from Phantom Brave, but the good news is that units aren’t on a time limit. You start with only a small set of class options, but the total number of available classes will be off the chart before you know it. As classes level up, you will unlock new ones. You can also confine monsters. By the end, you’ll have a gaggle of options at your disposal for building your favorite party. And, this is just the beginning. There’s a slew of weapons ranging from traditional swords and axes to the unconventional drills, bazookas, and shovels. There’s another slew of armor and accessories. There are vehicles that can be upgraded and decked out with different parts. There are facilities you can build that can house your units. The bottom line is that Makai Kingdom has an addictive character building system that will have your eyes glued to menus for many hours. I’m not even going to bother getting into the reincarnation system, accumulating Mana, or asking Zetta to grant wishes. Despite its heft, Makai Kingdom does a good job of slowly introducing all of its features to you. I felt overwhelmed moments after Disgaea began. That wasn’t the case with Makai Kingdom.

When you’re ready to see if all of your preparation was worth it, it’s time to head into battle. At the start of a chapter, you’ll select one of the Overlords to shape the battlefields. Ultimately, this impacts the challenges and rewards for the upcoming battles. Since Zetta is a book, he can’t participate in battle in the traditional sense. Instead, he’ll Invite your squad into battle. This isn’t limited to characters, of course. You can invite the above mentioned facilities and vehicles, too. Similar to Phantom Brave, characters can move within a circle instead square by square. Using a familiar player turn/enemy turn system, you move your characters to attack enemies, pick up objects, throw said objects, or even invade an enemy stronghold. But, for the most part, your time will be spent laying waste to the opposing forces. However, the battle may not be over after you clear all of the enemies. Finishing a battle requires you to earn a certain number of points. These are earned via killing enemies and destroying objects. You can choose to end the battle after you earn the required amount, or you can keep the death toll rising in hopes of earning greater rewards. Some enemies or objects are labeled with the word “key” above them. Destroying these will open up new portions of the map.

There are some extra things that shape Makai Kingdom’s combat into more than just a typical strategy RPG. But, they’re beyond the scope of this review writer. However, I do want to mention something that I’ve always found problematic with strategy titles from Nippon Ichi; at least the ones that I’ve played. Makai Kingdom has a severe issue with balance. For the first three or four chapters, things will be going relatively well. In fact, you might be able to finish a battle in one turn with the right setup. But, there’s always that one battle that seems to ruin the flow of the story. So, you’re left with a choice. Do you try again? Do you grind? If so, how much? Do you just build a few levels? Do you reincarnate and start from level one? No matter what you do, you will likely have to do it again. The later chapters in Makai Kingdom are brutal. The only surefire way to achieve victory is to implement a tried-and-true “kill them before they kill you” strategy. Battles move at a brisk pace and can end within minutes. You don’t need to grind as much as you would in Disgaea. Still, it gets redundant. Makai Kingdom is another game that encourages you to grind since the best “strategy” is always to hit things as hard and fast as possible.

If you’ve played anything on the PlayStation 2 that came from Nippon Ichi, then you’re fully aware of what to expect with both the graphics and music in Makai Kingdom. Most of the game is shown with adorable, multi-colored sprites that represent the gargantuan number of classes you’ll send throughout the battlefields. Speaking of which, battlefields range from plains to cities to deserts to graveyards. The graphics really shine when you’re watching the story unfold. Zetta and the other Overlords are still shown in 2D, but the sprites are much bigger, much fuller, much brighter, and much more detailed. It would have been cool if these were the same ones used in battle. The special attacks and spells used in battle are as bonkers as you’d expect. As for the music, it’s mostly forgettable. A battle tune here or there might have you turning the volume up a few notches, but that’s it. The theme you’ll be hearing the most at your home base will outstay its welcome. Finally, we have the voice acting. It’s good, but not great. Zetta is voiced well. Others could use some work. Pram’s voice actress is the biggest offender. You can opt for either Japanese or English voice acting.

Makai Kingdom’s story isn’t long. With the right preparation (and grinding) you can finish it in as little as 20 to 30 hours. However, the appeal of Makai Kingdom is similar to other strategy RPGs courtesy of N1: a massive amount of post-game content and the ability to power up your team to levels in the thousands. With all of the stuff you can unlock and create, Makai Kingdom can last up to 300 hours. I’ll admit that a part of me wants to keep on playing to see all of the classes, structures, and vehicles. The thought of demolishing everything I come across is appealing. It’s just the amount of time you need to invest would take away time from other games. So, Makai Kingdom is a one-and-done deal for me. Just know that there is plenty for you to do after you finish the game the first time thanks to both a New Game Plus and the amount of things to unlock. But, Makai Kingdom isn’t for everyone. Fans of traditional strategy RPGs will be surprised by how different it is from its peers. Similar to the Disgaea series,  you need to be in the right mindset if you want to fully enjoy the Makai Kingdom. If your mind gets there, then get ready for an oversized Overlord adventure.

Overall, 7/10 – An overload of  Overlords. Makai Kingdom has the “traditional” Nippon Ichi strategy elements thrown into a new and silly universe.